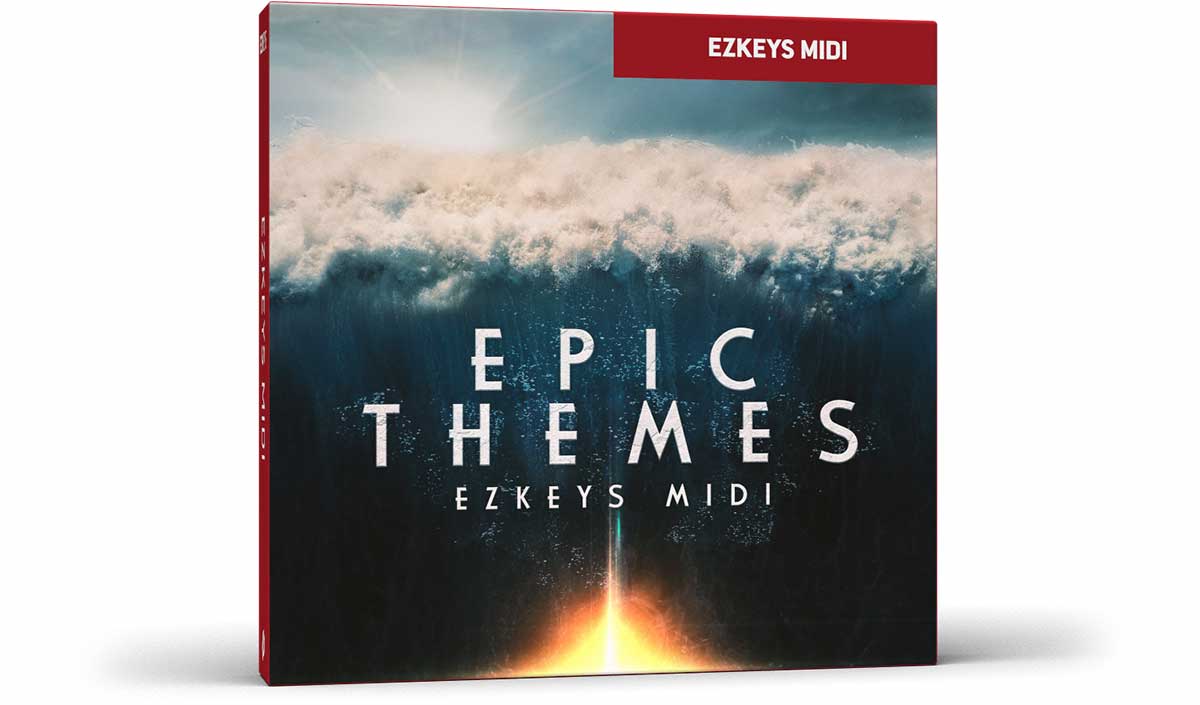 Adventure, drama, fantasy, action or the borderless imaginary world of animation – without the aid of epic themes and soundtracks, most would fall flat. With an absolute weightless effort, music can set a mood, tell a story or convey an emotion. It is simply a language of its own.

This EZkeys MIDI pack was inspired by larger-than-life movie themes, all with that bombastic blockbuster feel, and celebrates the ultimate power of music as a narrator and its majestic force as a storyteller. Whether for the silver screen, for when the curtain drops, the credits roll or for any song or idea that calls for a monumental touch, the Epic Themes EZkeys MIDI pack has something in store – from deceivingly ominous to full-on action-laden.

Prepare for a veritable odyssey of epic MIDI themes that will have you create music that’ll send shivers down your spine.

For these pieces, you wrote the tonal compositions using the Epic Themes EZkeys MIDI pack. Tell us what the process normally is like for something like this!
First I listen to the combined patches, to get a sense of the piece. I will work from the centre out, so main melodic section first, intro and outro second. As there are variations in the melodic MIDI, it’s great to experiment with accompanying melodic lines. Next up is the arrangement, which I will do completely within EZkeys. This is the layout – the story – of the piece. Then it’s orchestration, choosing which instruments play what lines. Then there is a lot of editing, as a lot of orchestral VSTs have a lot of delays associated with their various legato types. Finally, I’ll draw in all the automation, before starting on the mix.

Your production also features other Toontrack products, most notably the Orchestral Percussion SDX. Now that it has been available for some time and that you’ve had the chance to utilize it in your day-to-day work, how has your workflow changed and how has it helped you?
It’s great to have so much instrumentation and variety inside just the one plugin, which can then be output on as many channels as you like. It really helps to keep the track count down in bigger projects.

We know you’re a big fan of our EZkeys MIDI packs. How do you generally use them in your work?
I use them when I’m stuck for an idea or as inspiration, but I also use them to flesh out orchestral parts. I am working on a film at the moment, where I have used EZkeys MIDI to flesh out the strings backing in a song, as well as the Big Band MIDI, as this was a great way to get a track off the ground in a style I am not used to composing in.

When you get called up to do a music piece, what does a brief generally look like? Do you get musical pointers and reference tracks or is it more loose and up to interpretation?
Both. When directors or producers know the what they are after, that makes my job much easier. While it’s always nice to have a lot of creative freedom, it is sometimes very difficult to give clients what they want when they don’t know what that is!

Do you always get to see the visual aspect of a production before you write or do you sometimes base your idea on a written script or treatment?
With film, I will always score to picture. In pretty much every other form of media I am creating the music at the same time as filming, so the core of the writing has to be done before I see anything and the director will guide me. I will then add the details and the final production elements to the final picture.

Check out the earlier releases in our ongoing Movie Scores series!

NEED SOME EPIC
SOUNDS TO GO WITH IT?

An epic theme isn’t complete without some equally epic timpani rolls, bass drum crescendos or cymbal swells. And why not try some out-of-this-world, prepared piano sounds?