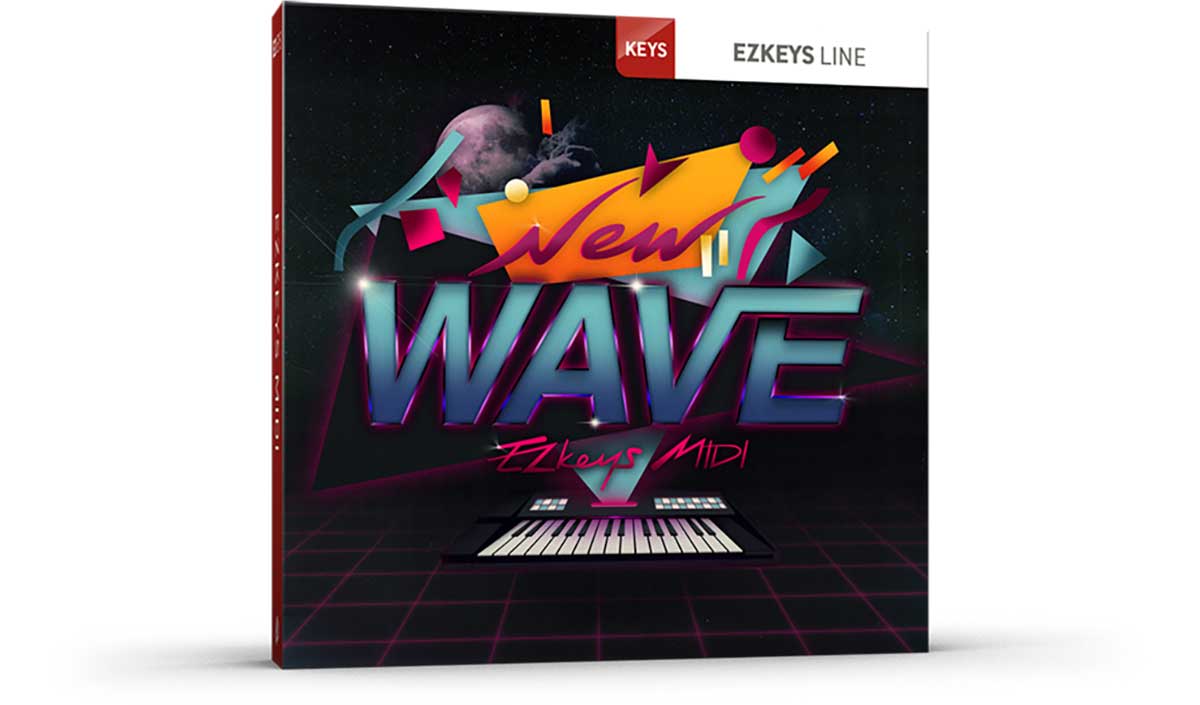 A NEW WAVE OF IDEAS.

Piano and keyboard variations inspired by the new wave of synth-driven pop predominant in the ’80s.

While stemming from the post-punk era of the late ‘70s but eventually becoming more and more synonymous with the budding synth-pop scene of the early ’80s, the catch-all use of the term “new wave” has been subject to debate and stylistic confusion. However, monumental success of acts like Alphaville, Eurythmics, Depeche Mode, Duran Duran and a host of others in many ways claimed the genre, making their synth-driven pop the predominant soundtrack in the ’80s and well into the ‘90s.

Inspired by the greats of the era, this collection of EZkeys MIDI picks up on the edge, the attitude and the over-the-top approach to songwriting and melody often attributed to the genre. This is the perfect collection of EZkeys MIDI for anyone looking to write ‘80s-inspired pop songs that have a different melodic flair. Ideal for use with EZkeys String Machine, EZkeys Mellotoon, EZkeys Electric Grand – or any timeless acoustic piano, for that matter. Start experimenting!

When and how did you discover your passion for music?
– Pretty early… Perhaps when I started to hammer the upright piano we had at home at the age five or six. That’s some kind of passion I guess! :). I think a turning point, passion-wise, was when I started playing different stuff than the classical piano that my mom wanted me to play. When I started playing in bands and such, 14-15 years old there about.

How come you ended up playing the keyboard?
– I had a piano at home, growing up. Mom taught me at first.

You have recorded several titles of MIDI for EZkeys by now. Explain a little about the process of recording one of these packs.
– I usually start by listening a lot to a playlist of songs. Get a feel of the genre. A vibe. Then usually a couple of ideas tend to emerge quite early. I switch a lot from the different songs/sessions I’m working on in the beginning. Like, if I’m recording a Stevie Wonder-kind-of-thing variation number 3, and suddenly feel like I have the Ray Charles take on this, I instantly open a new session and record the new idea. I find it easier and more fun to work this way – to never stop the creative process. To go with it. Instead of the well-I-really-should-be-doing-this-right-now-approach. And force it. There´s always time to edit/erase/change things up and record variations at a later stage. That’s a different kind of creation I think, like what to add, what to remove, more of this and that, or doing a very sparse take.

During the ‘80s, new wave really exploded and took on a somewhat more synth-driven direction. Was it different creating this EZkeys MIDI pack compared to the more “acoustic” genres you have covered before? Was your thought process different?
– Well, I go about just the same way as the more acoustic stuff. I listen to a lot of music from the genre and time period. Perhaps I tweaked my sounds a bit more. I think it’s vital for the performance to have your sounds figured out and working properly to each song. The CP80 wide choruses sounds, or almost liked a dubbed upright at some occasions, or the more gritty, compressed and distorted pianos (Clash style). More tweaking before recording, I would say to sum it up.

Name some of the biggest sources of inspiration behind this collection?
– Ultravox, Duran Duran, Human League, The Clash to mention a few. It’s also great inspiration watching old YouTube clips and see artists perform live. That’s another piece of the puzzle, I think.

What do you hope users will take away from using this pack?
– The main thing is inspiration. Whether it’s composing in the style of the new wave era or just to get inspired by using this stuff on completely other styles of music. I think the music climate of today is a lovely mix from varying styles, new and old, and using stuff from the new wave genre to create modern music would be a really great idea if you ask me!

Martin has collaborated on several EZkeys MIDI packs over the years, spanning all kinds of styles. Below is a selection!