BACK TO THE EIGHTIES.

An EBX that merges electric and electronic, just like the eighties!

Much like the decade itself, The Eighties EBX is a merge of electric and electronic. It comes with two individual instruments, one high-end electric bass guitar as well as one classic analog synthesizer, each handpicked for their individual qualities and overall influence on the music of the time.

In addition to the instruments themselves, The Eighties EBX also includes a wealth of presets for a wide range of tones as well as a custom library of MIDI, allowing you to start writing and producing from the get-go.

If you’re looking for the ultimate palette of ’80s-like bass tones designed to work in anything from pop and rock to all-electronic new wave or synth pop, this is it. Welcome to your new go-to EZbass expansion!

When looking to provide the two essential session staples that could encapsulate the sound of ’80s bass, the choice was easy: the Wal Mk1* and the iconic Minimoog Model D.*

From the outset back in the late ’70s, Wal’s ambition was as simple as it was bold: to build the ultimate session player instrument. In order to accomplish this, the then-small team designed virtually every component that went into it from the ground up, involving top players and producers in the process. In 1980, the first 20 prototype custom basses were made available, now known as the Mk1 (which is the same model as sampled for this EBX). In the years to come, the popularity of the brand grew and the Wal bass became a mainstay in the UK session circuit and around the world.

Although the first Wals surfaced more than some forty years ago, still to this day each and every bass that leaves the shop is produced with the same luthier ethos and scrutiny.

The synth that changed everything.

In an effort of offering an affordable and portable option of a modular synth, the Minimoog* was launched in the 1970s. In terms of synthesizers, the impact it had on music on a whole is unparalleled. Seeping through to virtually every facet and style, it became a lynchpin in the development in anything from funk to hip-hop and would even later come to lay the groundwork for altogether new genres. Aside from the fact that it was portable and that artists were able to finally bring the keyboard out of the studio and to the stage, the thing with the Minimoog was that it could carry a melody just as well as it could serve as the backbone of the rhythm section. Indeed, it was just as much a bass as it was a keyboard – a fact underlined in countless songs during the era when it perhaps made its most famed contributions: the eighties.

The instrument in question for this EBX is a completely restored, recapped and calibrated Minimoog* Model D Rev. 2 from 1976. Simply put, it’s a piece of history – sampled and tweaked to virtually scream eighties bass in every fabric of its being.

The electric bass guitar was captured using both finger and pick articulations, allowing you to get a traditionally warm and round tone at the same time as you’ll have the option of more edge and bite using the pick.

When sampling the synthesizer, nine different configurations of the physical knobs were chosen to best represent the role it played as a rhythmic bass instrument back in the ’80s. For every physical configuration of the synth, each of its three oscillators were sampled individually so that the Toontrack sound designers could build complex presets utilizing different effects on each. This gives you control and sound design possibilities beyond what is possible with the actual hardware instrument.

“This synth has played an immense role as a bass, which is exactly what we wanted to portray with our take on it. We ended up diving headfirst into the bottomless well of songs it was used in during the era and modeled our sounds after some of the most striking examples,” comments Ulf Edlund, EZbass lead sound designer.

The product includes a custom selection of presets for each instrument, all modeled after either iconic productions in which the original instruments were used or the overall sound of the era. Offering anything from classic and clean to heavily saturated, experimental and distorted, this library of presets will give you a broad array of mix-ready tones. 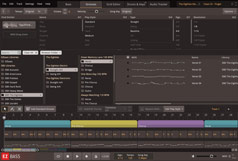 This EBX comes with one library of MIDI per instrument, each presenting a tailored repertoire of material. Expect a fundamental collection of MIDI that you can use the onboard features in EZbass to customize, slice and dice to fit your already written songs or use as a creative springboard for your yet-to-be-written tracks.