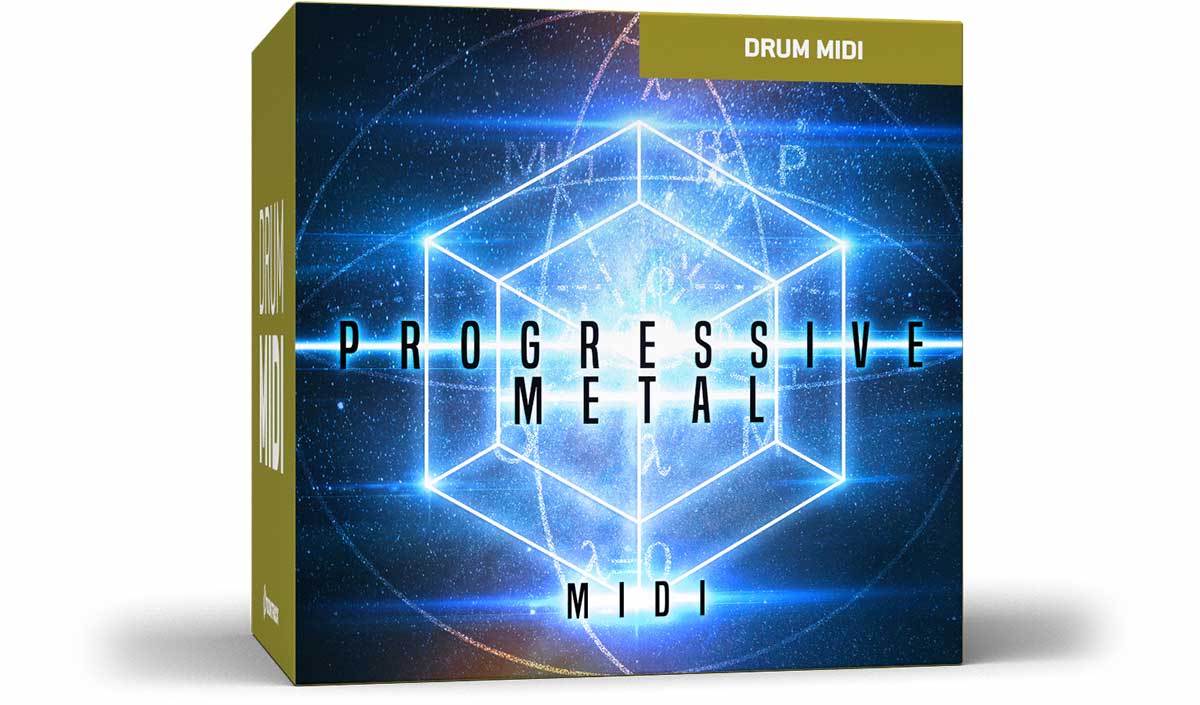 Tesseract. A four-dimensional hypercube presenting almost endless possibilities in the world of space, time and geometry. Project this cubic prism science on the world of MIDI and an infinite maze of unexplored space unfolds. At a glance, just tiny dots in the grid of your DAW. Combined, a composite of perfect symmetry that can be changed, rearranged and pushed beyond the confines of imagination. Welcome to the MIDI matrix.

The Progressive Metal MIDI pack was performed by Jay Postones of TesseracT and is loosely based around his own catalogue with the band. Expect a collection where the complexity of fusion, the subtlety of jazz and the raw, unfiltered power of metal intertwines to a form a polyrhythmic alloy of hard-hitting, ghost note-riddled sophistication.

These are drum foundations pushed to the limit of technicality, performed with razor-sharp finesse by one of the world’s premier progressive metal drummers. 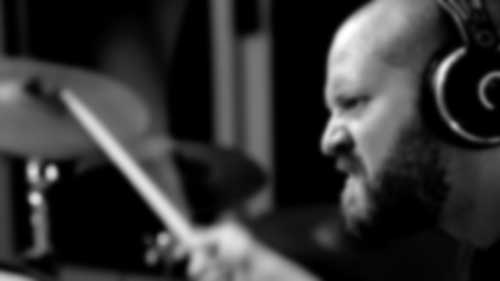 When and how was your interest in music sparked? And was drums always the instrument you strived to play?
When I was three, my parents bought me a small keyboard for Christmas, which I just knew how to play. I can’t really explain it. At age 11 I switched out keyboard for drums and started playing in a school band. My family pooled together to buy me my first drum kit (a black Hohner LEX). I was just playing for a hobby really until I heard the song “Aja” by Steely Dan – and Steve Gadd’s performance on that track… I knew at that point that I was going to be a drummer.

You grew up listening to what was playing on your dad’s system: Steely Dan, Neil Young and Pink Floyd snd have said that you are not really “a metal” guy per se. How come you ended up playing what, at least to most people, would be categorized as metal?
I developed my own musical taste quite late. I never liked the old school metal bands, like Metallica, Megadeth etc., the music just doesn’t appeal to me so I never gave metal a chance. I was probably 18 when I first heard heavier music that I liked, and it wasn’t even really that heavy… It was Incubus. That band bridged the gap for me between what I’d consider to be intelligent music and heavy music -– and helped me find other heavy bands I liked. I was obsessed with Meshuggah and Dillinger Escape Plan in my early twenties, which was around the same time I first heard the early TesseracT demos. I listened to those a lot until I built up the confidence to ask Acle (the main writer in Tess’) for an audition. The rest, as they say, is history.

From what we understand, Superior Drummer 3 is a pretty pivotal part of the band’s creative process, both when Acle is sketching out groove ideas for riffs and for you as a complement to writing finished parts on the regular kit. Tell us more about the process of how TesseracT’s songs come together.
Absolutely, so without Superior Drummer, there would be no TesseracT. When I first heard the band, I didn’t know that the drums were programmed – I don’t think I even knew what programmed drums were. Acle introduced me to the software and the way he writes, which generally starts with a ridiculous drum groove being created by hand using Superior Drummer. It completely refreshed the idea of creative drumming for me – writing a drum part that I can’t play, using the best software, then learn it by listening to it (a lot). It’s revolutionary. We can play the track back at any speed and it sounds like a drummer is sat there playing it in front of me. It helps me to visualize what I need to do to perform it. Then, once the beat is in my head, I start to tackle it behind the kit.

You’re a very modern band in the sense that the members are from all over and that you largely get your music together individually as opposed to collectively. Is the collective jamming and writing scenario something you’d like to try at some point and if so, do you think your music would come out any different?
We talk about doing this a lot. Especially after a few beers, late at night on a tour bus. But then we get home and slip back into our routines, which so far have worked really well for the band. I personally don’t see us getting in a room together and attempting to jam through random ideas, mainly because it takes each of us so long to learn the grooves and rhythms, to come up with it in a jam session… I’m not sure. Never say never, but probably…never. Maybe when we’re 50 and all out of ideas!

As a Iive band, and like most modern acts today, you relay heavily on technology. You have MIDI controlling guitar effect units and a computer that runs the click- and backing tracks. Have you ever experienced any breakdowns?
We’ve left the “loop” setting on a couple of times, which is awful. We’re playing along, then a riff starts over again and we all look at Acle as he sprints off stage to put things right. That’s happened maybe twice and I pray it doesn’t happen again! We used to suffer from skipping hard drives in the early days too, until solid state became the norm. The most regular breakdowns are usually hang-over related – someone forgets to switch guitar or tune to the correct tuning.

What drums do you use live and in the studio?
I’m a DW guy, live and studio. Sabian cymbals and Evans heads. It’s important to say though that every TesseracT album since “One” has used Superior Drummer. We write using it and it’s an important part of TesseracT’s sound. We would like to record an album in a studio again, as a band, but we find the way we work at the moment allows us to work on the material for a much longer time period, which if you ask me, makes a huge difference. If we had to write, demo and record, the songs just wouldn’t be as polished.

What is your relationship to e-drums in general?
I bought a Roland TD-9 so that I could learn the early TesseracT songs at home and audition for the band. That was my entire experience with e-drums until recently when Toontrack asked me to create a MIDI pack. I used a Roland TD-20 which opened my eyes to the possibilities of e-drums. Since then, I’ve been down to Roland HQ in London to try a TD-50 which they’re very kindly going to loan to me. I’m really interested to see how I can utilize a kit like this with TesseracT especially when it comes to writing.

For this collection of grooves, what was your train of thought and what were you looking to cover?
I wanted to lay all my cards on the table and attempt to record every conceivable variant of every groove that I could think of. They’re all based on TesseracT songs, so we set up my favorite live tracks and I started jamming. We pulled out the best parts, looped them and recorded ten to fifteen different ideas over the original track. The whole point is to give a stack of humanized grooves which can be used to write a heavy groove-based song. Or you can just use a single groove to get inspired as we all know, starting a new song from scratch can be difficult. For me it’s especially exciting as I get to feature on an untold number of new songs by a world of creative people. What an honor.

To you, what defines a great drummer? Name a few that you think stand out in today’s scene (regardless of genre) and some that helped shape you as a drummer growing up and learning the instrument.
I’ve already mentioned Steve Gadd. Historically, Tomas Haake (Meshuggah) is a big inspiration for me, Danny Carey (Tool) and Morgan Ågren too. The drummers who inspire me the most these days really are my peers. I get to tour with guys who have such great ideas and unique approaches to their playing, I take something new away from each tour. Guys like Troy Wright, Blake Richardson, Matt Garstka to name a few. I occasionally find myself on an Instragram drum-binge watching guys like Tony Royster Jr. absolutely next-level-shredding. To me, a great drummer is someone who lets their personality and creativity lead their performance. Someone who doesn’t need a crowd, or better yet, can perform for themselves and let the audience simply witness. It’s inspiring for me to watch a drummer who is effortless and comfortable within the trance of their performance – as I know that feeling and recognize that it only comes to me when I’m 100% confident in my ability. To me, that makes a great drummer.

Finally, what do you hope users take away from using the MIDI grooves you recorded for this pack?
I hope it inspires creativity – that’s all I really want. If you can take one of my ideas and use it to start your own song, or take a bunch of ideas to form a whole song structure, then you’re doing exactly what’s intended. This is a tool which can help to break you out of a creative black-hole. If you’re not stoked on your own ideas at the moment, then take these and run with them, develop them, turn them into something totally – then find a drummer to play them (…I give lessons…).

Big festival or small club gig?
A full small club gig. Festivals are great too but usually rushed, sleep-deprived and rarely using my own kit.

Dream team band (with you on the drums!):
Maynard (Tool) or Devin Townsend on vocals, Frederik (Meshuggah) on guitars, Victor Wooten on bass – and I’ll take Morgan Agren as a second drummer so I can steal his ideas.

The five most important records in your life!
In no particular order:
Meshuggah “Nothing”
Tool “Lateralus”
Incubus “Science”
Steely Dan “Aja”
TesseracT “One” (…yes…)

The worst thing that ever happened to you on stage?
In Chicago two years ago someone let off a can of pepper spray on stage. That was pretty bad. Other than that, I’m going to say James Monteith’s bodily gas during smaller club shows.