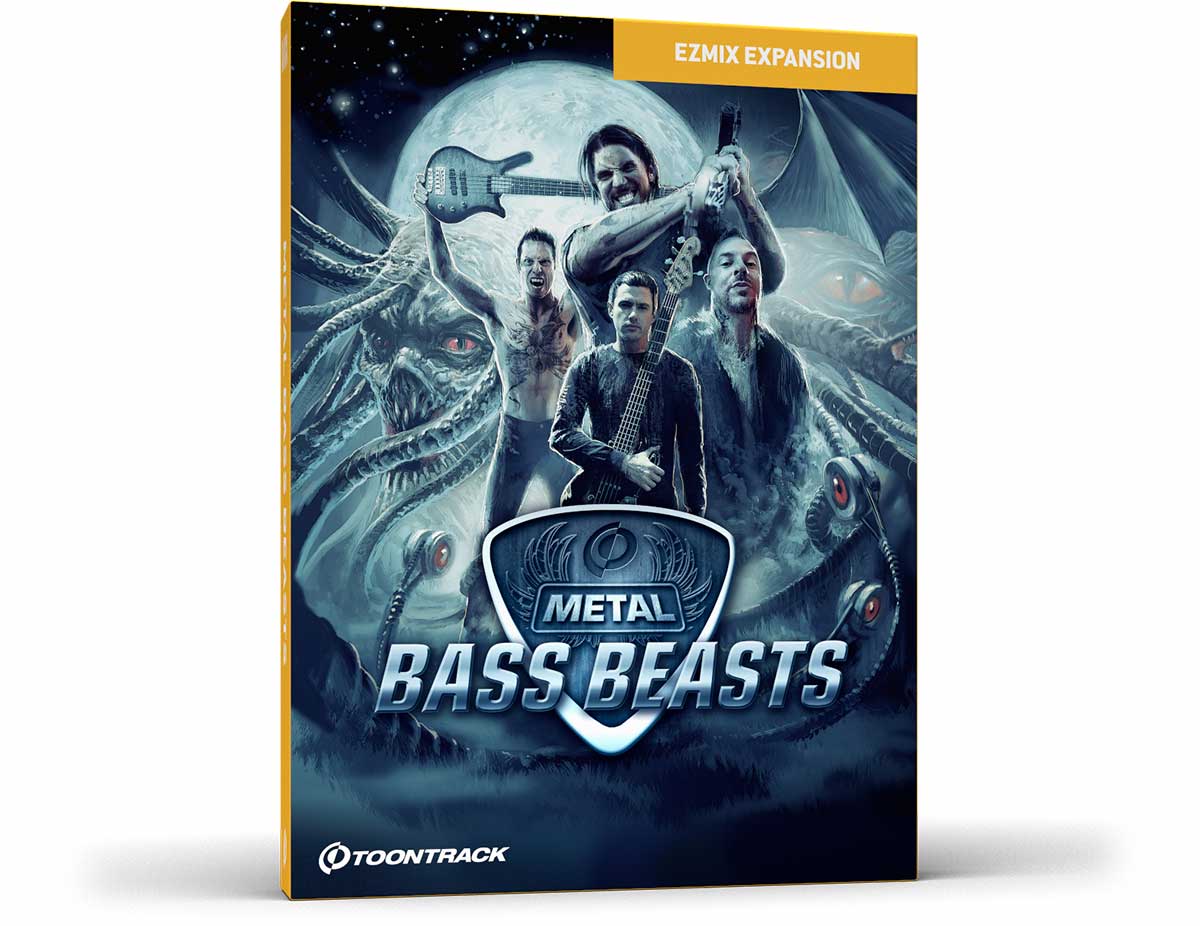 The Metal Bass Beasts EZmix Pack pinpoints the essence of rock and metal bass today and gives you a vast library of unique one-click settings, tailored for songs where the bass is all but just a frequency. 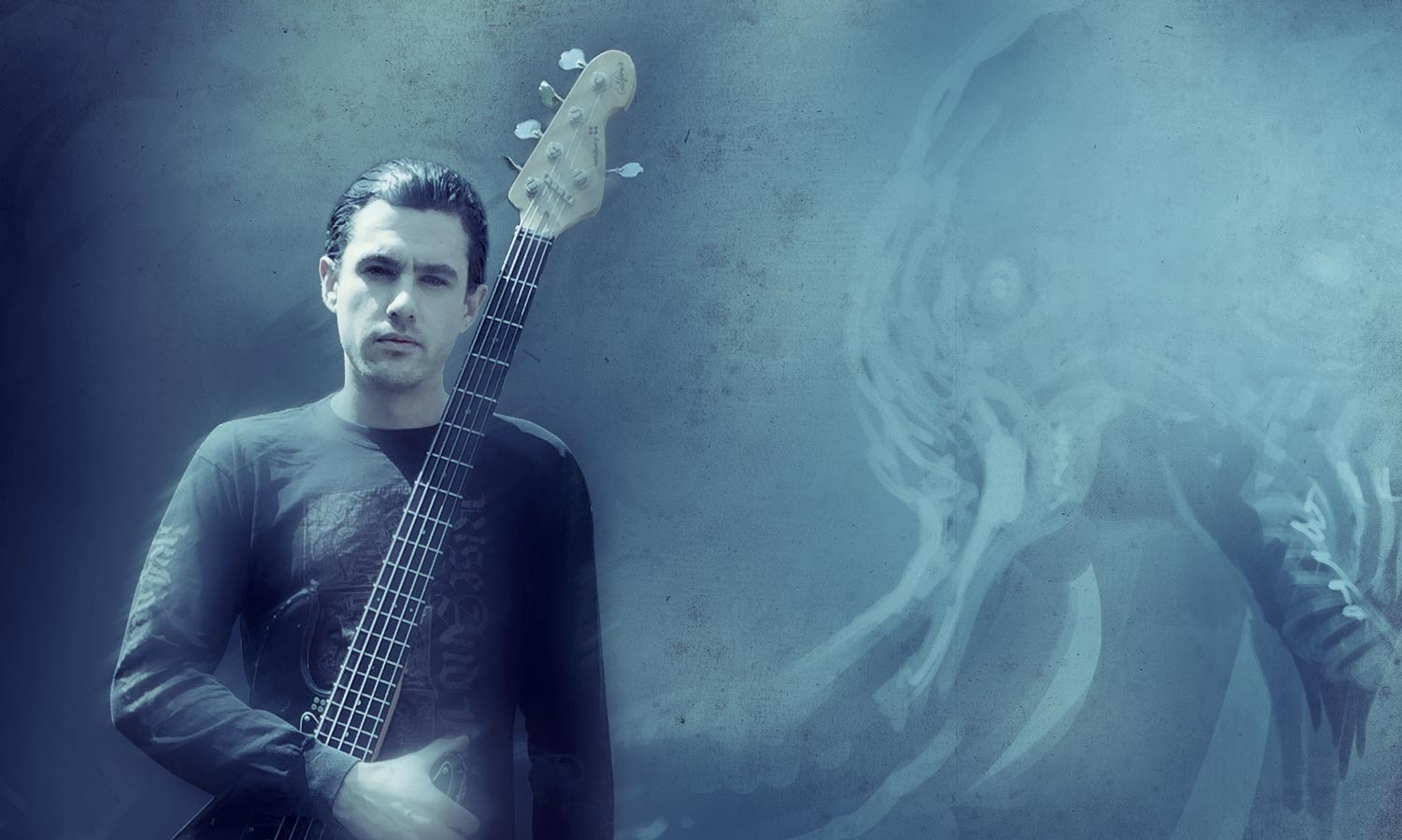 A quick gear rundown, please!
– For this I used my Sandberg TM5 bass. I use Aguilar Amplification and Dunlop strings, Fractal Axe-Fx II.

What’s your recording setup like?
– Simple home studio. I run through either a Port City Orleans All Tube preamp or a Warwick Solid State Hellborg preamp into Logic or Pro Tools. Most effect stuff I do in post, using a variety of plug- ins.

What Toontrack products do you regularly use?
– Superior Drummer 2, but I also still love the EZdrummer stuff.

How come you ended up playing the bass? Was it conscious decision right away or did you start out on the guitar?
– I’ve always been a bassist since day one. I like the idea of being in the background and just holding it down for the band. I’ve gone beyond that with solo stuff but that was the original appeal.

If you had to name one bassist that influenced you the most, who would you say?
– Victor Wooten.

…and what bassists do you think stand out today?
– There’s a million. A lot of them are the legends that are kind of implied. Guys I’ve been inspired by lately are Hadrien Feraud, Bubby Lewis, Or Lubianiker – and the list goes on an on. There are too many to name.

If you could put together a dream-team of musicians to form a band with, who would they be?
– My personal dream team was largely made up of the people I had play on my second album “Your Itinerary”. If I added anyone to that group, maybe Holdsworth for leads and Coltrane on sax. Hahahaha. A guy can dream!

Walk us through a typical day ”in the life of”.
– A day at home is pretty regular. A day on the road is chaos. Get to a town. Load in and sound check. Maybe teach a lesson or two. Try to find time to eat. Try to find time to warm up. Play the show. Tear it all down. Try to get some sleep and do it all again!

What’s the weirdest thing that ever happened to you on stage?
– One time, this punk band I was playing when the stage lit on fire, and I had already bit my tongue really badly to the point of bleeding. Then the venue workers came and sprayed the stage and all of us with a fire extinguisher and the white stuff got all in my mouth and in the cut on my tongue and burned really bad for a few days. That was probably one of the weirdest things. 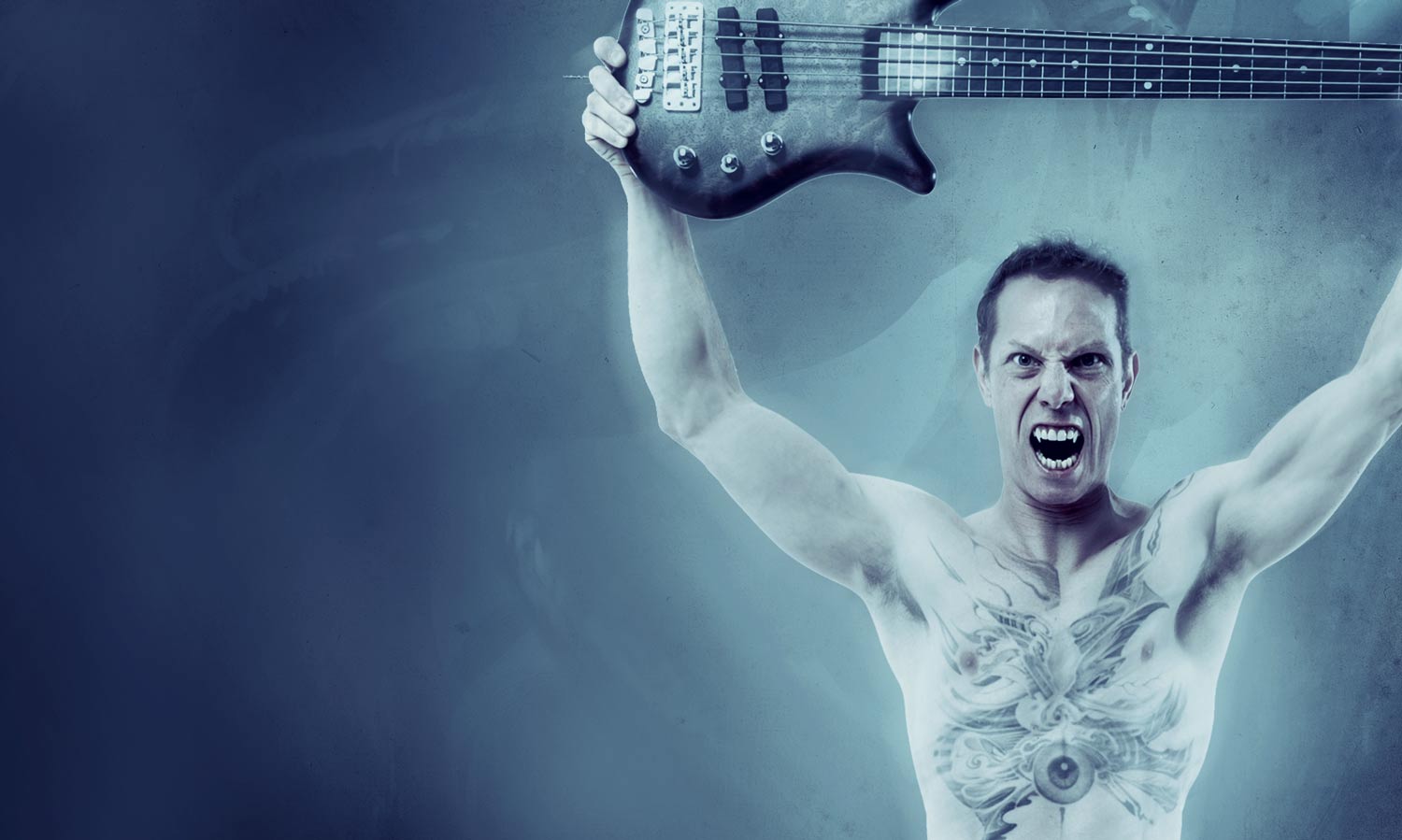 What Toontrack products do you regularly use?
– EZdrummer is the one that comes in the most handy when you need to get something going, fast!

How come you ended up playing the bass? Was it conscious decision right away or did you start out on the guitar?
– My father’s guitar was the first stringed instrument that I played. I still love playing guitar, but I do most of my writing and playing on the bass.  It’s hard to say exactly why I started playing bass; I think it starts with loving the sounds that a bass makes (or is capable of making). Big, bottom end frequencies feel so warm and fulfilling.  From the more cerebral side; bass pulls from the melodic, harmonic, and rhythmic elements of the music, therefore providing a sort of musical glue that binds the other elements together.  I love participating in that.

If you had to name one bassist that influenced you the most, who would you say?
– There are far too many bass players for me to pick a main influence.  I would be doing a great injustice to the one hit wonders of my particular bass world by choosing only one cat.  Some songs carry so much weight that they really transcend favoritism.  Bass players are like that to me; I have songs I’ve heard only once that are indelibly impressed on my mind.  There will be more bass players and music in my life, therefore rendering the idea of a favorite invalid, in a way.

…and what bassists do you think stand out today?
I really like what Nick Schendzielos is doing with the instrument.  He’s blending modern and traditional  techniques in a proper setting.  He’s experimenting with different tunings, gauges, and scales.  I like that kind of open approach to creating music, and he’s championing the cause.

If you could put together a dream-team of musicians to form a band with, who would they be?
Hmmm.. Dream Teams.. Not really into them.  I really like things to happen organically, and a dream team seems hardly that.  Of course there are a ton of artists that I’d love to see collaborations of/with, such as- Michael McDonald sings Billy Ocean songs….. , but the list could go on and on… Rick Astley does, Frankie Goes to Hollywood’s “Relax”…. Coldplay’s Chris Martin teams up with R Kelly for a remix of “Yellow”… Kanye sits in with GWAR…don’t laugh, it could happen!

Walk us through a typical day ”in the life of”.
– My days are pretty simple, really.  Up out of bed to let the dogs out. Water all the potted plants, and garden when needed. Make coffee and breakfast, and read the news….shall I go on.?.. The most exciting thing I do every day is make music.  It’s the thing that let’s me live. Makes me live.  All the rest is just nonsense that circles the ever-present musical black hole that beckons me, that practically begs me to keep at it, lest I find myself even more boring than I thought.  Just don’t tell my friends and family I said that. 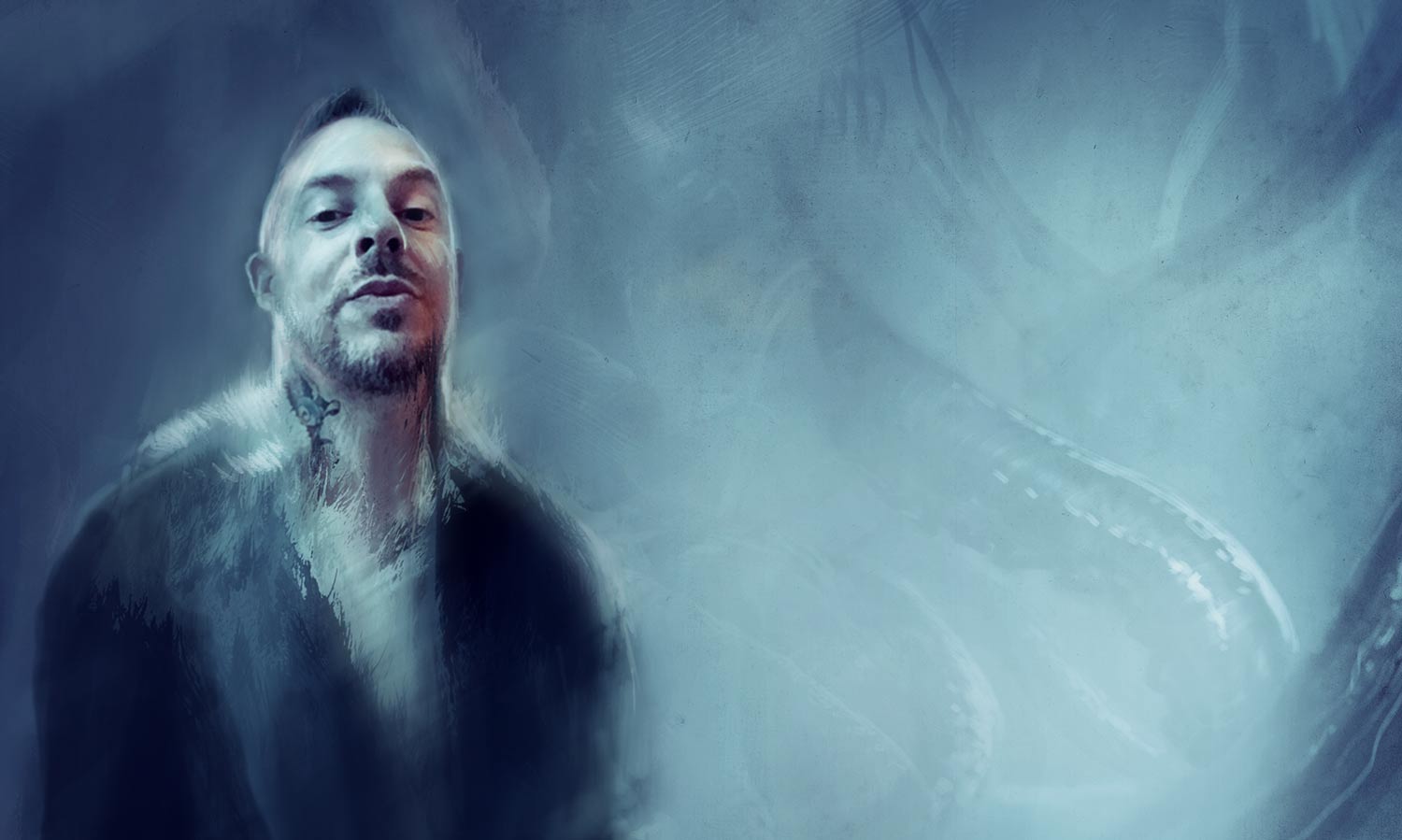 What’s your recording setup like?
– My recording set up varies- depending on the session. A lot of the time I’ll plug my bass into an Aguilar preamp/DI and just go straight in with some compression. For some growl I’ll mix in a Dunlop bass distortion. If I wanna go crazy, I’ll run thru the DI and mic my GK cabs

What Toontrack products do you regularly use?
– I’ve been using EZ drummer tons as well as some of the cool mixing effects on a lot of my recordings. Love em.

How come you ended up playing the bass?
– I started off playing drums at a very very young age. I come from a family of musicians, parents, grandparents, etc. My grandfather pretty much played every instrument there is, and taught me a lot, including exposing me to the bass guitar.

Was it conscious decision right away or did you start out on a different instrument?
– Growing up, we had to move into an apartment from the house that we lived in, and I couldn’t really bring the dum kit with us. So, I pretty much swapped over to bass from drums kind of quickly and by necessity. One thing I’ve always loved about the bass is it being the bridge connecting melody+rhythm. I could play drums on bass and make “music” at the very same time! Eventually I started playing guitar and keys later on, but the bass stuck. It was me.

If you had to name one bassist that influenced you the most, who would you say?
– If there was one bassist that I would say has influenced me the most I was say wait…. There’s so many!!!  But I think that Flea and Pino Palladino- I always loved Flea’s crazy energy and aggression and Pino’s beautiful groove and melodies that sing. There are also the many many other amazing legends – Bootsy, James Jameson, Jaco- whom I named my youngest son after- and Robert Trujillo is an awesome bassist and person as well as a great friend and inspiration.

If you could put together a dream-team of musicians to form a band with, who would they be?
– Jack White and Dave Grohl. A trio!

Walk us through a typical day ”in the life of”.
– Well that depends on if it’s off time, or your life. Off time, wake up bright and early in the morning and help my wife get the kiddos ready for school. Drop them off safe and sound, head STRAIGHT away for coffee (very important). Head over to do any sessions that I have to do, writing or playing, or both. Finish up, and back to family time! Tour life… Travel, play, travel, play, travel, play, sleep, play, FaceTime with the family, play, play, you get the picture, haha!