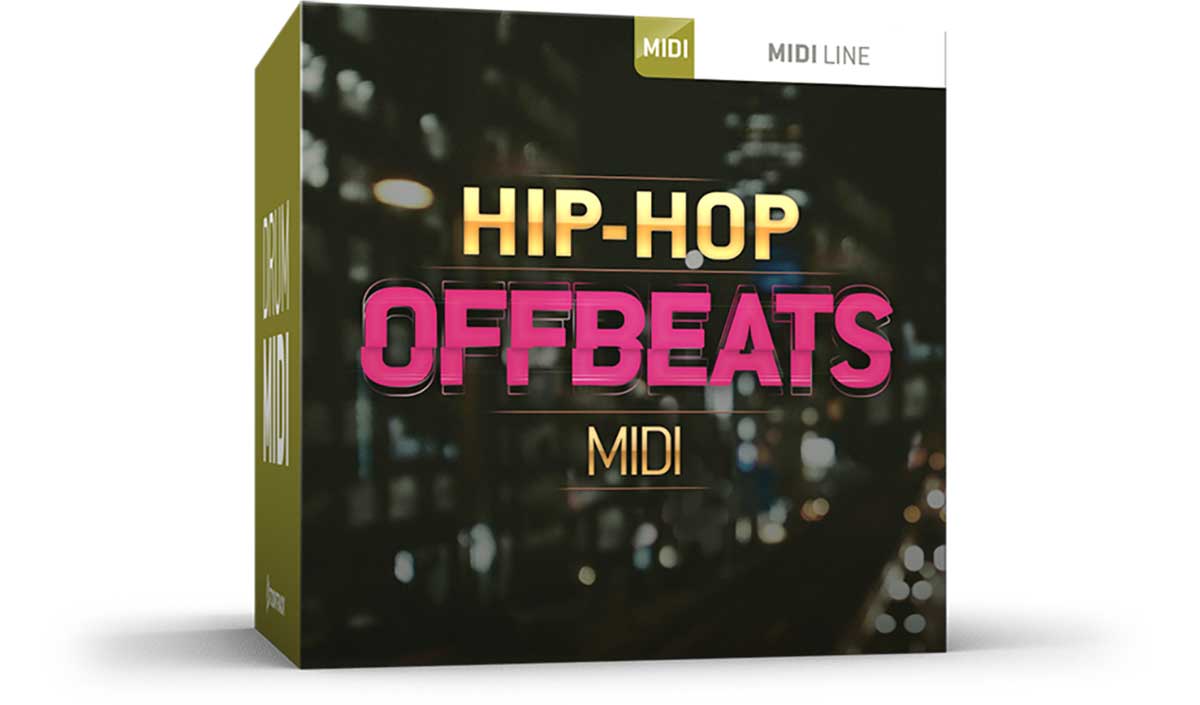 OFF THE BEATEN TRACK.

A collection of hip-hop drum MIDI variations that are off for all the right reasons.

When it comes to timing, there’s no right or wrong. Some rush the beat, others stay behind it – a few, like Hampus Sjöstedt, venture off into completely new rhythmic landscapes. “For me, I’ve realized that real groove is when I let go of all inhibitions, lose myself in the beat and just let music be music,” he commented.

This collection of drum MIDI captures the unique rhythmic philosophy and groove DNA of Swedish drummer Hampus Sjöstedt. It covers a wide range of hip-hop styles and feels – all embodied by Hampus’ unique rhythmic fingerprint. “I want my beats to provoke, to challenge convention and to inspire new takes on flow,” he said.

These grooves will have you venture off the beaten track, into uncharted territory. If you dare to break the mold, paint outside the lines and use some unconventional colors, new patterns will appear. Start writing!

The Hip-Hop! EZX features an extensive collection of sounds tailored for hip-hop – the perfect match to the grooves in the Hip-Hop Offbeats MIDI pack! Looking for piano and keyboard playing variations? The Hip-Hop EZkeys MIDI pack presents a virtual encyclopedia of ideas. Just add some drums and you’ve got a beat.

The Hip-Hop! EZX features an extensive collection of sounds tailored for hip-hop – the perfect match to the grooves in the Hip-Hop Offbeats MIDI pack! Looking for piano and keyboard playing variations? The Hip-Hop EZkeys MIDI pack presents a virtual encyclopedia of ideas. Just add some drums and you’ve got beat.

“Messing up the time can be such a powerful and provoking tool when creating music. It confuses our very nature. There’s something divine about pulse and rhythm.” 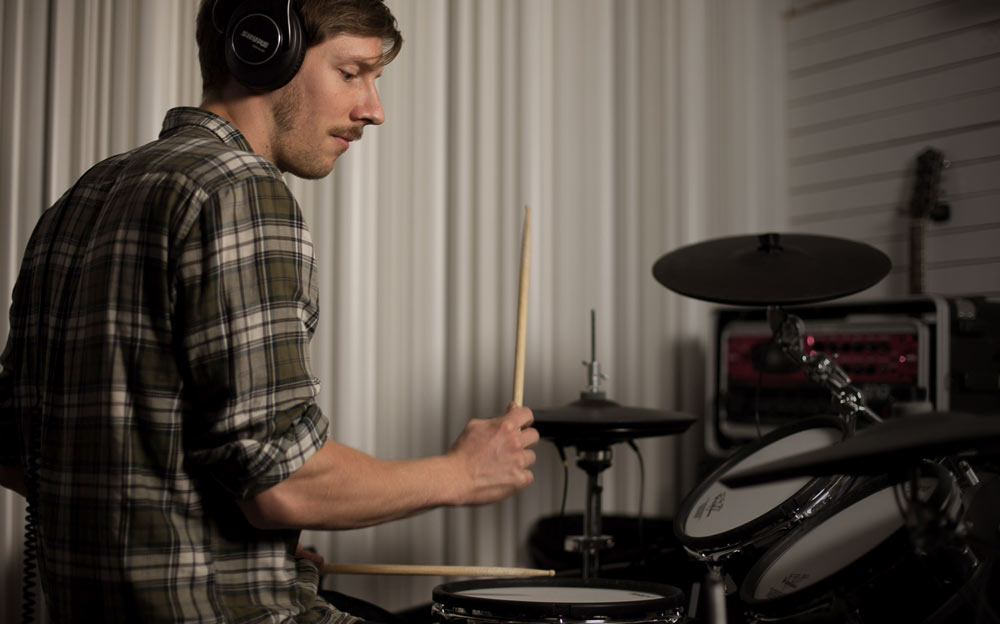 When and how did you realize your passion for music?
My first memory of having obsessive behavior around music is from when I was little, in the car with my dad, driving him nuts by crying about rewinding the cassette so we could listen to ”Black or White” by Michael Jackson again and again and again. Growing up, I spent a lot of time just listening to music in my room, founding some sort of predilection for RnB oriented pop music through the Michael Jackson cassettes my aunt would give me. I was always fascinated by dancing and I used to record MTV Awards performances and such on VHS to watch it again and copy the moves. I eventually started playing the guitar around the age of 13 and pretty quickly followed the urge to start a band. The problem was that nobody in my friends’ circle was playing music, so I taught two of my friends how to play the guitar and bass. We found a younger guy who played the drums, and even though he was not at all into the type of punk rock style we were visualizing, we simply brute forced him into the band and named ourselves ”Egg”.

How come you ended up behind the kit?
So the drummer we took hostage for the band was actually really talented, he was just not (I guess according to me), pulling off the style we aimed for. In fact, I had so much opinion about his way of playing that I just had to go and see if I could get it right myself. I grew up outside of town and the bus connections were a mess, so I had to get a ride with mom or dad when going to school in the morning. That meant, since they started work at 7am, that I had to be in school at about 6.50am every morning. That was way before class started. So in about 7th grade, I would spend those early mornings in the school’s music room, located in the basement, where there was an ’80s Remo drum kit standing around. At that point, having my passion for drums sparked by punk drummer Travis Barker, I was literally beating the crap out of those poor school drums, breaking heads and coming all sweaty to class. One morning, as I was sitting caught up in my loud drum trance, all of a sudden the door had opened and in the doorway stood this teacher looking at me with a dark stare. ”This is a school, we can’t have this kind of disturbance here, what do you think you are doing?” I’d point out that there were no classes that early in the morning, so I couldn’t see why there would be a problem. I can’t recall getting any legitimate reason in return, but eventually they started locking the music room in the morning. Luckily I soon after managed to lay my hands on my first own drum kit, and I guess I have the countryside’s lack of public transportation and my parents early shift to thank for my first vital practicing hours.

Starting out, what style did you aspire to play and who were some of your early influences?
When starting out I was all about punk rock and skate punk. I listened to bands like NOFX, Pulley, Transplants, Pennywise and Millencolin. I was hooked to the fast energetic feel to the music with naive lyrics and melodies while still putting it out with a sense of don’t-care-ness. My main inspiration, and probably the reason why I started playing the drums, was Travis Barker of Blink-182. I was fascinated by the way he was actually starting his strokes from behind the shoulder, to hit the drums as hard an loud as possible. I remember him saying in an interview that he chose to tattoo his entire body just in order to never get a regular employment. I found that approach to life very inspiring. He gave full-on energetic drumming with an artistic flow and playfulness, to me it was the way of drumming.

How come you ended up playing hip-hop?
When I was a kid I wanted to be Michael Jordan. The problem was I grew up in the middle of the deep Swedish forest, about as far away from the hoop you could get. Funny enough, it was when watching ”Space Jam” at the movies where I had my first hip-hop eureka moment. The theme song ”Hit ’em High” featuring Busta Rhymes, Coolio, LL Cool J and Method Man totally floored me with it’s dark and mystical groove. There was something about that laid back feel and snappy snare drum that hypnotized me. I went home to write my first, and (this far) last rap bars. I eventually realized NBA was most likely not for me and all of a sudden I found myself studying jazz instead. I then found people with whom I got to play the music associated with that old dream. That’s when we started Fabriken and began working with different artists, founding the collaboration with Random Bastards.

You have a unique philosophy when it comes to rhythm and timing. Please explain!
Messing up the time can be such a powerful and provoking tool when creating music. It confuses our very nature. There’s something divine about pulse and rhythm. When looking upon the way nature is constituted we see regular, rhythmical patterns everywhere. From the rhythmical notes of a bird’s twitter to the structure of a molecule. I think this is why a steady pulse is so enchanting to us humans, because it’s in us too. When deliberately stepping aside of this concept of regular patterns, it almost seems like a glitch in reality. Your mind goes ”what, wait a minute, I’m not used to this, what is this alternate universe we’re entering now?”. Norms of society and mainstream music seem to have imprinted us with some sort of silent agreement that any drum beat, lets say a snare drum, is always supposed to be located exactly on the pulse beat or within a reasonable subdivision. I believe that’s why nudging the snare just a few milliseconds can move so much within so many people. Just like anything that throws you out of regularity can be stressful, I believe irregular and unique timing can be as well. It stresses and provokes you on a subtle level, but in a positive and sometimes perspective-changing way.

Hip-hop is a genre where machines and samples often are predominant. Is hip-hop played by live musicians something that is making a resurgence?
It seems as though people’s fascination for live hip-hop bands never fades. I mean, classical DJ/MC setup in all its glory, and computer/machine based production for that sake, but there’s nothing like the spontaneous vibes you get from a live band with real humans and beating hearts, wether it’s live or in the studio. I guess it’s obvious how The Roots set the standard for live hip-hop in the ’90s, and nowadays pretty much all major hip-hop artists use live musicians. The way James Blake has been mixing his heavy electronic sound with live human interacted timing is really cool. Many younger jazz oriented drummers seem to have a natural inclination towards trying out odd hip-hop feels and do it live. Chris Dave is probably a big influence for many people in this scene, as he has been for me.

What do you hope users will take away from this collection of grooves and fills?
I’m simply hoping to spark new ideas within people. I want my vibes to branch out. The grooves I have provided for this MIDI pack will be of great use for beat-making and songwriting just as they are. I’m really excited to see what people will make of them. But if my grooves can inspire others to deeper explore their own flow and style of timing, I would consider my mission accomplished.

The Internet “Ego Death“ (2015)
This album has a ton of vibe and hazy grooves. All figures of the OFWKTA-crew have contributed massively to the development of weird beats over the last few years.

Broke n’ Tipsy “Mixtape One” (2013)
These guys are simply ridiculous.

José González “In Our Nature” (2007)
I think José González is probably the most genuine artist I’ve come across.

The Roots “Undun” (2011)
My favorite by The Roots. Great album, legendary drumming.

Thee Oh Sees “Carrion Crawler / The Dream” (2011)
Simply a brutal album, smashes you right back down to earth.

LISTEN TO “SNEAKY RATS”
BY FABRIKEN.