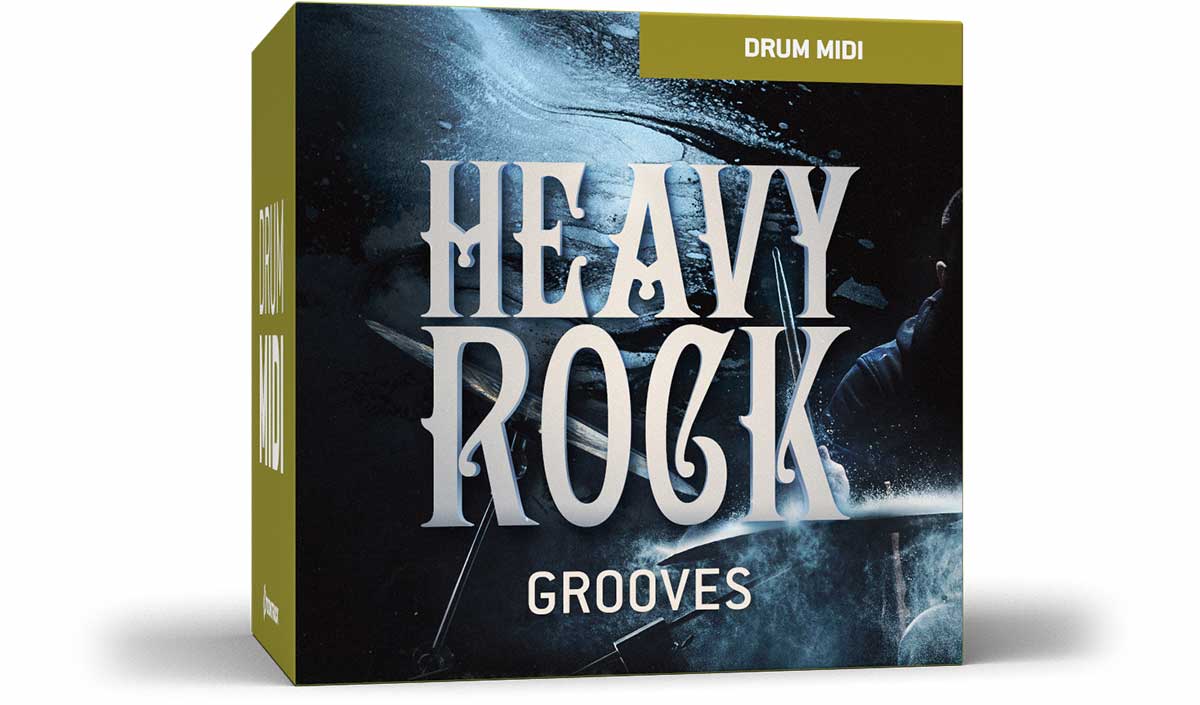 REVVED UP FOR HEAVINESS.

Sometimes, you have a riff and all you need is a thick, in-your-face rock groove without any extras or added frills to go with it. What do you do? Other times, you’re out of ideas and all you crave for is a thunderous beat that makes your speakers rattle and your creative juices flowing. What do you do? This collection of MIDI holds the answer.

Designed to be a sounding board of ideas for songwriters, this collection puts versatility front and center. Each of the more than thirty songs included features five groove variations and ten different fills, all played with increasing intensity and complexity. This will give you a tremendous palette of foundational grooves inspired by loud and heavy drum-driven rock from the seventies and on.

Time to make some thunderous rock! 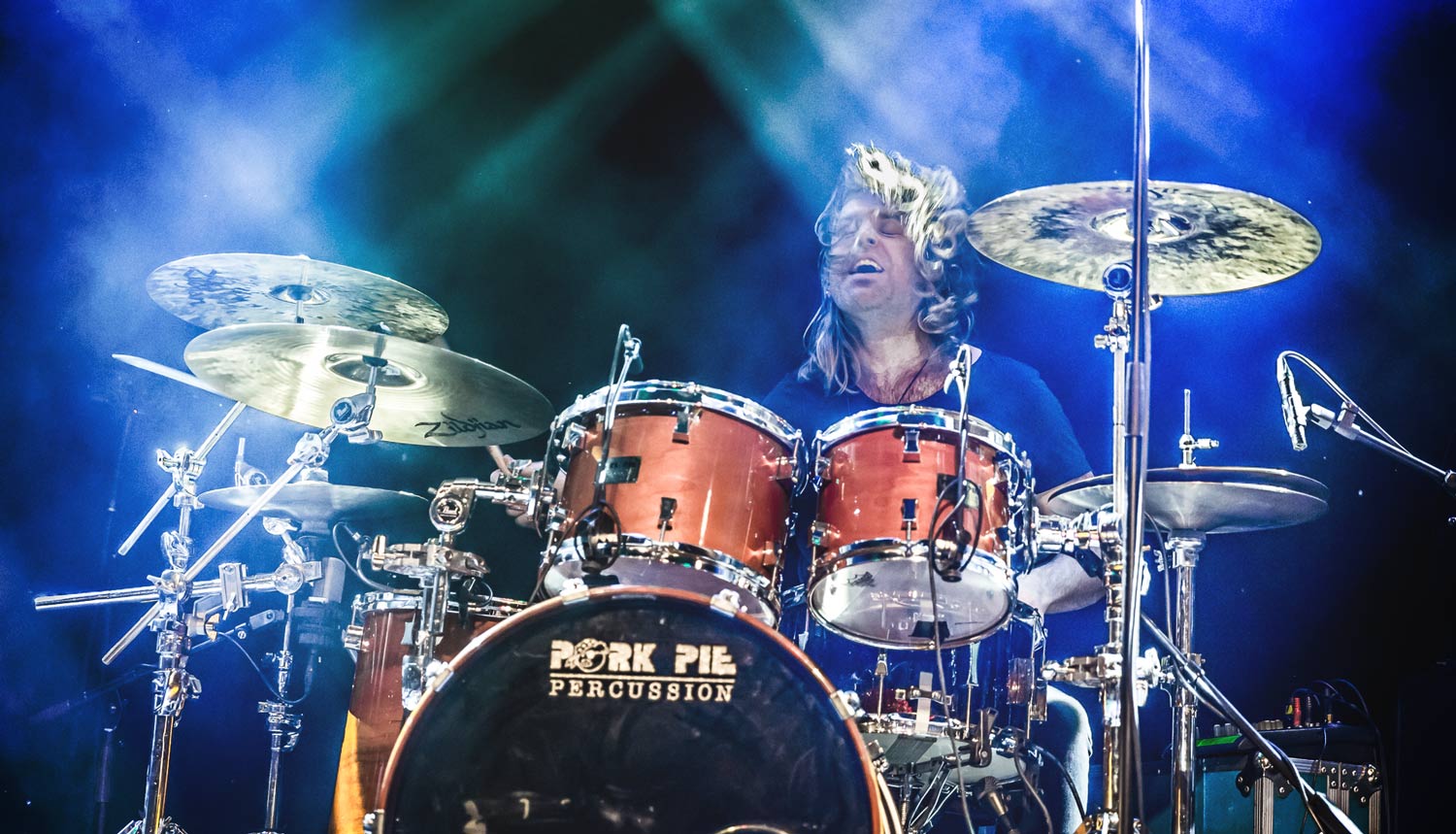 First of all, what sparked your interest in music?
I was always surrounded by music as long as I can remember. My dad was a bass player and coming from America he had a huge love of English rock bands (and we all know the UK bands were the best back in the day!), so I was always exposed to the vinyl he would play.

How come you ended up behind a drum kit? Were you always drawn to drums and was it your first and only alternative?
I never really looked at drums and thought that I really wanted to be a drummer. At the age of six I came home from school with a letter saying I could choose to play violin or tuba. I wanted to play violin, but my dad said he had a better idea. A week later I had a pair of drumsticks and a practice pad and I was hooked!

To you, what defines a great drummer? Name a few that you think stand out in today’s scene (regardless of genre) and some that helped shape you as a drummer growing up and learning the instrument.
That’s a difficult question and I am sure everyone has a differing opinion of the qualities of a great player of any instrument. For me it would have to be a musician who is well versed in multiple styles and genres. Not just someone that is good at one particular thing. I would say my playing style is a the result of five main drummers I loved growing up as a kid: Gregg Bissonette, Dennis Chambers, Dave Weckl, Simon Phillips and Alex Van Halen. I stole so many ideas off all of these guys. In recent years I would say that I’m really into Virgil Donati and Vinnie Colaiuta. These are the two guys that are at the top of their game and I find hugely inspiring as players. To me they are among the best out there.

You’re a professional drummer by occupation and have jumped between bands and projects your entire career. Looking back on this journey, any stints or projects that particularly stand out?
I have enjoyed working with virtually every project I have done. I find it extremely fulfilling to be able to work in different situations. In terms of one-off performances I have done with artists I would say playing “The Power of Love” with Huey Lewis and also the entirety of “Whole Lotta love” and “Rock And Roll” with Robert Plant were well up there on the top of my list! My time in The Darkness was definitely up there. I am currently touring with Martin Barre, the guitarist from Jethro Tull, playing his 50 Years of Jethro Tull tour. This has been an amazing experience playing some iconic prog songs that inspired so many of the modern prog bands. I’m fortunate that this gig has been taking me around the world and we look like being busy for at least the next two years. We also have Clive Bunker, the original drummer from Tull in the band, so it’s a ton of fun to play double drums with him. I also play with Swedish guitar legend Kee Marcello. I played on his last album “Scaling Up” which I think is a fantastic record. It’s kinda surreal that as a kid I used to play along to Europe albums and now I’m Kee’s first-call drummer!

Having played blues, rock, hard rock, funk and, well, literally any style of drums there is – is there any genre/style you particularly prefer?
For me, I am a rock drummer at heart and that will never die, but I learned at a young age that it’s not a good idea to ignore other genres hence why my CV is so varied! I also love my jazz and fusion. It’s a genre that allows me to play to my full ability and fulfill my need to play millions of notes without getting fired!

If you weren’t playing for a living, what would you do for a career, you think?
I’ve always thought I’d be a fireman. Always thought that was a cool job!

What drum kit do you normally use for live shows and the studio?
I have played Pork Pie drums for over 20 years now. They are a custom company out of Los Angeles and Bill Detamore, the owner. makes some absolutely amazing drums. I have several kits from Pork Pie in different configurations and different woods. I can get pretty much any sound for any recording or performance. I also have a huge love of vintage Ludwigs! I own two vintage Ludwig kits and a bunch of vintage Ludwig snares. My pride and joy is my ’76 Vistalite which sounds amazing. Sometimes I use the vintage stuff in the studio for albums. I am a firm believer vintage gear should be played and not collect dust!

What Toontrack products do you use and what role do they play in your creative process?
Superior Drummer 3. I mostly use it to layer in samples on records I do from my studio. I get great raw sounds in my studio, but having the ability to mix in the best-sounding drums recorded in the best possible environment with the best gear really takes my recordings to the next level. There are also times after tracking that the direction of a song changes and you realize that maybe the snare you recorded is no longer the right choice. Superior Drummer’s “Tracker” feature allows me to resolve that issue and choose the correct drum from the huge selection of drums Toontrack has. It’s also saved my behind when I have done a great take only to realize that 30 seconds into the take, the mic cable is failing and making a horrible noise. Simply replace the kick and move on! If I’m stuck on a tour bus I will often program up ideas in Superior Drummer 3 of things I wanna try when I am back in the studio.

What did you try to cover in this MIDI pack and what was your overall aim?
My goal with the Heavy Rock Grooves MIDI pack was to pull inspiration from some classic rock tunes that I love. Even though I had specific and iconic drum grooves in mind, I didn’t just copy them. I used them as a basis to create similar but interesting and varied patterns.There’s a ton of attitude in the playing of these grooves and I’m really pleased with the way this pack has turned out. I’m confident there are great grooves which will bring your heavy rock tunes to life.

Double-pedal or double bass drums?
Always double. You can hit every drum with two hands, so why not hit the kick with two feet!

Click track or no click track in your headphones live?
I can go either way. It can be fun to have no click and just see how the show feels. My timing is good, so I am perfectly comfortable however in this day and age where we have to trigger loops and samples or be playing in sync with video and lights being able to play to click is an absolute necessity.

You can only keep one cymbal on your kit – which one?
I have a 20” Zildjian A Custom Medium. It works on so many things and when I lay into it, the sound it produces is killer!

Club gig or festival – what do you prefer?
I just love playing, so both! I guess the best thing about festivals is that I often get to play alongside bands I have been a huge fan of. It never gets boring seeing your fave bands play and sometimes becoming friends with them.

Thats an eclectic mix. I’m sure we would make an awesome/strange album!

A heavy rock groove isn’t complete without a thunderous drum sound. Superior Drummer or EZdrummer user – we have the perfect pick for you both!