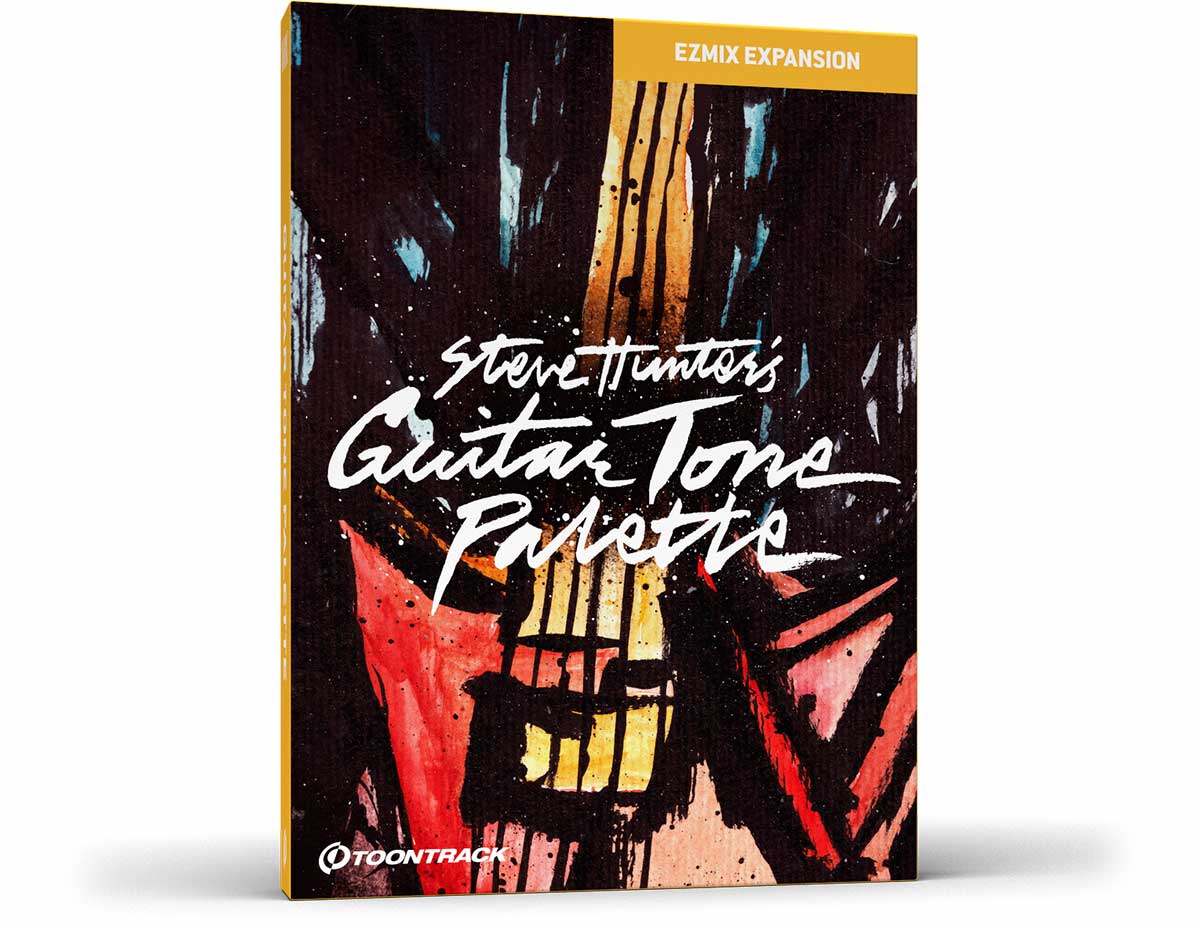 For the past five decades and counting, Steve Hunter’s iconic guitar chops have been tearing up the airwaves through PAs on some of the biggest stages around the world and heard on anything from era-defining records by Alice Cooper and Lou Reed to the soundtrack of Bette Midler’s “The Rose.” If there ever was a literal definition needed for what a broad guitar player is, Steve Hunter’s name should be in the headline.

Calling this EZmix pack a palette couldn’t be more fitting – it’s a virtual color swatch of essential guitar tones needed in any session scenario. Expect anything from the gritty, gnarly and growling go-to settings for rock rhythms to ambient and ethereal cleans, tones for soaring leads and the out-there effects you need for your spur-of-the-moment whims. Best of all, a lifetime-on-the-job worth of knowledge went into creating each and every setting, so as opposed to dialing in tones, you can safely lean back and focus all your energy on coming up with the big riffs, the great arrangements and the out-of-the-box ideas, knowing that Steve’s got your back sound-wise.

Get your guitar out. There are riffs to be written and songs to be made!

How did it all start for you? When and how did your musical journey begin?
I started taking lessons on lap steel when I was eight years old. My father played a little bit and I liked the way it sounded. So when he asked me if I wanted to take lessons I said yes. I think we went to lessons together for a while. It was fun, I enjoyed it. I did it for about four years. And then I went to what’s called regular guitar, which is when I discovered Chet Atkins, I was about 12 years old.

On the topic of Chet Atkins: In an interview with Rolling Stone, you mentioned that one of the first guitarists, who amazed you was Chet. Who is the latest guitarist who has amazed you in recent years?
Well, there’s only one that comes to mind that always amazes me, and that’s Jeff Beck. I’ve been a fan of his since the Yardbyrds and from his first solo album “Blow by Blow.” He is a genius and his playing has just gotten consistently better over the years. He is my most current favorite.

“A great guitar player is a great listener.”

What’s the most important trait for a guitarist? What makes a great guitar player?
A great guitar player is a great listener. Someone who knows how to listen to music in such a way that things like melody, rhythm and stuff like that get absorbed into your system. And then it comes out of your fingers. But for me, the most important thing is being able to listen. And then when you get in a band, you have to be able to listen to the other musicians.

Steve on stage with Alice Cooper

Your first bigger gig was with Mitch Ryder and his band Detroit. During the making of the record, you met Bob Ezrin. This ended up being a life changing relationship that would lead to the next steps of your career. Tell us more?
Well, I mean, I could be here for a couple of days telling you more. There was a lot of stuff that happened after that. But just basically Bob and I got along so well – I liked him, I liked his work, I liked how he produced and he liked my playing. And we just happen to hit it off.

So much so that just about every time he got a project, he called me to play guitar, which was wonderful for me because it helped me learn my craft working with him – mainly because he’s a genius, you know. So that was basically how I got involved in a lot of the projects like Lou Reed, Peter Gabriel and Alice Cooper. You know, I did a lot of stuff with Alice and Peter Gabriel’s first solo album and Lou’s “Berlin” album which led to the “Rock ’n’ Roll Animal” album and “Lou Reed Live.” All those things were projects with Bob Ezrin. He was a big influence on me as a musician. That’s why I love doing sessions – every time you go in there, it’s a different day and you learn new stuff. And I learned the majority of things I know now about recording, playing and sessions while working with Bob.

Recording and touring with Lou Reed, Alice Cooper and Peter Gabriel, traveling the world and playing the big stages… Looking back on your career, what would you say are some of your personal standout moments?
Well, one of them is with Alice in 1975, when we played a sold out Madison Square Garden. That was probably one of the most phenomenal things I ever experienced. Just walking out on stage and seeing it before the lights went out: a completely packed Madison Square Garden. That’s quite an experience. I friggin loved it. The second one I can think of, is when I was touring with Tracy Chapman. We flew to Italy and did a live concert on television with Pavarotti. The most beautiful experience I’ve ever had on stage was standing in front of an 80-piece orchestra with Pavarotti coming through my floor monitor along with Tracy Chapman. It was the most gorgeous, beautiful experience I can ever remember on stage. So those are my two favorites. Another other one was playing the Ryman Auditorium in Nashville, that meant a lot to me because if my father had been alive, I would have been able to tell him that I played where the Grand Ole Opry was held. The Grand Ole Opry was his favorite, and to be able to stand on the same stage as Johnny Cash and Chet Atkins as well as Patsy Cline and Hank Williams among many others, just before they changed it…it was a glorious experience.

You’re coming up on 50 years as an active professional guitar player. Are you still as excited to pick up a guitar now as you were back in the day?
Well, yes, and no. There are times when I feel like just leaving the damn thing in the case, I’ll have to admit that. But that usually doesn’t last very long. Often, it’s just a matter of me trying to get a fresh approach to my playing. And sometimes the best way to do that is to put it in the case and leave it alone for like a week. And then pull it out again. Suddenly these new things come out. It’s really cool. But even at that I’m almost constantly thinking about things for guitar, you know, like, if I’m sitting in a doctor’s office, because of my eyesight I can’t really read the magazines (and probably wouldn’t want to anyway), so I sit there and think about the fretboard. And think about melodies and think about chord structures and stuff like that. That’s what I do when I’m when I don’t have any other distractions. It’s really something I learned from a teacher I had in Los Angeles by the name of Ted Greene. Any guitar players out there need to look him up.

He was a genius instructor and I miss him terribly. He was wonderful. He was the one who said “when you’re just sitting in the car, or you’re sitting in a doctor’s office or something, think about the fretboard.” And that’s what I do. So yeah, there are times when I want to leave it alone, but I still get excited when I’m putting it in my hands….always.

Is there still something on your bucket list that you really, really want to do musically?
Yes, I want to play in front of an 80-piece orchestra. And if I can’t, then as close to that as possible – I would love to play melodic music in front of an orchestra. Because that sound at the Pavarotti show brought me to tears, it was the most beautiful thing I think I’ve ever heard. Hearing an orchestra on record is one thing or hearing it in a video or something like that. But when you’re standing right in front of it, it’s the most glorious sound ever. And I just want to play some really wonderful melodies on guitar in front of an orchestra. That’s what I want to do. So I guess I’ll just have to keep banging away and see if I can get to that at some point.

Finally, for this collection of guitar tones, what was your aim? And what did you cover?
Well, basically, when I decided to do these presets, what I thought would be a good idea is to have something I call a “tone palette.” The reason I call it that is because I wanted to have as many colors and tones as possible. I don’t know about you, but the sound that comes out of my guitar kind of dictates how I’m going to play and it also dictates how I’m going to write. So I wanted to give as many different tones in this pack as I could. When you’re going through the presets, you might hit on one that sets off an idea. I wanted the pack to just start out with some utility guitar, like some good clean sounds and some crunchy sounds. But then the pack goes through some very beautiful ambient sounds as well as others. I’ve already used some of these sounds on projects I’ve been working on. By the way, don’t forget to turn the knobs!