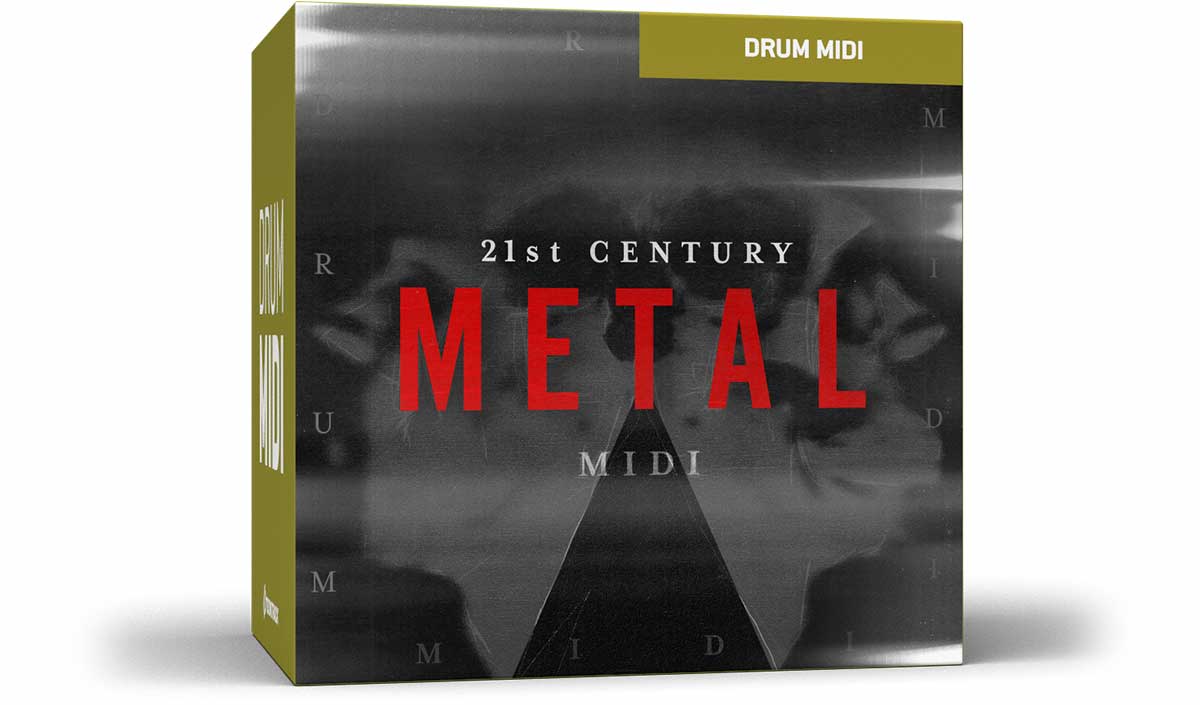 METAL FOR THE MASSES.

Drum MIDI inspired by the last two decades of metal.

In today’s fragmented world of metal, the lines between genres have blurred to a point where often several styles seamlessly meld into one. Any random track can feature anything from a regular four-on-the-floor or a subtle fusion- and jazz-inspired groove to the most relentless d-beats, blasts and grind variations, without the average listener even blinking twice. In this MIDI pack, drummer powerhouse Ash Pearson (Revocation, 3 Inches of Blood) dives headfirst into not only his own impressive discography but also the past two decades of metal music, bands and personal inspirations, to unravel the art of metal drums in the new millennium.

Meant to serve as a broad-stroke collection of inspirational grooves for any walk of metal, this library of MIDI is one where sturdy simplicity collides dead on with technicality, prowess and extreme aggression. In short, Ash delivers one of the most varied drum MIDI packs for metal yet.

When and how was your interest in music sparked? And were drums always the instrument you strived to play?
My dad had a jukebox ever since I was born. My brother and I would push the buttons and listen and dance to the 45s it would play. Bands like Led Zeppelin, The Beach Boys, The Who, Warren Zevon, T-Rex, Elton John, The Beatles, Frank Sinatra, Jackson Brown, James Taylor, Elvis, Billy Joel and many more. So I was always inclined to enjoying music. The real turning point for me was 1998 at age 12. I was in that key demographic of a kid who was easily turned over to the dark side, known as heavy metal. It started with nu-metal bands, then I quickly graduated to heavier and more complex tastes. With that new love for the genre simultaneously came my desire to learn drums. I can’t explain exactly why, but when I got turned onto the music, the drums came with it. I just knew that’s what I wanted to get good at. It’s the only instrument I ever felt that way about.

You are, or have been, in four bands that all are pretty different style-wise: Revocation, 3 Inches of Blood, Ritual Dictates and Zimmers Hole. How does this challenge you as a player?
My musical tastes are pretty varied, so while it’s always a challenge to play what’s right for the music, it’s also a lot of fun to write for bands that are coming from different places. But it all falls into the realm of music for me, regardless of the band or genre.

To you, what defines a great drummer? Name a few that you think stand out in today’s scene (regardless of genre) and some that helped shape you as a drummer growing up and learning the instrument.
A great drummer is someone who is not pretending to be something they are not. Our talents are not only shaped by our skills but also our limitations. It’s good to know what you like, where you shine and be able to flourish in that arena. Without pretending to be some ultra cool douche who puts more emphasis on image than authenticity. Drummers I admire in the modern scene are John Rice, Alex Rudinger, James Stewart, Wojtek Deregowski, Johnny Kerr, Brody Smith, Nick Yacyshyn to name a few. Drummers who helped shape my sensibilities are Gene Hoglan, Dave Witte, Damon Che, Chris Pennie, Joey Jordison, Ryan Vanpoedooryn, Steve Wheeler, David Garibaldi, Neil Peart, Tomas Haake, Nick Barker, Davide Piovesan, Kenny Growhowski, Bobby Sonar to name a few. With each of these drummers, I could trace some sort of lick, beat or style of approaching the drums in my playing.

From what we understand, Superior Drummer 3 is a pretty pivotal part of your creative process. Tell us more about how your bands’ songs come together and how you personally use Toontrack software.
The Toontrack software is great for many reasons. It really helps me audition drum parts I’m writing for the eventual studio recording. Having the ability to change around notes and see how things will sound is a real time saver and cool way to be creative writing drum parts. It’s great for the other band members to be able to get a clear picture of what you’re envisioning for a drum part sonically also. With such high quality sounds at your finger tips it’s been a real game changer for guitarists as well when either writing for a riff or song or if you’re just trying to make an album from the comfort of your own basement (let’s be honest, a large percentage of us musicians dwell and make our music in basements).

Aside from being in bands, you are also teaching and doing a lot of workshops around the world. How did you fall into this?
I love to teach and share drumming knowledge. At some point I got the idea I wanted to try doing clinics. Did my first around 2013. I had been to so many at that point that I knew what I liked and what I wanted to avoid. After doing a few and gaining some confidence, I absolutely loved it. I’ve also been collaborating at Drumeo for seven plus years at this point. The live lessons and online content learning curve for that platform has helped me out as a teacher. Things like how best to present information and concepts while delivering it in your own style.

What drums do you use live and in the studio?
I’ve been with Tama since 2015. I love their Starclassic drum line. The last two Revocation records I’ve used Birch/Bubinga Starclassic drums. Recently I acquired a Tama Birch/Walnut Starclassic kit (Transparent Mocha Fade) which I really enjoy playing. They make great drums.

What is your relation to e-drums in general?
I love my e-kit. I always use it at home. It’s a great practice tool. You can dial in so many different drum sounds and really experiment with things like jazz, latin, dub, funk, metal and more. It has versatility for practice that a big kit nor a small one can encompass. It’s also great for linking up to software like Superior Drummer and using it as a MIDI controller in order to use the killer sounds provided by the program. You can dial in your dream kit and play the sounds using the pads as triggers.

For this collection of grooves, what was your train of thought and what were you looking to cover?
I wanted to include a mixture of grooves ranging from fast to slow and in a handful of different time signatures. Metal over the past two decades has so much variety to be found. This is my attempt at taking a fraction of the different beats and feels from the countless different bands out there and bringing them to you in this MIDI pack. Some grooves were ones I had previously played on Revocation albums. Others, I would sit before tracking and ask myself: “What would Dale Crover, Danny Carey, Gene Hoglan, Lars Ulrich, Neil Peart etc. play for a part this like?” I felt this approach would help encompass different subgenres and eras of metal while still portraying it in my own voice. But in general, I would pick a time signature, tempo and then just come up with fresh ideas. This approach seemed the best way to deliver to you a unique and tailored MIDI pack instead of just me repeating beats I’ve already thought of (though those are great too!)

Finally, what do you hope users take away from using the MIDI grooves you recorded for this pack?
I hope some of these beats will inspire you to come at songwriting from a blank slate or otherwise help you get exposed to a different style of drumming you might not otherwise be accustomed to. I also want these beats to help you come up with some stuff you don’t normally try. That’s often where some of the best material is to be found, when you try something new and take a risk. This MIDI can also be a great tool for learning. Having the ability to take MIDI beats from a killer pack, slow them down, rearrange them, pick them apart and learn them is another huge benefit. It’s a really cool way to challenge yourself by stepping into the mindset of another player and interpreting their material in your own voice. So give it a try. Enjoy!

Dream team band (with you on the drums!):
Oh jeez here we go. Jed Simon and Bill Steer on guitars, my Revocation bandmate Brett Bamberger on bass and if I HAD to pick a singer (they so often make or break a band for me) would be somebody with an annunciated death metal voice. Ben Falgout, Chris Valago or Luc Lemay.

The worst thing that ever happened to you on stage?
I fell off one once when I was 17. It could have been so much worse. I was fine. But when you think of all the gear hanging around the outer edges of every stage, I shudder to think what injuries could have taken place. Be careful folks!