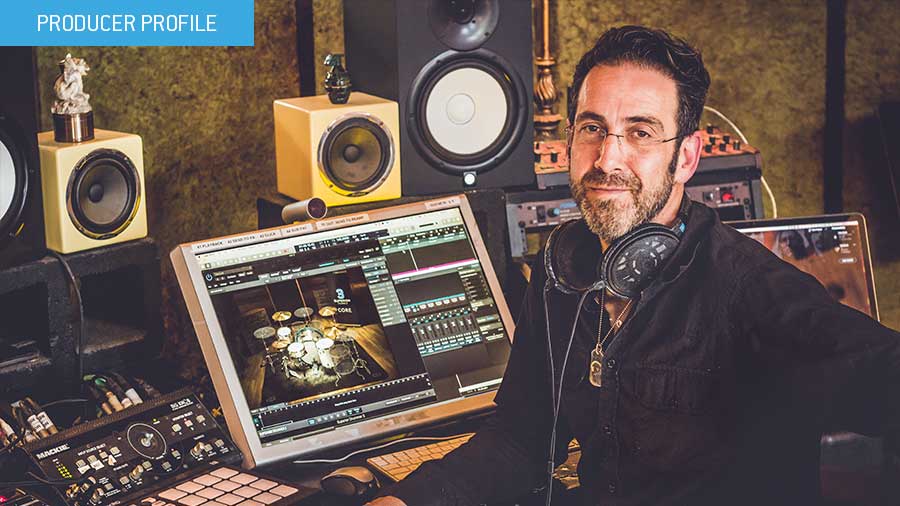 How did you get started in the business and how come you ended up behind the console as opposed to on stage?
I got started in the business remixing heavy bands, one of which was White Zombie, which was a huge kick-start for my career. As far as how I ended up behind the console…truthfully, even when I was an artist I was still a producer, I just didn’t know it. Back in the day I was doing “electronic guitar music” à la Nine Inch Nails; dance/industrial music mixed with hip-hop. I was always most passionate about making my music in a studio and the live factor, while very important, always came second. I have to say though; I think back and I did have some of the most fun times of my life on the road in my twenties.

There are tons of engineers and producers out there doing records with mid-sized bands, but only a handful of go-to, A-level guys producing the bulk of what’s topping the metal scene. You’re definitely one of them. Is there a specific moment or project that helped push you on to the next level?
Well, thanks for the compliment. I’ve been really lucky to be pushed up to other levels in metal and other genres a couple times in my life. It’s really about understanding how music effects life styles emotionally. For me, that moment in metal was when I first worked with Lamb of God. Ironically enough, at the time I landed my first record with them (“Ashes of the Wake”), I was not considered a metal guy. I had done other progressive and heavy records like Clutch and King Crimson, but never a true metal record, like I had never recorded a double kick before Lamb Of God. The band knew at the time they could work with pretty much any metal producer but wanted to be different. They liked the idea of working with me because I wasn’t typical and at the same time was able to give them a perspective on their scene that they trusted. I was just being honest with them as I am for every band. Once in a while honesty makes you lose a record but not with the great ones.

In a mix, where do you usually start: the drums, guitars, vocals or something else?
I start in the mix with the instrument that the given song is driven by. In metal for example, if it is a guitar riff that really sells the song, I will start there, make it marry with the bass guitar tone just right and then build around that, making sure I never lose what is carrying the song. Like the same reason you build the foundation of a house first. Then I would work everything around that picture. If I were mixing a hip-hop track, I would of course mix around the drums. And even sometimes, believe it or not, when I am mixing a track that is very vocal production heavy, I stop with the music at some point, put it all on mute and try to make an acapella mix that I feel can stand up all on its own. Then turn the music back on and make adjustments. But do you see the point I’m making? Keep your eye on the big picture, the things that drive the song.

Is there any instrument you generally struggle with more than any other in a mix?
Sometimes different instruments take more attention to detail than others, but no, I don’t struggle with any instrument. Next Question, haha… But really, I’m better now with experience – but I have struggled a lot in the past with placing vocal levels. It’s really tricky in heavy music because it becomes the battle of the mid range. Guitar, vocals, snare, attack of kick, even bass guitar has a lot of mids in it. As an animal we are tuned to hear mids first (like speech, or the cry of a baby). So what I found to help with the “battle of the mids” is finish my mixes on small speakers at very low volumes. It’s a great trick.

Name a few productions from your catalogue that you feel particularly proud of.
“www.pitchshifter.com” by Pitchshifter was super exciting because it was my second major label record and it was one of those rare moments in the music industry where, when it came out, everybody felt compelled to stop and listen to it, whether they liked it or not. Another one happens to be my last record, “Blue Water Highway”. Not just saying that because it was my last record haha. It’s going to be a big record and coins my ability to go into soulful americana, alt-rock and throw down. Next would have to be “Blast Tyrant” by Clutch because they are a legacy signature rock band that are very drum- and vocal-driven. Jean-Paul Gaster, I truly feel, is the living-day John Bonham, if there could possibly be one. And of course I’m proud of Lamb of God for both records we did together and the experience of working with them. They taught me about metal and I taught them about how to engage more people with their music. Even though I am NOT pro war, it is very emotional to me to know that Lamb of God is the soundtrack for so many of our soldiers in modern day warfare. There are many solders that play Lamb of God while on the battlefield and have used their music to keep them going in battle. That to me is super powerful and I have to acknowledge it.

Also, by the way, just the other day I heard the new Perfect Circle single, “The Doomed”, and I am beyond floored with it.

If you produced an album that you couldn’t mix yourself, who’d be the first name on your list for the gig
Dave Sardy.

Best studio moment ever?
There are so many good studio moments, but I’d have to say that the best moment was pre-production for “Sacrament” with Lamb of God in a small sweaty rehearsal room. Just me, Mark Morton and Randy working on placing lyrics Mark had written. Mark cannot scream, he just doesn’t have that ability, so he kind of whispers what would be a scream. This was also still in the time where Randy swore he would never do anything with pitch for Lamb of God. Everything would be brutal. Mark, by nature, being so musical…whispers, screaming, sings the melody of “Redneck’s” chorus. Randy on autopilot, picks up the mic and sings, “This is a mother fxxxin’ invitation.” At that moment, Mark and I stopped dead in our tracks, we looked at each other, with only body language. We just looked at each other in a smile of amazement and knew instantaneously in that moment that this was the start of a new era for Lamb of God.

Worst studio moment ever?
I was locked out of my studio by the mob on day one of making a record with Dananananaykroyd from Scotland with all of our gear inside and there was nothing we could do. It was like an anxiety dream but it was really happening. There’s actually an old video on youtube about it.

Finally, any tips to those looking to make a career in music production/engineering?
Give as much as you take, or give more then you take, there is power in giving. Also, do yourself a favor and limit yourself with technology choices when you are getting started. It’s better to know few tools very well than to be semi-familiar with a lot of different tools. Just do your homework and pick the right ones, then invest your time in learning them. This is so you can keep your brain on the sound and music.