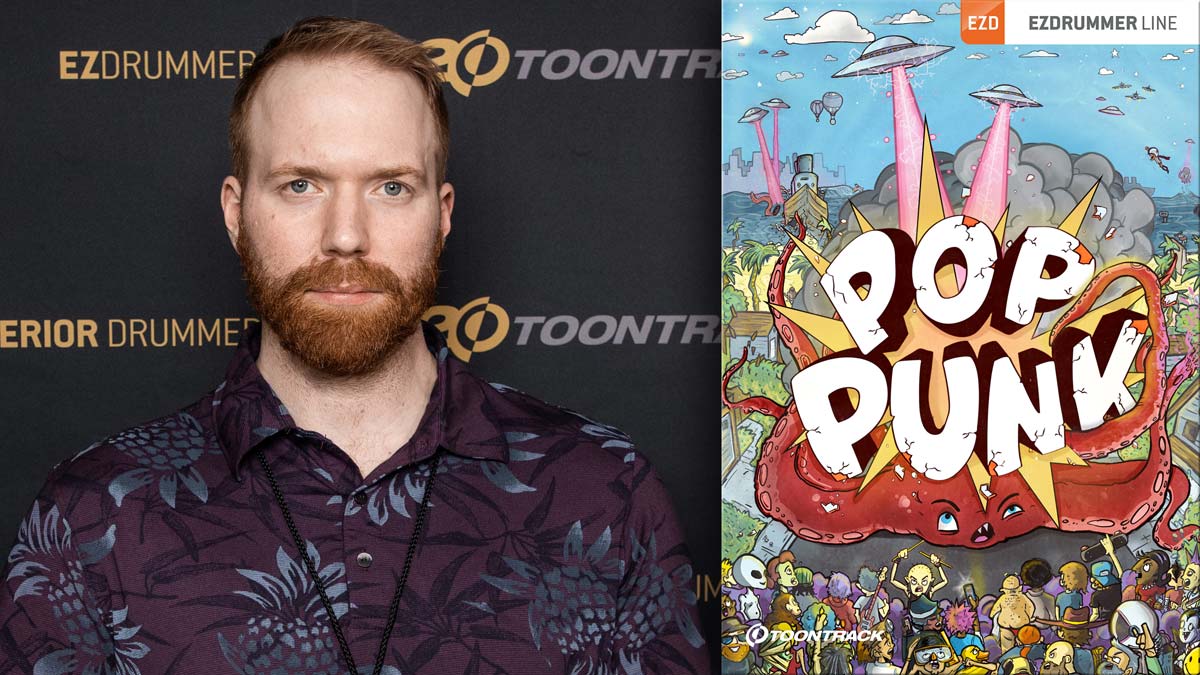 First off, you’re the artist behind the Pop Punk EZX illustration…but your day-to-day gig at Toontrack is handling technical support. How come you ended up illustrating the cover art for this product?
Well, pop punk was one of the first genres to help inspire me to start playing guitar as a teenager, so a pop punk drum library was something I started asking about (and hoping for) early on into my Toontrack career. A few years back I heard Toontrack was finally going to start a pop punk library- with John Feldmann! So, I was super excited to learn that, since he had produced some of my favorite albums by some of my favorite bands. I happened to be visiting the Toontrack HQ in Sweden when I found out, and the next day I immediately bugged the art director about having a shot at doing the art for this product!

So, everyone here at Toontrack knows that you’re a chill dude from Chicago…but the general Toontrack customer of course doesn’t. So, who is Mike Shragal?
Aside from the illustration work I do, I love to create through other mediums, such as sculpture, paint, and I’ve been working on writing/drawing my own story book I want to complete soon! I just love creating things and having fun with it. And, of course, I do enjoy creating my own music when the mood strikes! Being in the Chicagoland area I’m close to a ton of great breweries, restaurants, and other tasty shops, so I like to get out and try new things when I can. At the end of the day, I think a being a pretty chill dude from Chicago sums it up!

If we rewind a few years, how and when did your interest in art and design take shape?
I was pretty artistic from a young age, so I always had a knack for doodling and making cartoony drawings. It wasn’t until about 2012 when I decided to start pushing myself with my art. Until then I hadn’t pursued it as anything more than a boredom hobby, but I knew I wanted to do more with it and take it further. Actually, Instagram played a huge part with inspiring and motivating me, as I would follow dozens of comic book and cartoon illustrators. Having an endless stream of killer artwork to look at really helped with pushing myself to do more with it.

Looking through your portfolio, your style is pretty unique and consistent throughout. Have you ever tried venturing completely outside of your “comfort zone” art-wise?
Every once in awhile I do like to try other styles of illustrating or painting, but it ultimately comes back to this sort of cartoony style that’s been inspired by the Nickelodeon and Cartoon Network shows I loved growing up. I do like that, when I do try something new, I might not love what I end up with, but I definitely take away something new I can use when it comes to my own style and future projects down the line. At the moment I am actually teaching myself how to make rubber molds and resin casts of my own small sculptures. So far, so good!

If you had to name a few sources of inspiration, what would you say they were starting out and now?
My father and grandfather (and a lot of others in my family) were very artistic in many ways, which I think rubbed off on me as a young kid. As I went into middle school I was a big fan of the shows on Nickelodeon and Cartoon Network, so to this day I am still inspired by the drawing styles seen on Angry Beavers, CatDog, Fairly Odd Parents, Spongebob, “Ed, Edd, and Eddy”, Dexter’s Lab, etc.. Todd McFarlane was another huge inspiration through his Spawn comics and toys. Nowadays, I’m inspired by illustrators and street artists such as, Kim Jung Gi, Arthur Adams, Joe Vriens, CLOG, Seth McFarlane, Alex Pardee, SCRIBE…. so many!

How do you usually go about drawing a piece? Do you start with a rough sketch, toss that and draw it again for real…or do you improvise as you go?
I will usually spend some time and just think about the general direction I want to take with the drawing. Essentially it is just a period of brainstorming ideas. After some thought goes into it, I do usually start off with some very rough sketching, with the idea of getting the outlines of shapes and elements in the positions I have already thought up. In that process, a form of improvisation takes over as I start to come up with new and better ideas that work for the pieces as I’m still sketching it out. Once the rough outline is done, I go over it again and refine the drawing for a more finished looking result. Most of the time spent comes to coloring and adding in details, which are my favorite parts of the process. The detail stuff will come later, as I find it’s more important to get the general idea all out before spending too much time getting into the details.

Talking to musicians, we’re usually very curious about their gear and studios. How about yours? With what do you create and where best do you get it done?
I work best from home. Usually at my desk with a good Spotify playlist in the background, or even having “The Office” on in the background. I was never the type to enjoy drawing out at busier settings, like coffee shops or restaurants. I like having my own space when creating so I can focus more. When I start the actual drawing, I will go traditional with pen or pencil in a notebook that I keep near my desk. Once I have some rough ideas down, I will use my iPad Pro to take a snapshot of that image, then insert that image right into Procreate. Procreate is the iPad application I use to complete about 99% of my illustration work. I love that application because it is super user-friendly and overall just really fun to use. When the illustration work is about finished, I often export and airdrop that Procreate file as a Photoshop document to my computer. I like making any necessary fine-tuned adjustments to the drawing in Photoshop at the end, as well as when it comes to adding/adjusting any lettering that’s required. If I know the project is going to print I will make adjustments in Adobe Illustrator, but most of the time I just use iPad Pro, Procreate, and Photoshop!

If we go back to the Pop Punk art, what was the main idea and inspiration behind the illustration?
I definitely wanted to make something that would stand out amongst other Toontrack covers and also be recognizable to anyone generally reviewing the Toontrack EZX line of products. I knew that the illustration style of the live album “The Mark, Tom, and Travis Show” (by Blink 182) was something I wanted to reference. I was and still am a huge fan of the classic Blink 182 stuff, and I loved that live album growing up, as well as the detail of the art on that cover, so I knew for sure that had to be incorporated into the overall look. The whole octopus’s idea comes from a sticker I noticed from a picture of Mark Hoppus’ bass. The UFOs are also something heavily referenced with Blink, but I also added those to reference All Time Low’s “Don’t Panic”. Then, the general layout of “Dookie” (by Greenday) worked itself perfectly in with the crowd element I wanted go for from the “M,T,& T S”, and the rest of this chaotic direction the drawing has while featuring a giant-sized land-octopus!

We heard you sneaked in a few Toontrack faces in the crowd. True or false?
True! You can find Toontrack North America CEO- Rikk Currence, Managing Director- Peter Knutson, and of course, (shamelessly) myself!

Like pretty much everyone at Toontrack, you’re also a musician. What instruments do you play and what gear and instruments do you have at the house?
I’ve downsized my collection of gear over the years, but I still have my trusty LP Custom, an older Sterling 4 string bass, a 1980’s Cortez Acoustic, and my Orange amp. I have a sweet limited-edition anniversary Orange Rockerverb 50 from 2009, so it has a cool white tolex finish. That amp is incredible, but I don’t get to use it as much as I’d like to.

SOME OF MIKE’S ART. 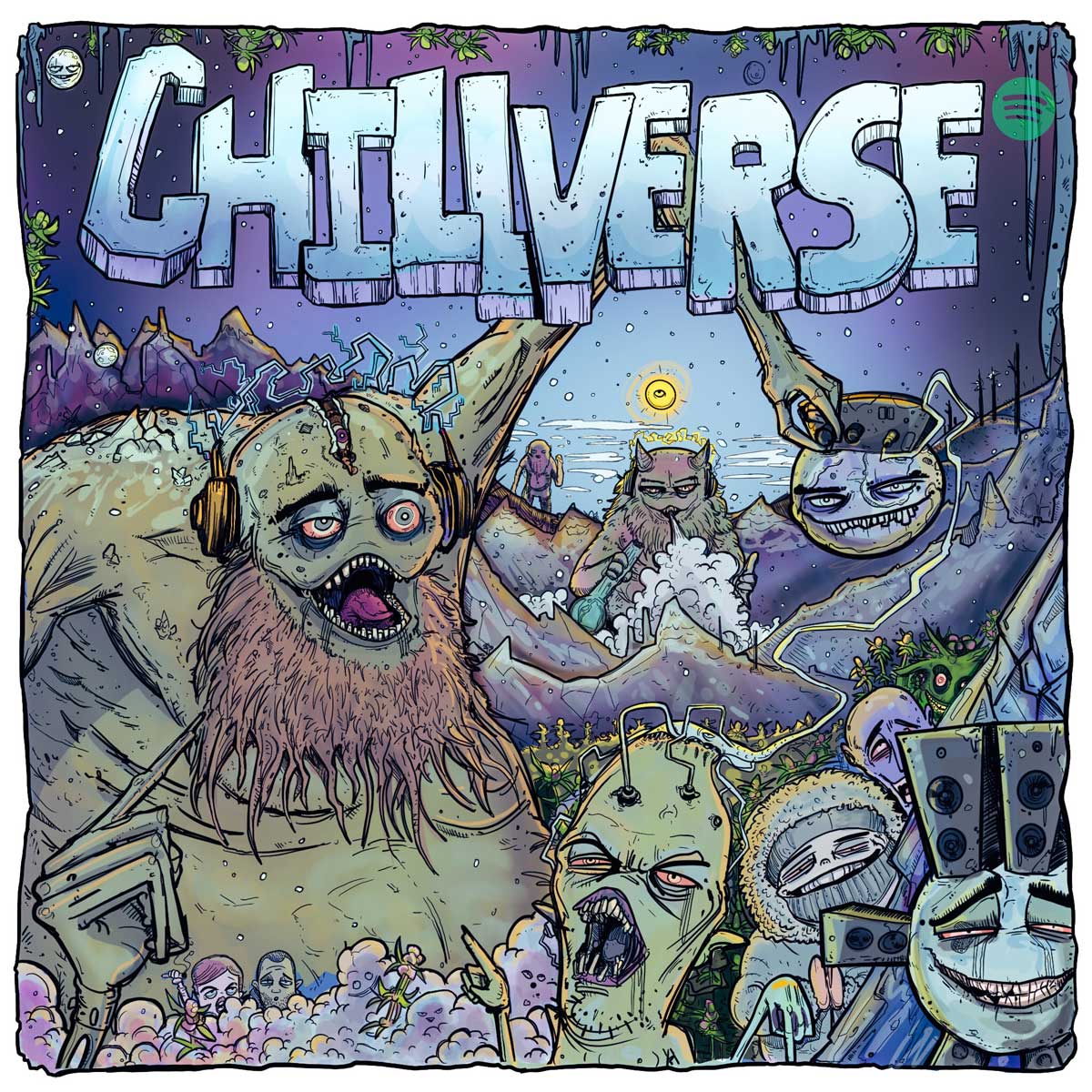 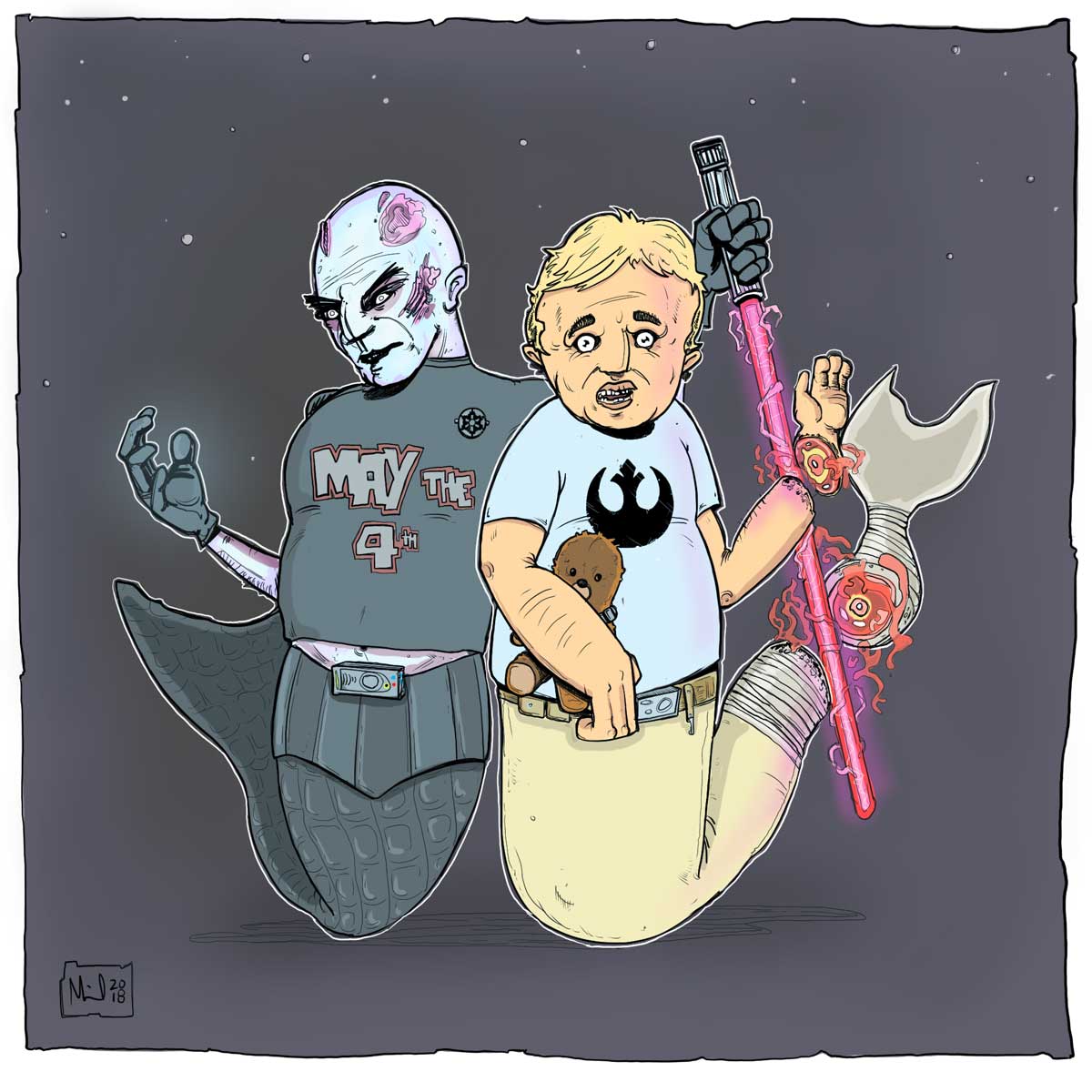 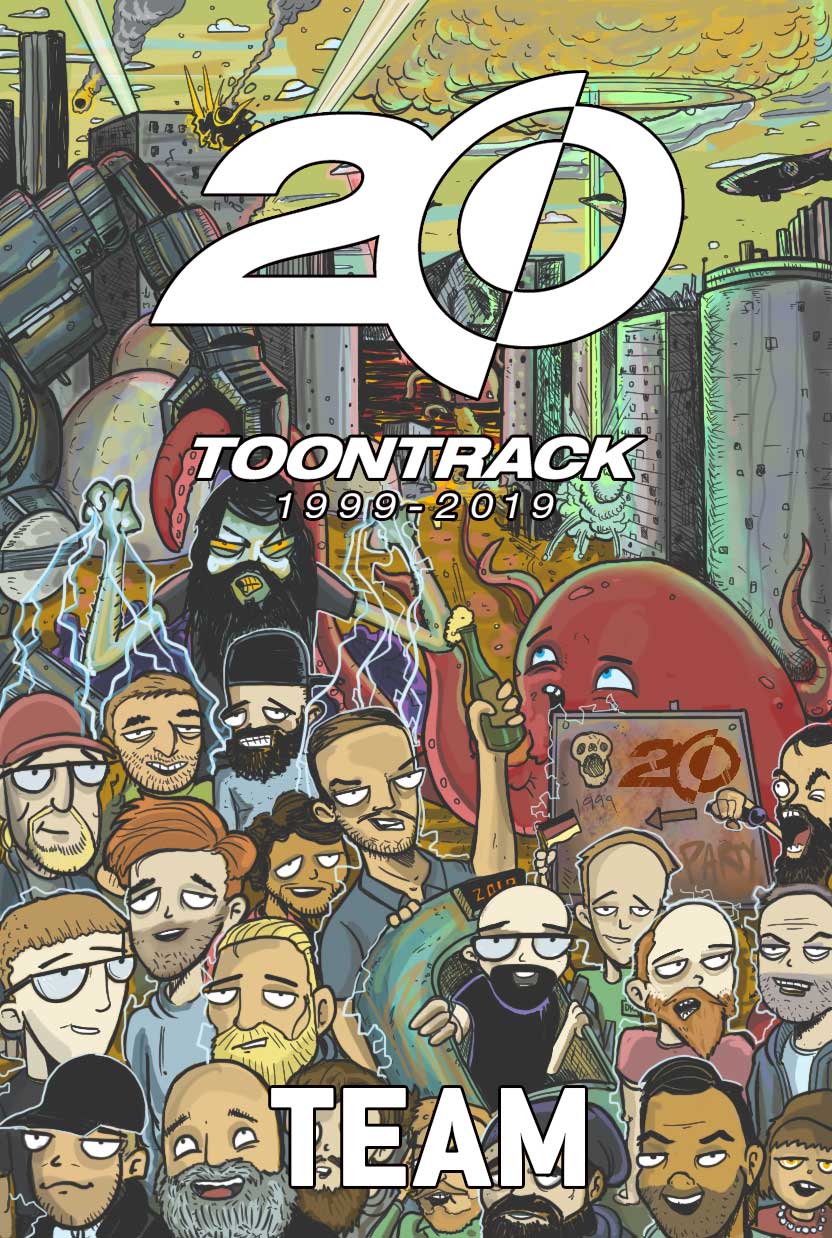 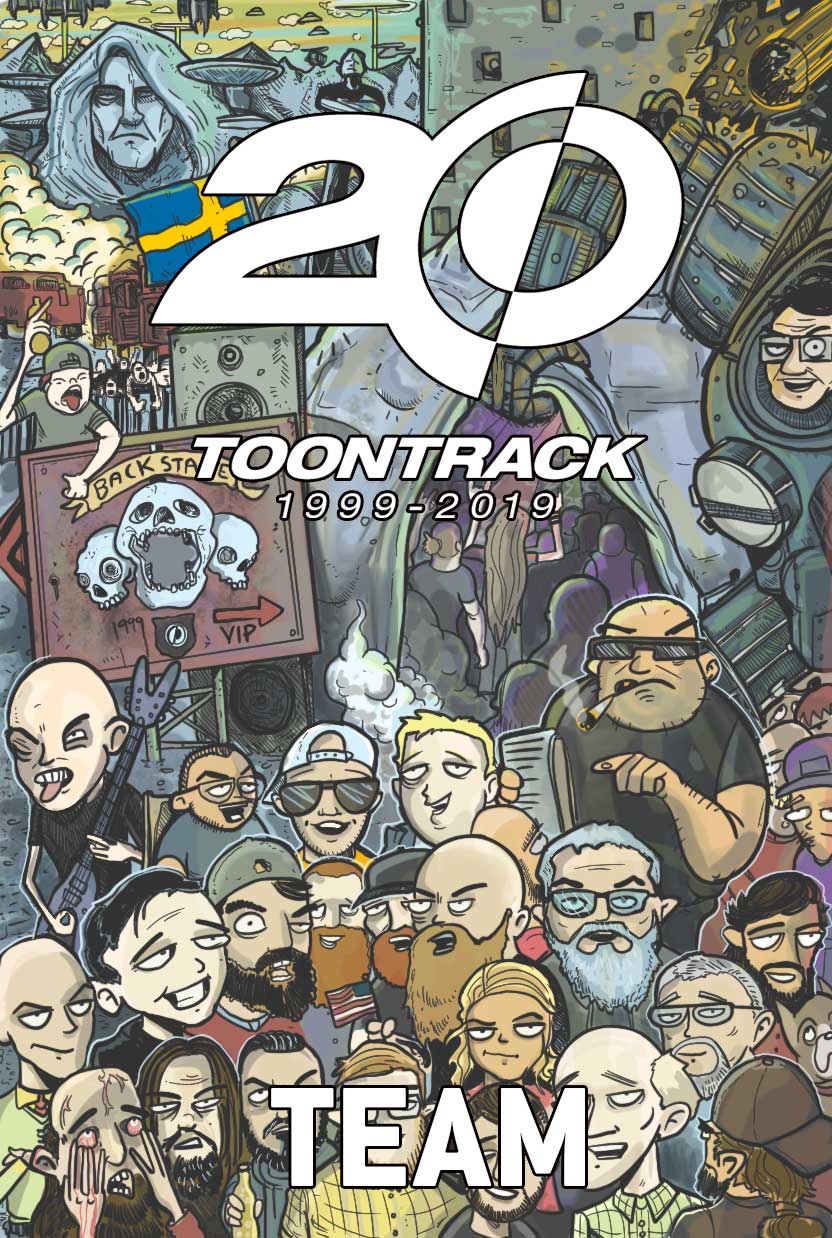 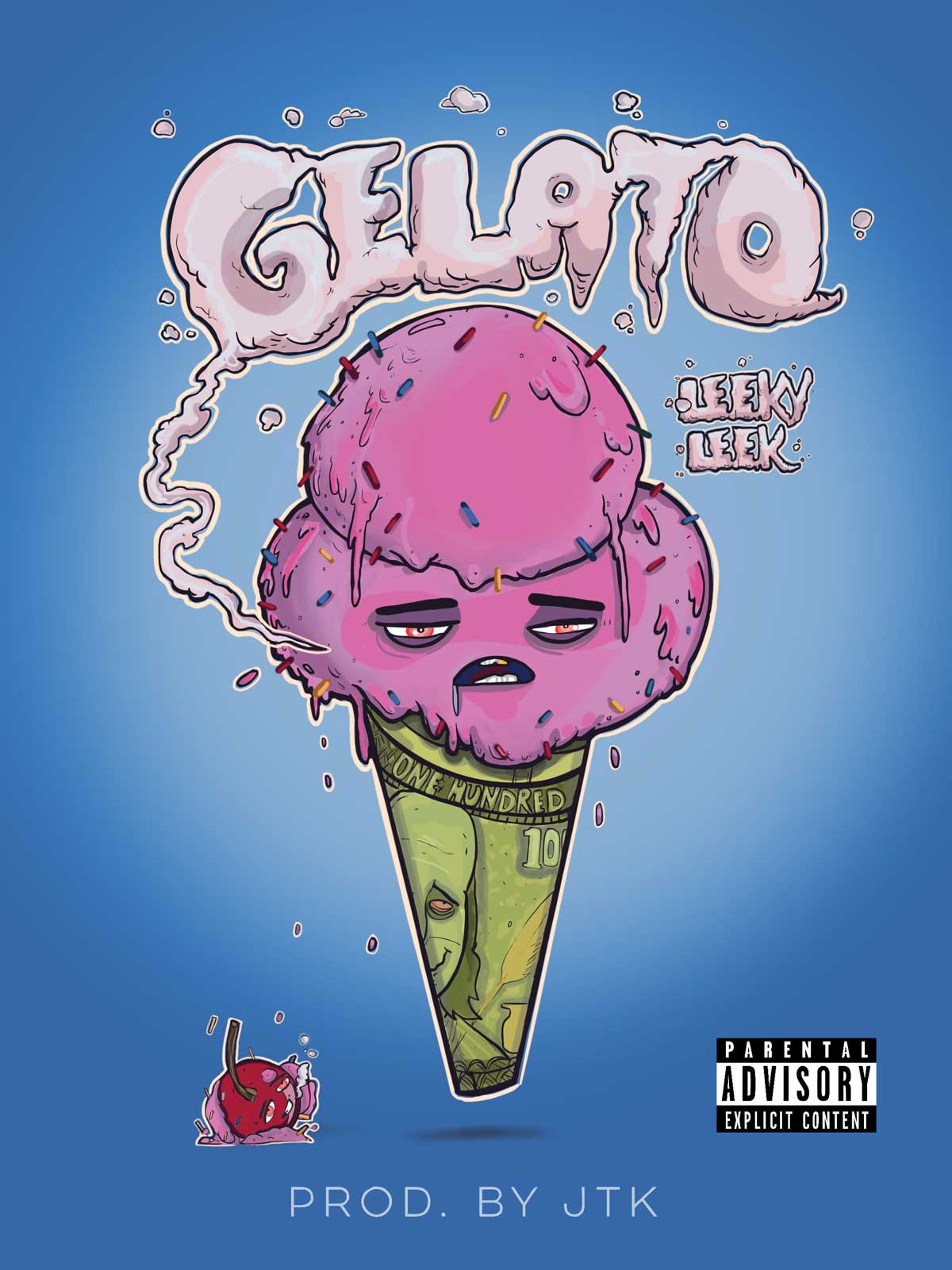 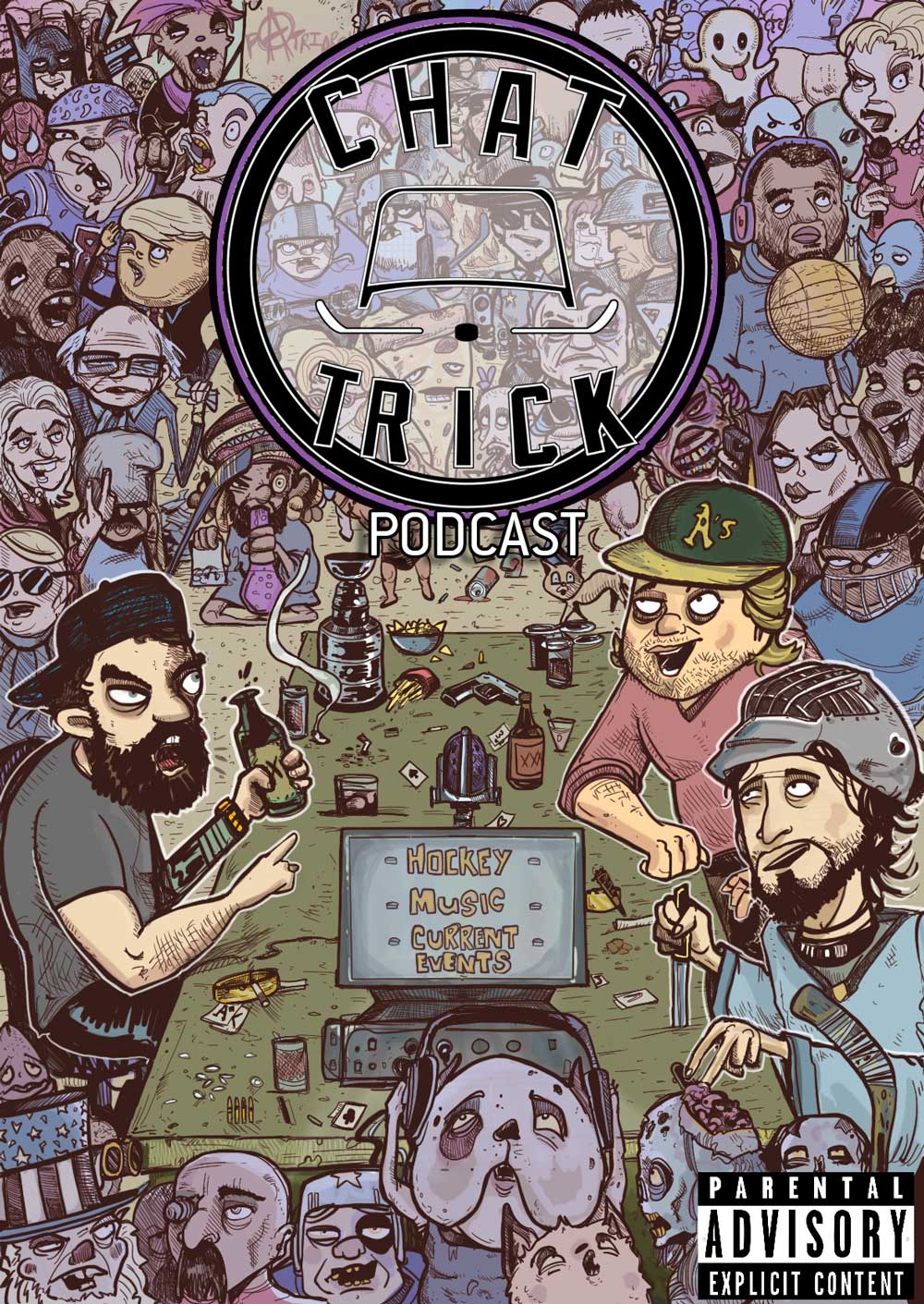 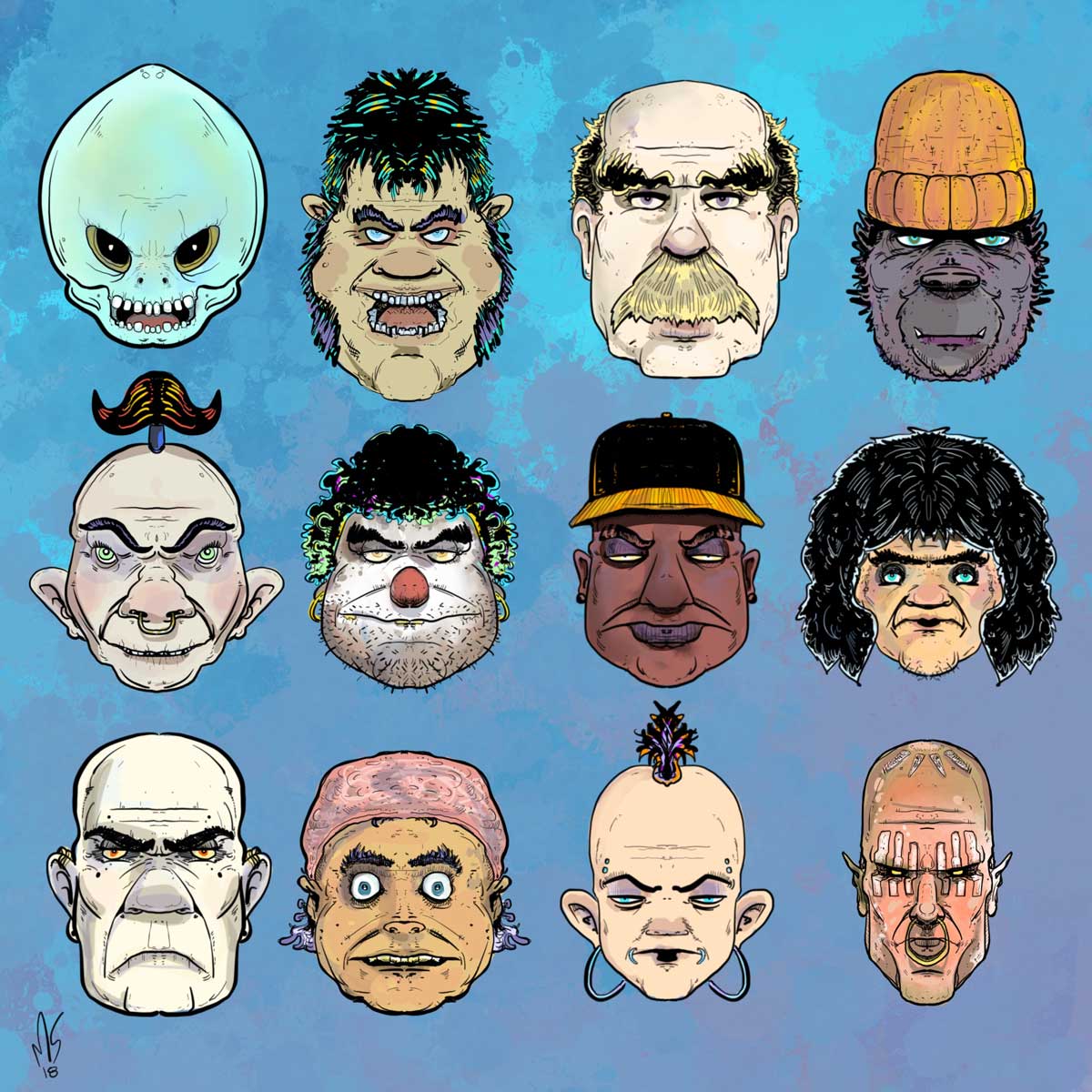 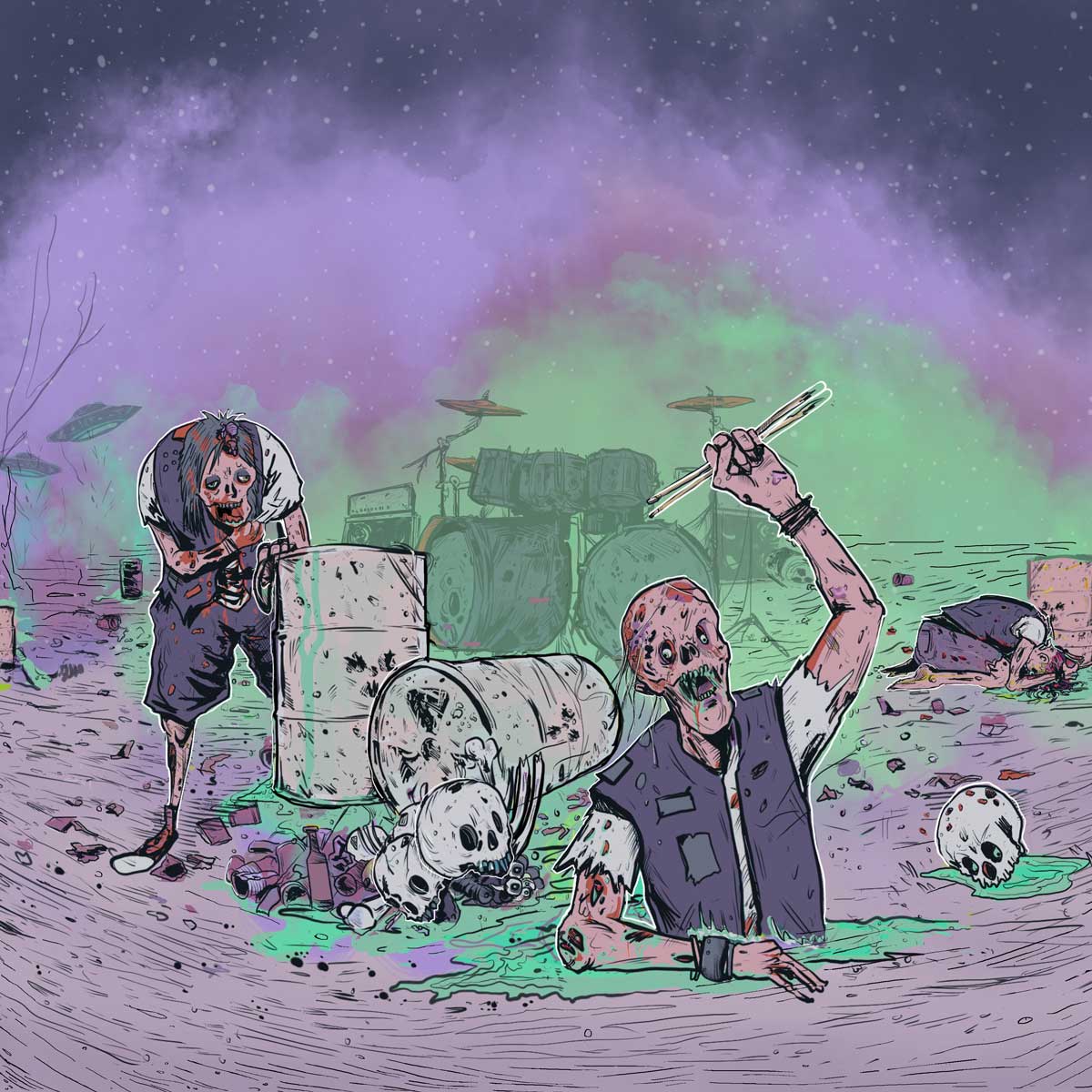 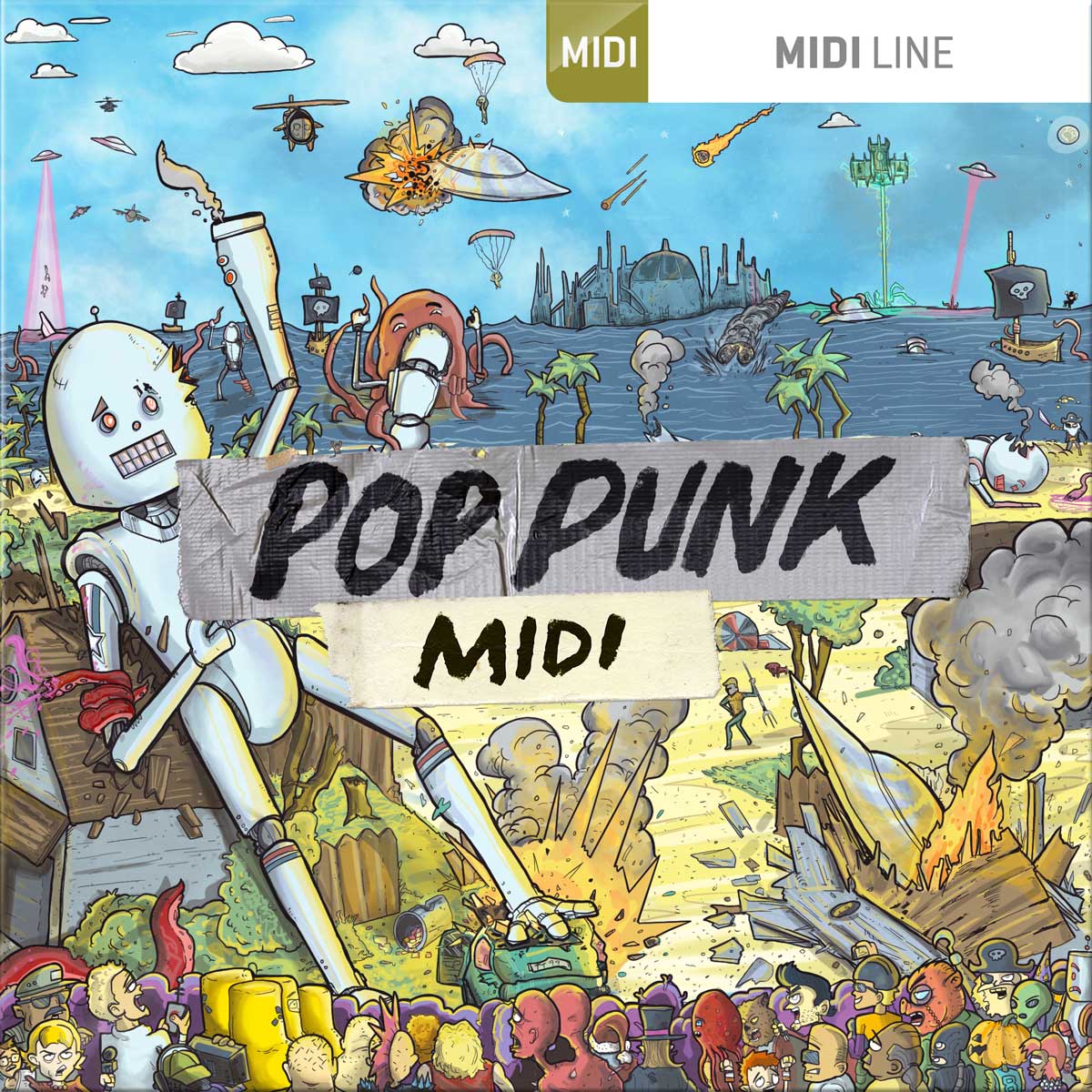 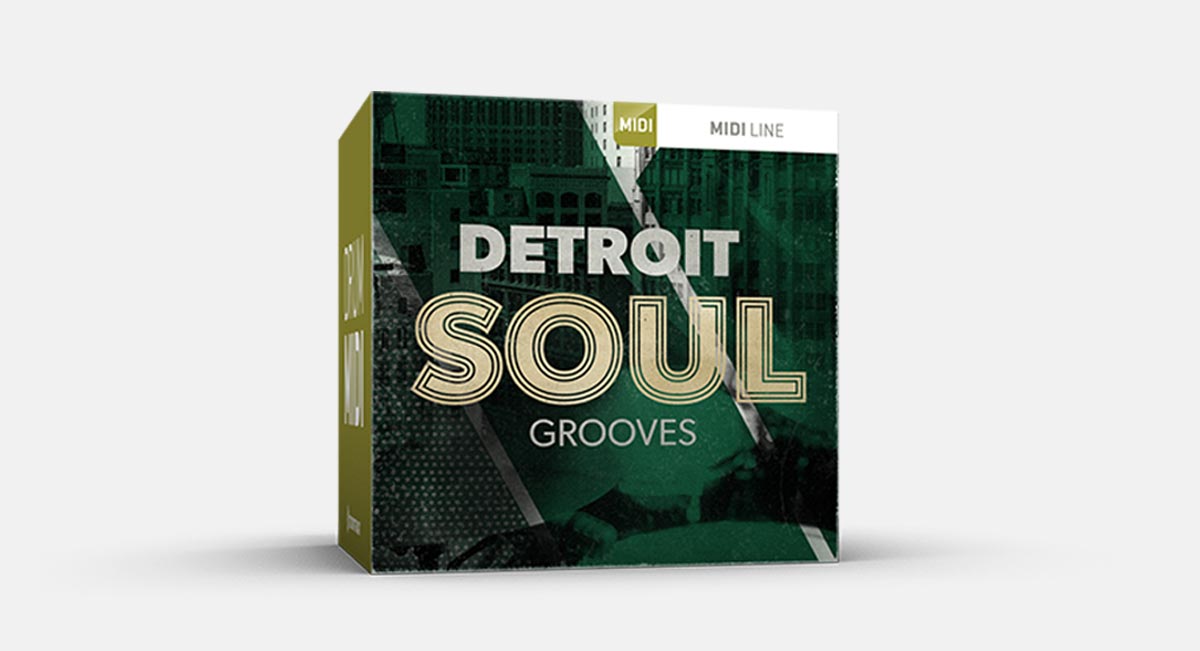 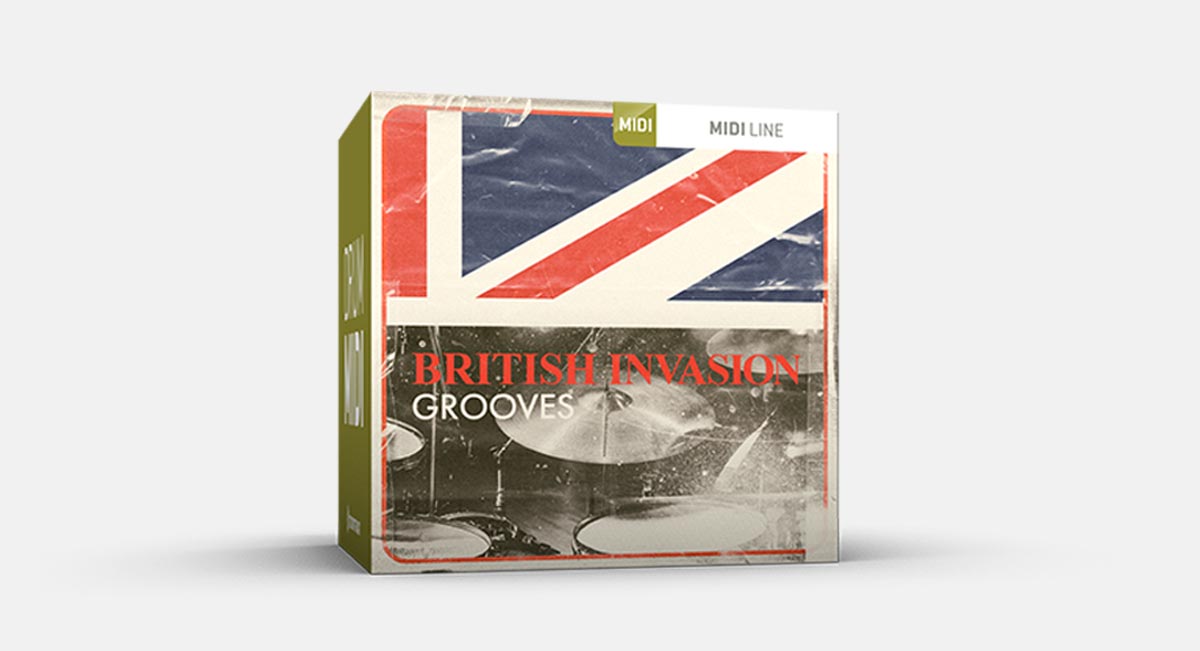 Drum MIDI inspired by the bands and drummers of the ‘British Invasion’ era. 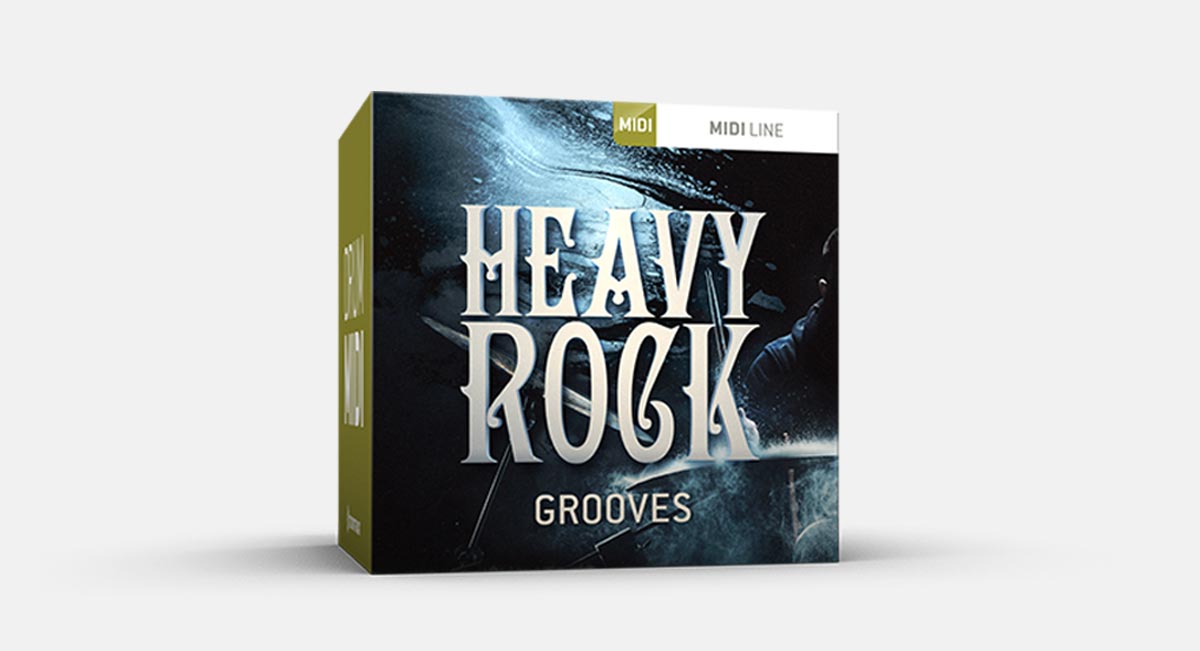 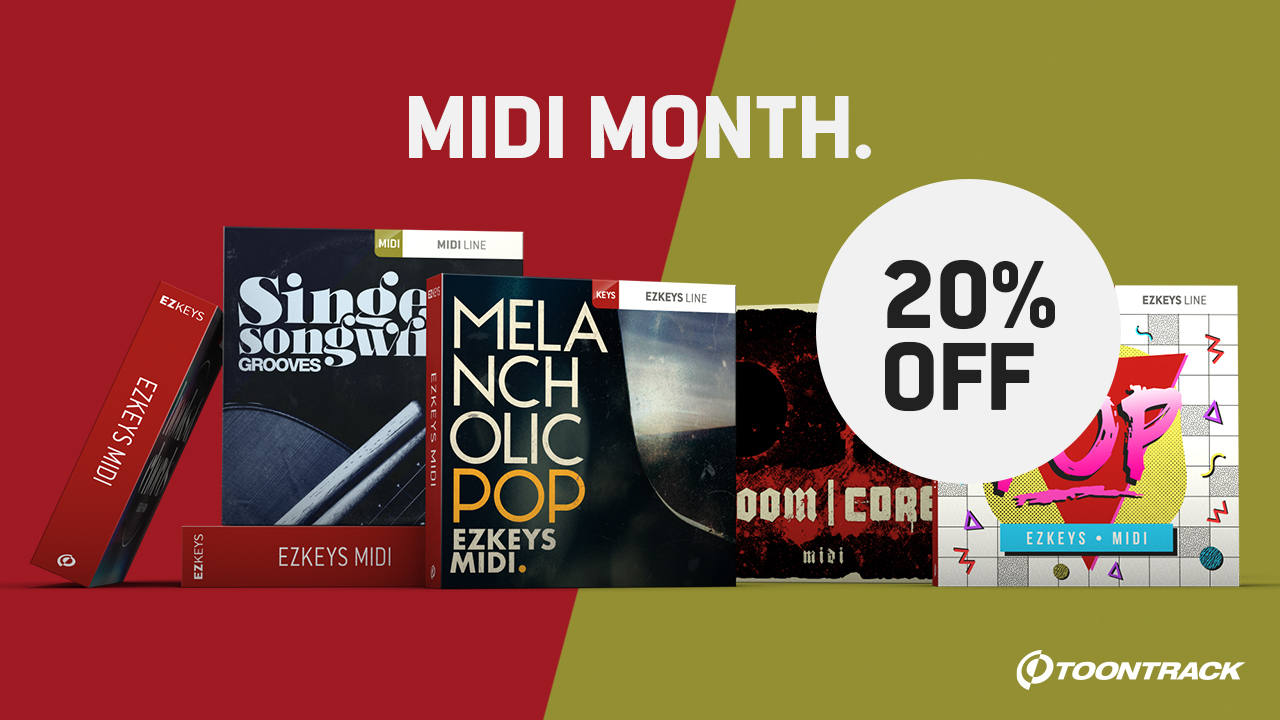 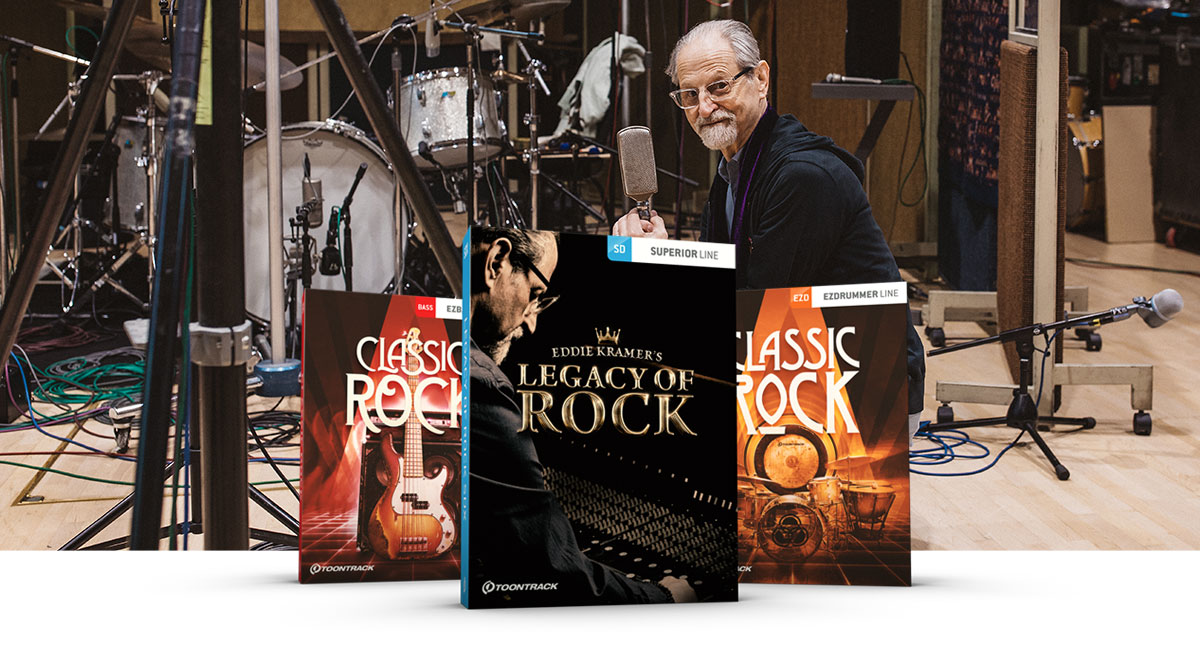 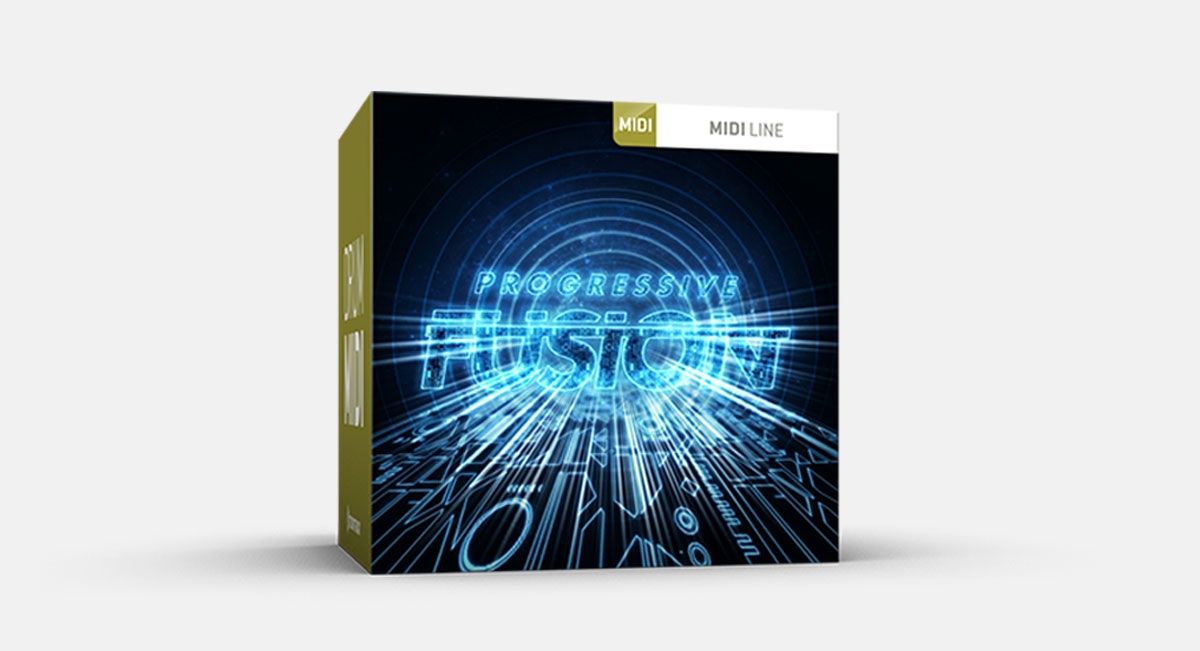 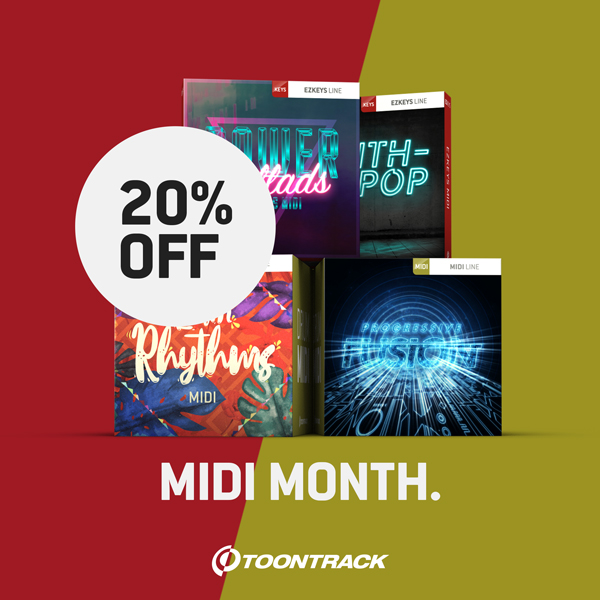 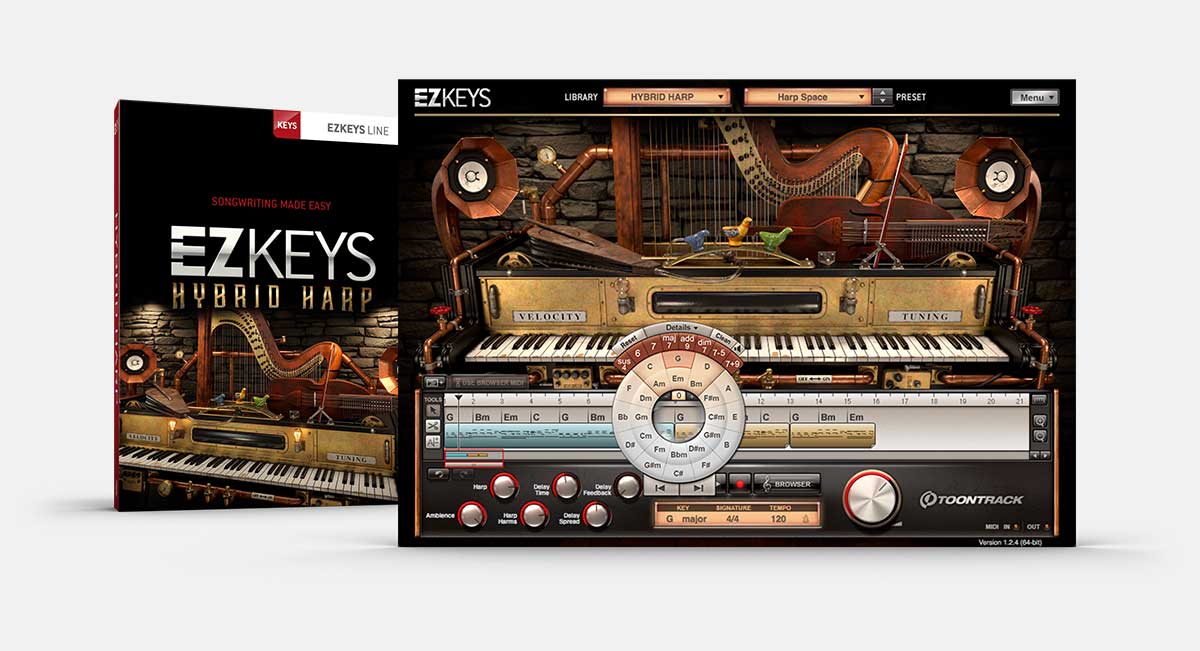 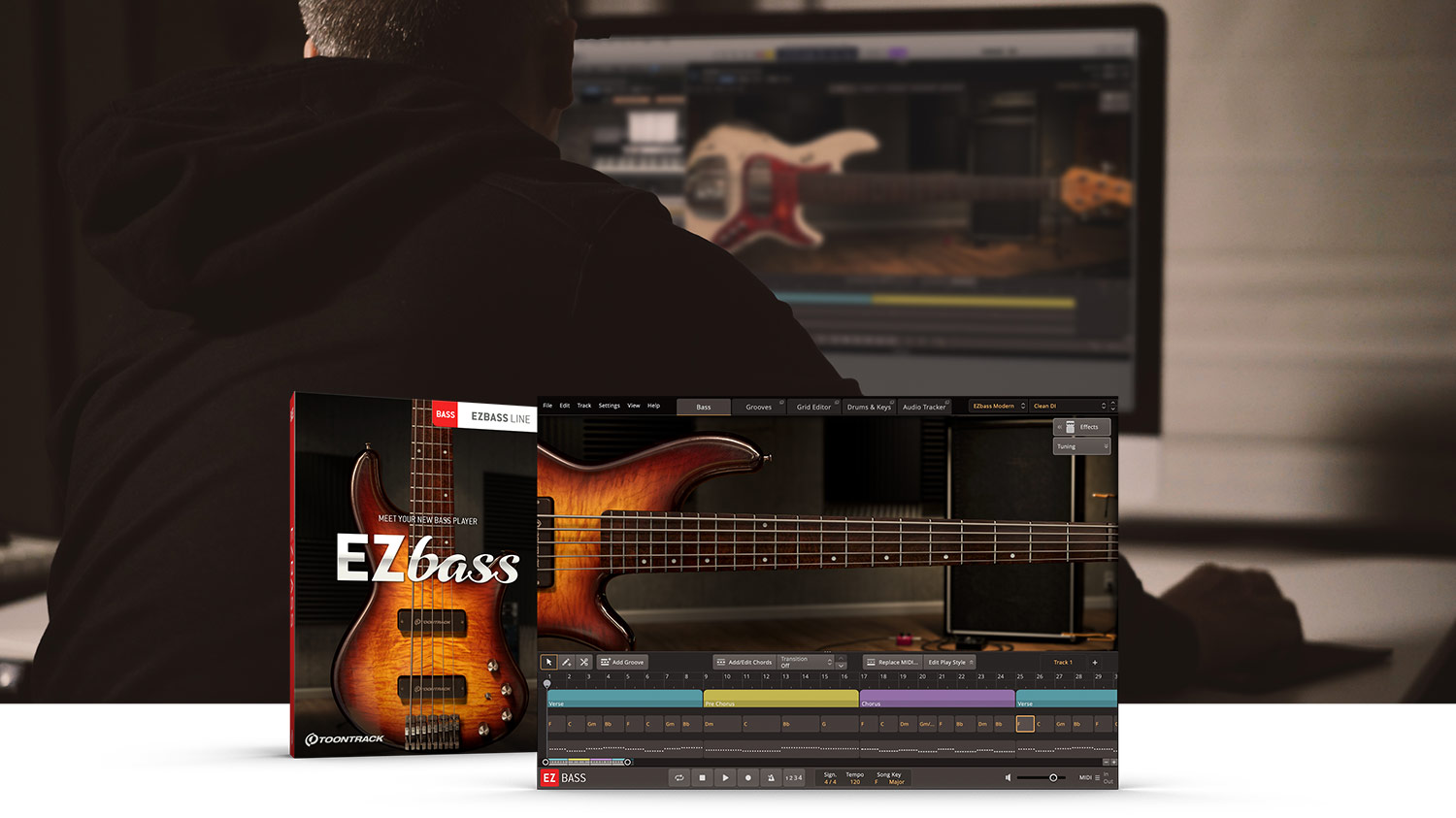 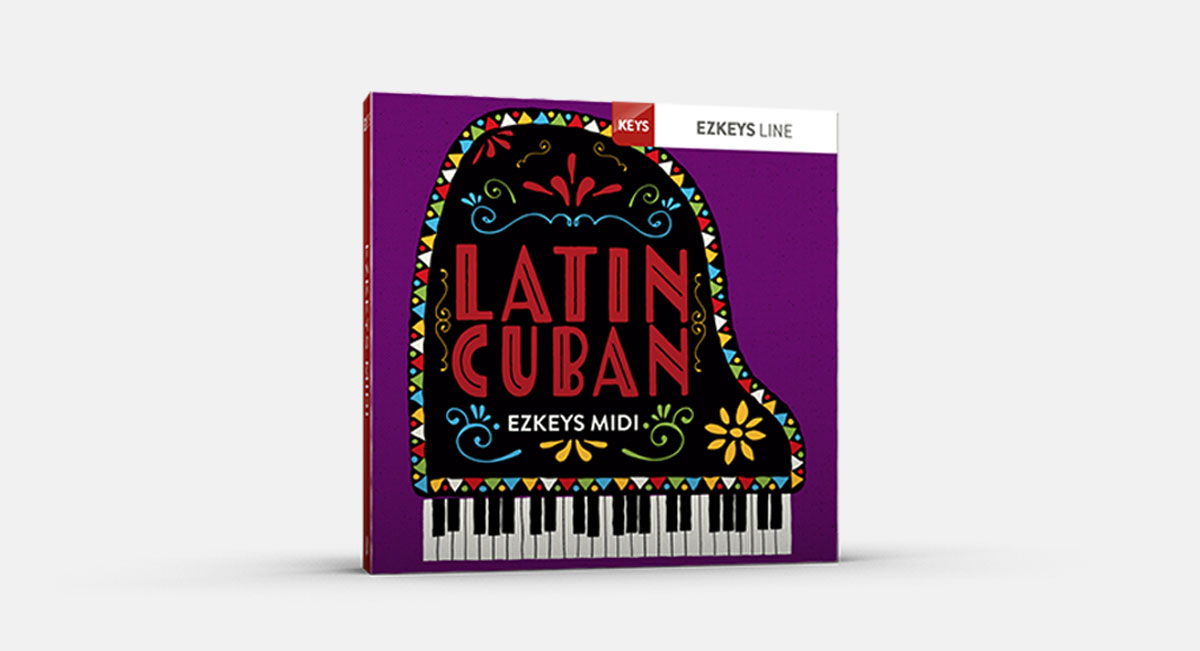 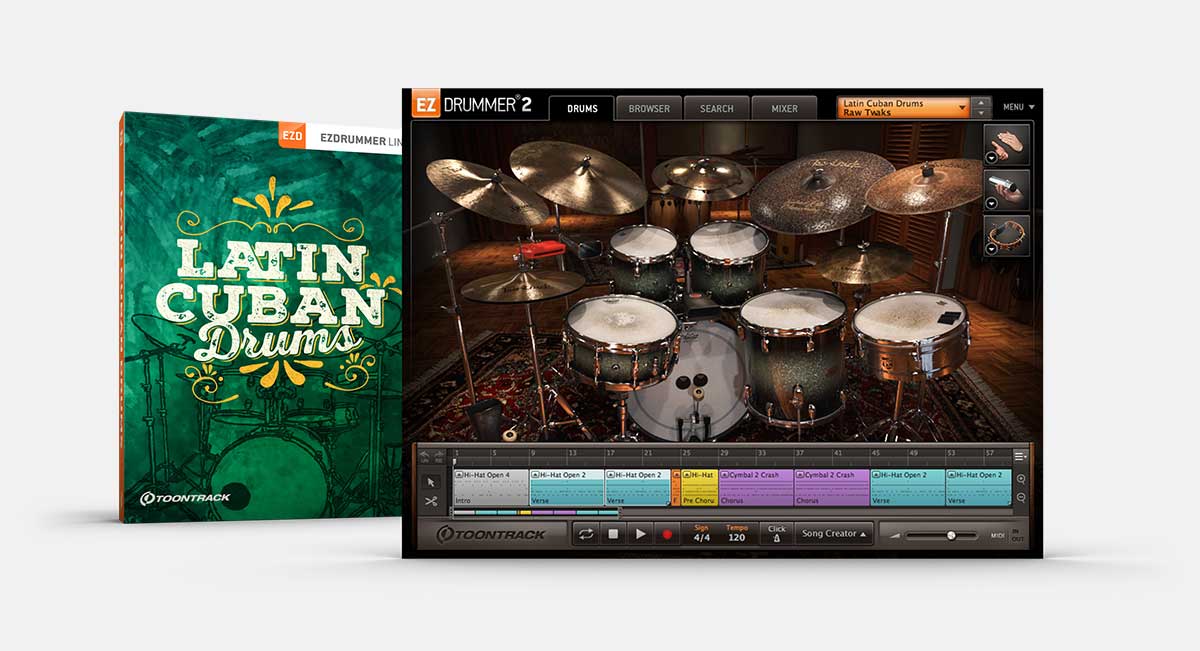 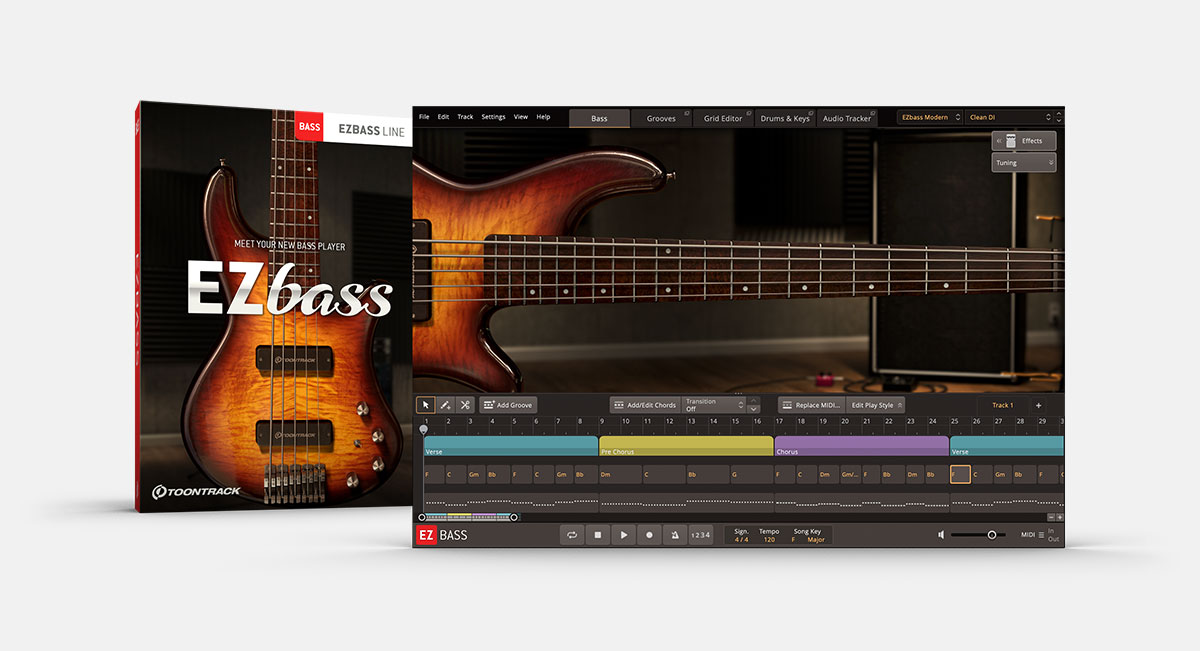 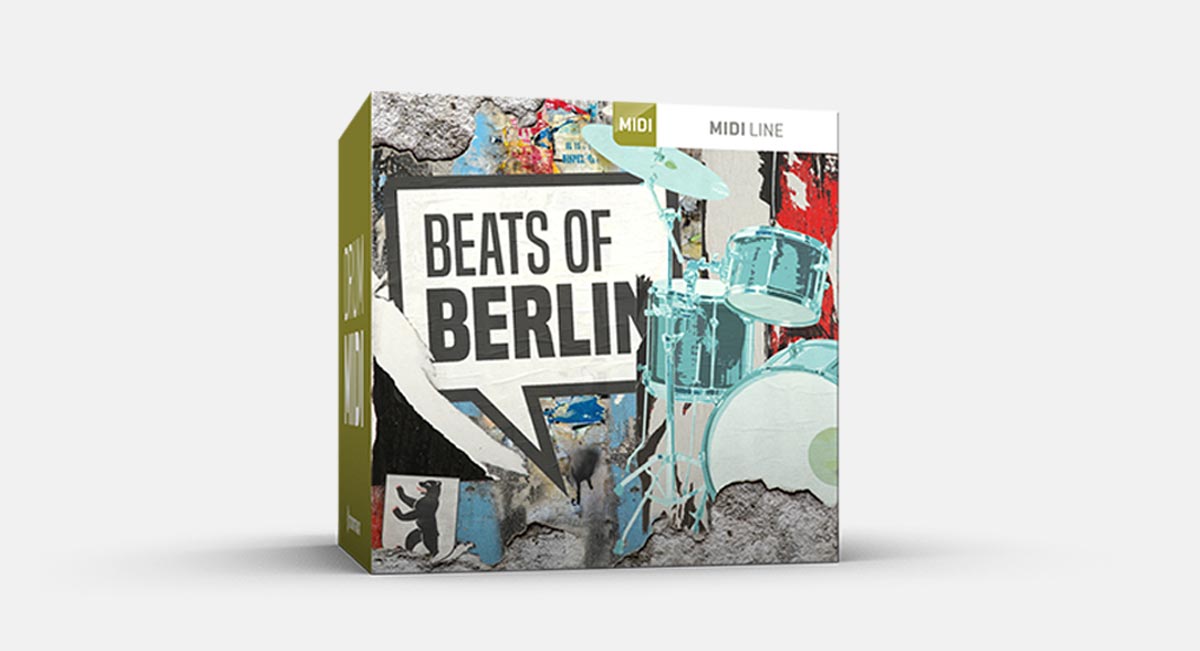 SUPERIOR DRUMMER 3
We use cookies to give you the best possible service. If you continue browsing, you agree to the use of cookies. Read more I accept
×
menu
< previous
Play / pause
> next
0:00
0:00
volume
×