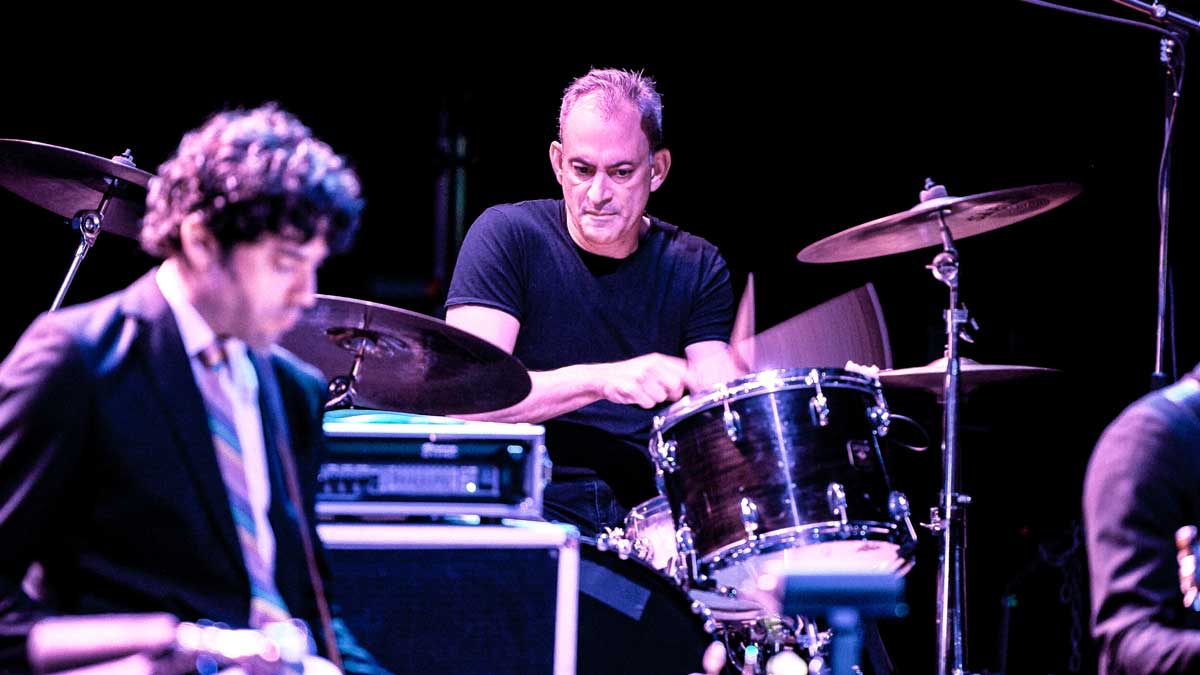 When and how did you realize you were destined to pursue a path in music?
Ha! I finally met Ringo Starr and the first thing I told him was “I’m one of those guys who saw you on Ed Sullivan”…he said “You’re a drummer then…come here”. He gave me a big hug. It was very emotional for me. I hadn’t realized just how much he’d inspired me.

Is there an event, production or occasion in your career that got you on to the next level?
Or did it happen gradually? It happened gradually with a series of significant events along the way, but one of the most impactful was in 1978 when I’d taken a semester off from Georgetown University and I was living in Topanga Canyon, CA. I was blessed enough to become a friend of Freddy Tackett. He’d played on all the huge records in my collection, so as a teenager I was in awe of him. Many nights he and his wonderful wife Patricia would invite me to dinner. After dinner, Fred would put on a record and we’d just listen. Whether it was the live recording of The 1976 New Orleans Jazz Festival, Stravinsky or Miles Davis, we’d listen to the record in silence until in the middle of the piece he would stop and say, “sing me the oboe part” or “what’s the upright bass player doing ?”.  The first few times I was lost ,but I caught on quick. He taught me how to listen; to deconstruct the music. My reward was getting to meet and jam with some incredible musicians like Lowell George of Little Feat. One night I got to play drums with Freddy, Klaus Voormann & Billy Payne. Then someone tapped me on the shoulder to sit in on the kit and it was John Dinsmore of The Doors!

You’ve had a long career and worked with anything from theater and musicals to film and everything in between (not to mention some of the amazing people you have worked alongside!). If you look back and had pick out some highlights, what would they be?
In addition to the aforementioned jam sessions, playing with Lionel Hampton at the Playboy Jazz Festival felt like being a part of history. Then in 2001 I composed the first piece of music ever broadcast on satellite radio when Sirius launched. It was performed by the National Symphony with Leonard Slatkin conducting. Most recently I had the honor of recording some music from a musical my wife Vita and I wrote called “Magic, Misfits & Mirrors” with Steve Jordan producing and playing drums, Will Lee on bass and Jeff Young on keyboards and lead vocals… I’m still on a musical high.

For close to 20 years now, you’ve in the in-house writer for Sirius XM, which means writing music across the genres and often with a quick turnaround. What are some of the best sides of this job and what are some of the creative challenges, if any?
The best part is every day is different; one day I’m working with Torae (rap artist) on a rap style show theme, then a Cousin Brucie ‘60s-type segment theme, scoring one of our national TV commercials and then a whacky music bed for Howard Stern. The challenge can be getting into the heads of the folks who come to me for music. I call it “sculpting fog”. I have to create what they have in their minds. I strive to create a comfortable atmosphere, so when it’s time to present what I’ve composed, they respond honestly. This way, I can be more effective in getting folks what they want. Saves time for everyone involved.

Tell us about a typical day on the job!
Most morning I use to mix whatever I’ve been working on the day before. That way I attack it with fresh ears. If someone has booked a time to discuss a project, I try to set it up for 11 a.m. (or after). I’ll usually meet with channel programmer or genre VP and discuss what they are looking for…what genre, BPM, lyrics…etc. They might give me some examples of established tunes they play on their channel for a point of reference. Then I get cracking.

Oh, as far as writing for film… Someone’s hiding, terrified in a dark closet. Outside, heavy, dragging footsteps slowly approach down the hallway. What do you hear, what would you write?
For that type of scene I would start with acoustic double bass and cellos. If I had the budget for live strings, I would ask them to be aggressive so we can hear the bows squeak across the strings and let the players be a bit sloppy so we hear those imperfections created by the friction of the bows on the strings. Then I would build upon that with an ominous synth pad building in intensity as the steps get closer. Low toms would start a pattern that builds. I would also add some sound design (wood floor creaking, distant howling wind).

What Toontrack products do you use and how do they help you in your creative process?
Superior Drummer 3 is my “go-to” for any genre of music. I started my career as a drummer and most genres’ musical foundation is the rhythm. Almost every project I do, I start with the drums or percussion and then build from there.

How do you cope with writer’s block (we’ve all been there!)?
I once read that Michelangelo looked at sculpting as setting the statue free from the block of marble. If I run into any sort of “writer’s block” (as I mentioned), I start with a drum pattern and keep adding instruments…playing it back over and over again…then chiseling away the parts I don’t need.

When working with something that’s also your passion, how do you balance job vs. life/family and spare time?
My wife is a brilliant classical musician as well as my partner in our side business Z Sauce Music. Our daughters are very musical as well. We love to go to musical theater and music performances together. There are times when I’ve been in the studio all day and I don’t want to hear anything (including music or TV) and we walk our Bernese Mountain dog, Ringo. Our dinners together are a great time to catch up on our days. They tend to be a joke fest. My wife and I met when I was the Music Director at the Groundlings, so comedy is a common thread.

What’s next on your agenda?
Musicals (in addition to my work at SXM). My wife and I have four different musical plays in various stages of development. Magic, Misfits & Mirrors will be part of the Page-to-Stage Festival at the Kennedy Center in Washington, D.C., Labor Day Weekend 2018. We wrote the book, music and lyrics. It’s is an original story following the ups and downs of an eclectic group of social misfits whose common thread is a quaint urban café and its proprietor Katy. Montage, a world-renowned conjuror, and Katy are drawn together through the loss of a mutual friend to PTSD. Lolita, a Russian illegal immigrant, is in search of her true calling; the businesslike Sherry and flower shop owner Jerry yearn to find their sexual identities through their on and off romance while two street philosophers, the Rastafari Siggy and Jugni, a Hindu, seem to pop up in the most inopportune times with their psychological perceptions and commentaries. The group’s dreams, losses, and love stories weave through the musical’s narration to paint a stunningly raw and emotional portrait of a true community that heeds the call to bond together through love and magic when tragedy strikes. We’re also working on theme music and bumpers for a new comedy TV pilot.