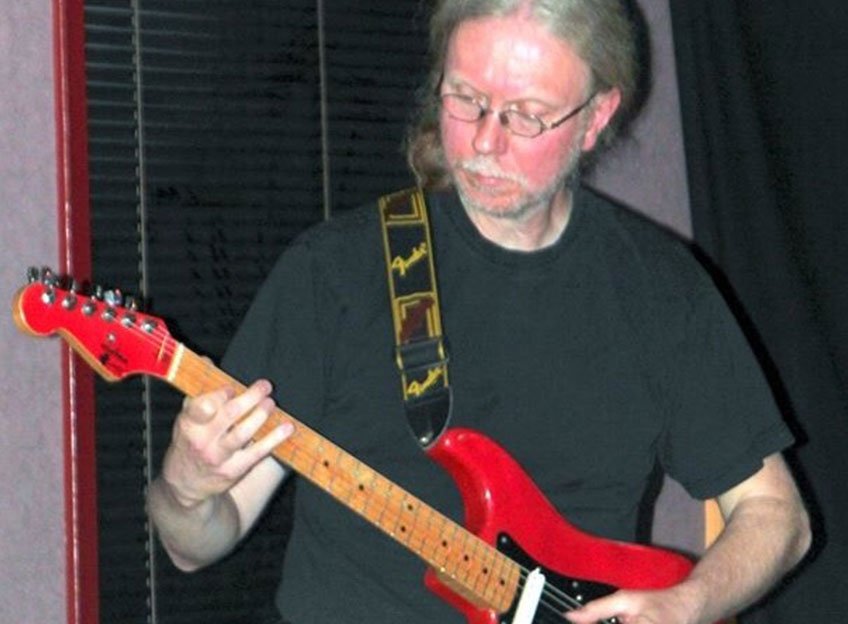 When did you realize your passion for music and how come you ended up playing guitar?
– When I heard “Yesterday” at a friend’s house.  I was eight :-). A more defining “guitar moment” was years later, hearing Norwegian guitarist Pete Knutsen live. His slightly dirty jazz sound and blues/rock with a touch of bebop made me think, “that’s it, I want to play like that!”

What’s your main guitar right now?
– I guess that must be my Guitar Workshop (Norwegian company) strat.

Any other guitars in your collection?
– I have a lot of guitars, but they’re all really “tools of the trade”. Other “main” guitars are ES-335, Les Paul Custom, 2 Strats, a Tele, Epiphone, Joe Pass, Martin D-16GT and Takamine nylon string. Then there are guitars that I don’t use that often, but still need now and then: a Gretsch Electromatic hollow body,  Line 6 Variax 500, Ibanez Prestige, Takamine 12-string,  Gold Tone roundneck dobro, Wechter/Sheerhorn squareneck dobro, Høfner guitarbanjo, Supro Lapsteel.  And some more….and all (or most) of them are lefties.

What did you use to produce the guitar tones on “For Leo”?
– The signal chain was something like this:
Guitar Workshop Strat – Wampler Ego Compressor – Backstar HT Dual – Vox Night Train NT15H – Mesa/Boogie 1-12 EV cabinet – SM57 – ART Pro MPA – TC Konnekt 24D – Logic on Mac. I guess I used a bit of UAD LA2A and a ping pong delay in Logic.

What Toontrack products do you regularly use?
– I’ve used both EZdrummer and Superior Drummer for many years, and I love them both! Especially EZdrummer 2 is fantastic. I trigger them with a Roland TD-3 kit. It’s great fun,  even though I’m not a drummer 🙂

Looking ahead, what’s your ultimate goal with your music and guitar-playing?
– I’ve been fortunate enough to make my living as a musician for a long time, and I guess my main goal is to be able to continue doing what I have done for many more years; playing guitar when someone ask (and pay 🙂 me to, and do a bit of producing in my studio. I plan to record some more guitar tracks when I have time for it. It would be great if that could end up as a guitar album of some sort, and maybe even get to play some of it live (if I dare to:-)! I’m kind of a secret rocker, and I would love to do a (pop-)rock project of some sort (maybe a trace of country?). For that I need a singer and a songwriting companion! Anyone?

A quick rundown of your pedals and outboard?
– My main pedal board(s) are quite simple: Blackstar HT dual – Line6 M9 or M13 and maybe Boss GE-7 for some additional EQ. I often bring a second pedal board if I need something extra for a gig. Usually a Wampler Ego Compressor, Digitech Screaming blues (for “almost clean but with an attitude”) a clean boost (Vertex, Exotic RC or EP) and a GigRig Quartermaster 6 for true bypass and sometimes as a giant AB(CD..) – box to route my signal to different places (amp, DIs for acoustics etc.) After buying an UAD Apollo Twin a year ago,  even my mic pres haven’t been used that much. The unison preamps are great!

String gauge and pick of choice?
– Mostly D’Addario 10-46. Mainly Dunlop Tortex Standard .96mm. I use the round end(s), filed to a pointed tip (with a different angle
than the original tip – nerdy, I know 🙂