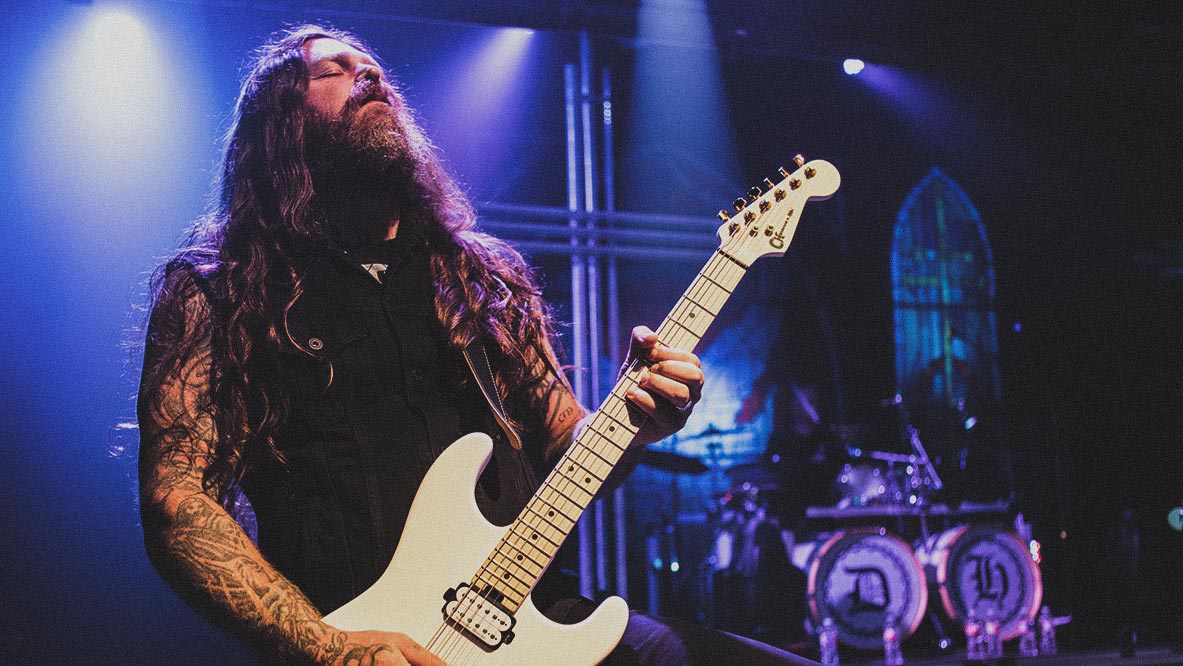 How and when was your interest in music sparked?
I would sneak into my older sister’s bedroom and gaze at the posters on her walls. The creepy and dark imagery really pulled me in.

Was playing guitar always your first and only choice or did it start with something else?
I tried the saxophone. Probably because The Simpsons came out and I thought it looked cool. I got the main hook for “When the Saints Go Marching In” and stopped. It wasn’t for me.

Since you joined Demon Hunter in 2011, you have been involved in engineering/producing all of the band’s records. Is it different producing for a band you’re personally a member of?
Not really. It’s actually the ultimate project. I feel a much stronger sense of pride when it’s your own music. Those long nights in the studio seem that much more worth it when you get to see your name on the album packaging.

You’re also active as a producer/engineer outside of your current main band. Tell us more about your work in these fields with other bands.
I live in Nashville so there is no shortage of artists trying to make a record. I record metal for the most part but sometimes a rock or country band would come my way and it feels like a breath of fresh air. Those artists and musicians are always blown away by how much attention I pay to every single detail. So much scrutiny and fine tuning is involved when producing metal that makes you razor-sharp for other genres that don’t necessarily subscribe to a specific sound.

After almost a decade in Demon Hunter, there must be tons of great memories? If you had to single out a few that you think stand out, what would they be?
We got to play on a metal cruise ship. It was basically like taking a vacation with your buddies. Heavy metal summer camp on a ship with all you can eat soft serve ice cream. Also, my face and body were scanned in to be used as a playable character for a video game called Killing Floor 2. You can play as me and shoot zombies. My character’s name is Oisten Jagerhorn and he is a viking biker looking dude. They didn’t use my voice though, so don’t assume it’s me making all those bad Swedish impressions!

Out of everything that comes with being in a band – writing, recording, jamming, touring, traveling (the list goes on)…what is your favorite part?
I think the final week of production, just before you send the album off to get mixed, is my favorite part. It’s basically me, Ryan and Patrick sitting in a studio for 12 hours a day going over the whole thing with a fine tooth comb.

What does your personal writing spot or home studio look like in terms of gear?
I have my guitar running a parallel split into Pro Tools for direct sound, along with my processed Fractal sound. I fumble with the click track and get the tempo close. Then I use the “Tap to Find” feature in EZdrummer 2 to get a general beat for my riff. Once you hear those drums, it feels better to jam to than a click while you lock in on the tempo. I use whatever guitar makes sense for the riff. I have a fleet of Charvels with various pickups and fixed or tremolos bridges. A Chapman baritone guitar helps a lot with low tunings. My Halo guitar with Evertune bridge and Bareknuckle pickups has really become a constant due to the fact that it just never goes out of tune. The intonation is spot on all the way up the neck, which makes it perfect for layering tracks. I still use the same Apogee converters I’ve had for 13 years. API and Focusrite pre-amps. UA 1176 compressor.

On that note, what’s your process like when composing for an upcoming record? Do you set aside dedicated “on the job” time to write or does it happen when it happens?
I think of a riff when I’m mowing the yard or driving in silence. I’ll sing that riff into my phone. When I later get a chance to sit down with the guitar, I’ll play those voice memos back and if they don’t sound cool or make sense, then I scrap them. If I am still into the riff, then I figure it out. Once I hear a drum loop, the riff takes on more personality and I go from there as If I am jamming with a drummer in a garage.

ou’re also a member of the bands Destroy Destroy Destroy. Any news on that front?
Nah. All the other guys in that band have moved on to other things that aren’t music-related. I am the only “lifer” that continues to torture myself with trying to “keep the dream alive!”

You have two albums out in 2019, “War” and “Peace.” What was the thought process behind this massive project?
Demon Hunter has always tried to have a balance of heavy to lighter songs on each album. The terms we use for each type would be things like “barn burner,” ”mid tempo,” “ballad,” and “heavy.” This opened us up to a wide range of fans that would say stuff us like, “I love your heavy stuff! I just wish you’d only play stuff with double bass!” One minute later we’d hear, “Your music means so much to me! I just wish you didn’t scream so much.” We had so much material for the next record we figured why not try and make them into a full heavy album and a full rock album. Since the beginning, a Demon Hunter record would always come out every 18-24 months. Our album before “War” and “Peace” was the longest wait time for our fans, due mostly to the fact that we all started having babies around that time. Not wanting to look like fatherhood was turning us in to a bunch of lazy bums, we decided to drop two albums at once to make up for the slightly longer wait for the previous release.

Do you still practice your instrument on a regular basis? Do you have a routine that you follow?
I don’t have a practice regiment. Sometimes I wish I did but I like that every time I pick up my instrument it’s because I want to. However, before a tour starts, I do a complete run-though of the set every single day for about 3-4 weeks in advance. Sometimes I’ll play it twice a day.

Other than good old practice, what’s your tips to aspiring guitarists out there?
Meet up with other musicians often. You can learn plenty online but they is something about feeling the air in the room move because there is a roaring guitar amp competing with a thumping kick drum and cracking snare.

You are an avid Superior Drummer 3 user. How do you use the program in your work and how does it help your creative process?
For the writing process, it’s the very first thing I open in a new session. If I tried to send a riff idea without the drums to my other band mates, they’d wonder if something was wrong with me. For album production, I am one of those nerds that dig waaaay in to the sounds and make them my own. Being able to manipulate so many aspects of the kit is very important to me.

What other Toontrack products do you use?
EZmix 2 and EZkeys. When I don’t have my Fractal handy for guitar tones, I use any number of amp FX on EZmix 2. I would honestly just skip my Fractal, but its nice to keep that DSP free so I can throw on a ton of other plugins, which is inevitably going to happen with Superior Drummer 3. It’s also a great tool to throw on just about anything from overheads to vocals when I’m feeling like its missing something. EZkeys has my favorite piano sounds ever. We use them live when Patrick plays a midi keyboard on stage.

If you weren’t a musician, what do you think you’d do for a career?
I studied electrical engineering in college. Either that or an architect.

Best studio or stage moment ever?
My favorite moments are any time we get to open and share a stage with bands I grew up listening to.

…and worst?
Worst would be when I lost the files to an entire session. Three days tracking three songs for a metal band were all gone. Still makes me sick to think about.

If you could only keep/play one guitar moving forward…which one in your collection would you pick and why?
My Paul Reed Smith I saved for and bought with my own money when I was 16.

You could only bring one record to listen to during a massively long tour, which one would it be and why?
“Diamonds and Gasoline” by Turnpike Troubadours. It’d be a pleasant departure from the live metal touring bands, and I never get tired of any song on that album no matter how much I hear it.

Big festival or club show?
Club show for sure.

Name one piece of gear you can’t live without in your studio (and it can’t be the guitar or the computer!).
Physical gear? My Fractal. Software would be Superior Drummer 3.