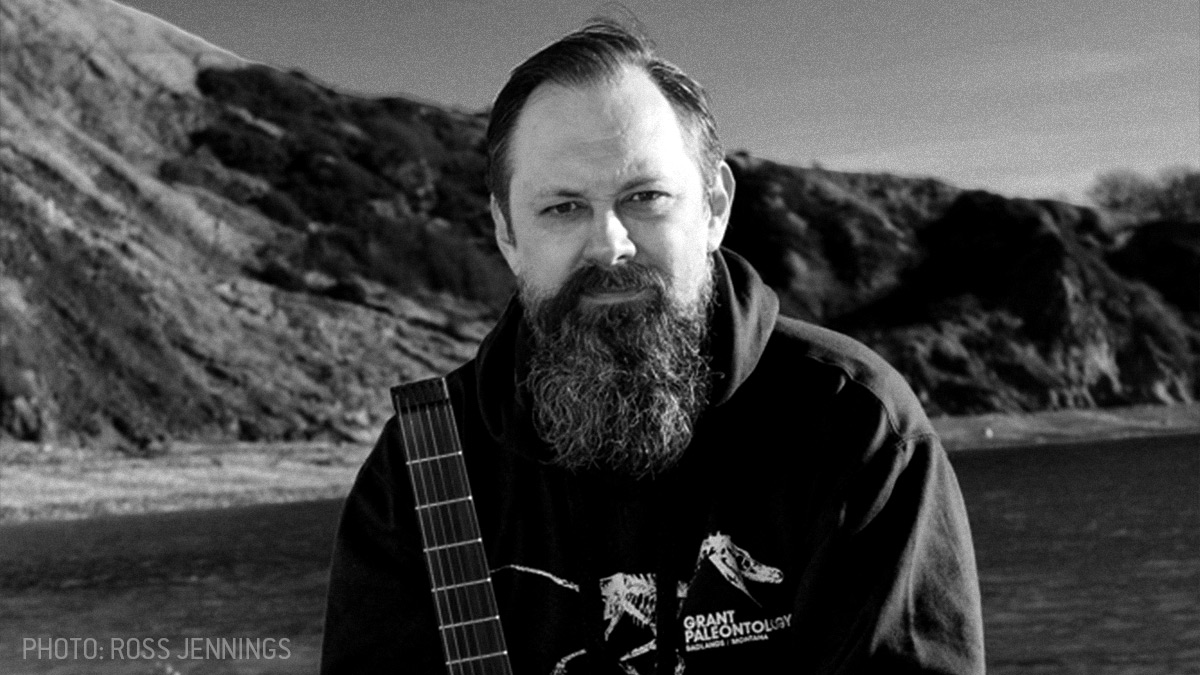 If we rewind to the very beginning, what got you into music in the first place?
When I was a kid, I went through three definite musical stages: The Muppet Show, Queen and Metallica. For a couple of years, I would only listen to Queen and nothing else, and the same with Metallica! I had a nylon string acoustic guitar I tried to figure out riffs on, but it was probably tuned all wrong! When I saw an Epiphone Explorer in a music shop window I begged my parents to get it for me, which they did and that was the beginning of the road for me. I still have that guitar!

Was playing guitar always your first and only choice or did it start with something else?
Yes, I started out trying to figure out riffs by ear and there were a couple of other metalheads at high school, so we’d swap “Master of Puppets” riffs and learn from each other, as this was pre tab! I remember the school drama teacher enlisted us as ‘the band’ for the production of “Macbeth” and we basically played a bunch of King Diamond, Candlemass and Slayer riffs to all the unsuspecting parents throughout the play, which was so much fun I thought that’d be a good thing to do as a career. By complete coincidence, that same year, the school took to see a professional production of Macbeth in Hammersmith, which Brian May had written the music for. I thought it was the coolest, so that sealed the deal!

Most people likely know you from the band Haken, but you also just released your first solo album. What was it like writing your first solo effort and how does it differ from your Haken stuff?
With Haken the writing style is totally democratic and equal across the band, with everybody throwing ideas into the music and we work through everything, piece it together and develop it until everybody is happy. I love the process and there’s always so much to learn from the other guys and we have fun bouncing ideas around. With Tiktaalika it was just me writing everything, which was a different, but equally a fun challenge. I wrote all the music and lyrics and demoed every instrument, which seems like more work, but in a way it was a more direct, quicker process as I didn’t have to coordinate the workflow with anybody else, I could just please myself.

It’s featuring quite a star-studded cast, like Jordan Rudess, Tommy Rogers and many more. How was it like working with such a broad range of artists and how did they add musically to your songs?
Absolutely! Jordan played a synth solo on the track “In Alluvium,” which is an amazingly spontaneous one-take blast of Jordan genius which really propels that section of the song along. Vocally, the album is diverse – from death growls to operatic. I had demoed all the vocals myself to place the syllables and melodies, but I don’t have the vocal ability to create the sound I was hearing in my head, so the various singers took the demos and performed the songs the way they should be! As you say, Tommy from Between the Buried and Me sang on the first single “Arctic Cemetery” and although I wrote it with him in mind, he delivered it incredibly and exceeded my expectations of the song. The same thing with Daniel De Jongh, who Textures’ fans will recognize, and Vladimir Lalic, who is one of my favorite singers. As this is an international cast, we did everything over email, but everybody was totally professional and made my life very easy!

The album also includes your debut lead vocal performance on a record. Being a guitar player, was it daunting at all to suddenly be in a different kind of spotlight?
That was actually the only song I didn’t have a specific singer in mind for. I had a couple of ideas of who I could ask and I thought about it for a while, but in the end I decided to keep my demo vocals. The focus of that one isn’t necessarily about the voice as much as the overlapping and interlocking rhythmic layers of the lyrics, and it seemed to work with my voice.

After having played an eight-string guitar for the last ten or so years, you wrote this entire album on a six-string. How was that?
It was a way of getting back to my ‘80s thrash and ‘90s death metal roots. Creatively it helped to get into a certain headspace, just to approach writing from a slightly different angle than I would for Haken. When I started using the 8-string, it was right at the beginning of that movement which Meshuggah’s “Nothing” album started. Nowadays that’s almost the norm for metal, so I consciously wanted to approach Titkaalika differently to have an almost timeless metal sound.

What Toontrack products do you use?
As well as Superior Drummer 3, I use EZdrummer, EZbass and EZmix 2, which enable me to get my ideas down very quickly with minimal fuss. When I’m in writing mode, I don’t want to have to worry too much about how the mix sounds, so I love that Toontrack plugins allow me to get a working mix with minimum fuss.

If you weren’t a musician, what do you think you’d do for a career?
I’d like to think I was doing something creative, making movie props or being involved with animation seems like my kind of thing. I got to dabble in some of that with my Tiktaalika artist friend Dan Goldsworthy, who worked with me on the videos for the single releases. We developed a whole concept around a kids cartoon character called Timmy Taalik, which was a real blast!

What’s next on your agenda?
Next up, we’re releasing the next Haken album which is all delivered and in the hands of the label. We’re really excited about it! Also, we have our first European tour in a long while, which kicks off at the end of February 2023. It’s a Haken and Between the Buried and Me double-headliner and I’m sure it’ll be wonderful!