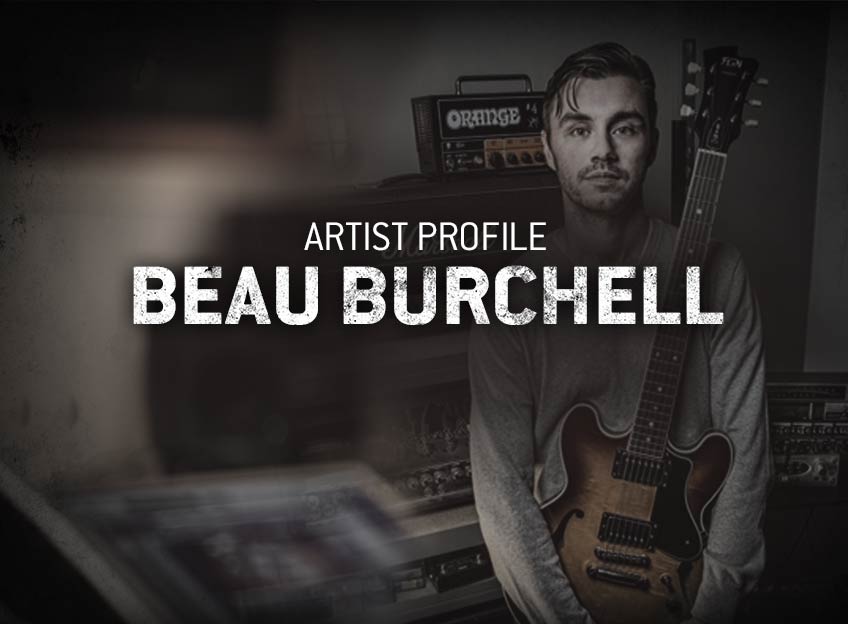 We caught up with longtime Superior Drummer 2 user, Saosin songwriter/guitarist/vocalist and producer/mixer/engineer Beau Burchell to talk about his career, the music industry and making music in general.

When and how did you discover your passion for music?
– I came from a very conservative household, and was only allowed to listen to music with positive lyrics, which meant I had to do my shopping at the Christian music store. It wasn’t as bad as it sounds because there were a lot of cooler “Christian hardcore bands”. But they never seemed to be as cool as the real deal. Every holiday, my cousin would come visit with some sort of cool Slayer shirt and long black hair.  He had like a BC Rich or Jackson guitar. Something like that and he would play these riffs that sounded like nothing I had ever heard before. I remember him playing Metallica’s “Sanitarium”, and I decided I needed to play the guitar. I completely connected with it and knew it was what I needed to do.

How come you ended up doing this type of music. Is there a specific album or event that steered you on this path?
– Honestly, I like an extremely wide variety of music. My wife still laughs at me sometimes when I’ll listen to some strange pop song right after something like Meshugguh. But I would say that the same cousin is who got me hooked on metal. Then I played in some hardcore bands and loved the raw aggression I felt through it. But I missed the sadness and emotion from emo and pop music.  So I wanted to play music that had the raw energy of hardcore and metal but the emotion of emo and pop melodies. It’s that dichotomy of ugly raw power with fragile beauty that I love.

Saosin was one of the first bands to really embrace social media as a promotional vehicle back in the day when this was new. How much of a role do you think this played in the early stage of your career?
– It was huge for us. It was the wild Wild West and it was exciting. It was a time when ‘zines were around and you had to go to shows to discover music. But then sites like Friendster and MySpace came about and all of a sudden you could discover that someone in Germany also liked the same music as you. And they liked other music you hadn’t heard of, and you could look them up and find out about them. That’s how a lot of people found out about us.  We were very lucky to get in at that time.

These days, it seems harder and harder to get a message across in these platforms. Do you still work hard on social media and what is your one tip to new bands trying to reach an audience?
– Yeah, there is almost an opposite reaction to social media now. You’ve got twenty million bands throwing their music on your feed every day. Most of them aren’t even bands. Just people faking it trying to build a following. And the other ones really suck. It’s like junk mail. I don’t even read it, you take it out of the mail box and go straight to the trash. We don’t really try so much any more. We really try to be respectful of our fan’s time, and only go social when it’s important.

You’re also a producer/mixer/engineer with loads of productions under your belt. Is this something you intend to pursue?
– Ya. Producing is actually my first first love and real passion. I was producing records before I started Saosin. Then when Saosin unexpectedly started really taking off on a large scale, it just made sense to take a break from producing. Sadly, there were so many records that I could have produced if our touring schedule hadn’t been so insane. But now that our touring schedule is very selective, I am producing and mixing records year round, and it’s so exciting for me.

You engineered and mixed the latest Saosin record “Along the Shadow”. Is it harder to be involved in this process when you’re also an integral part of the band?
– I wouldn’t say it’s “harder” at this point because I’ve been doing it for so long. But whenever you produce your own music, it requires a great deal of discipline. I find you really have to compartmentalize the processes. You need to separate yourself during the writing, performing and producing and especially the mixing. Whenever I get rough mixes from bands I’m producing or mixing, I can always tell when the guitar player mixes the songs because the guitars are super loud. As a band member, when you are mixing a record, you really need to step back and listen to the song and what’s best for it. Not just “I need my lead guitars ripping loud”  On the writing and production side of things, you also need to not be so attached to the parts of songs. As a producer, I have the ability to tell a band that they need to change something or remove a section and I’ve got the final say. But when it’s your own band, it’s much more of a democracy. But thankfully, it’s just Chris (bass player) and I that write all the music. So we have a great system we have developed. If one of us feels very passionately one way or the other about something, then the other person will surrender. That has been great for us since we both have such strangely different tastes in music.

When mixing, where do you generally start? Drums, guitars, vocals?
– I work with so many different genres. Mariachi, metal, pop and everything in between. Each project gets attacked differently. But I generally spend the most time on drums and vocals. The right drum and vocal sound are so important to me. I have a lot of analog gear and I like to find the right combination that is going to work on the particular track. Sometimes it comes right away and other times I’ve really got to wrestle with it.vSuperior Drummer 2 makes it very easy to layer in extra sounds when I need them.

What Toontrack products do you use on a regular basis…and what problem do they solve for you when writing and/or recording?
– I use Superior Drummer 2 on a daily basis now. Thank God. I programmed the original Saosin “Translating the Name” EP using a Roland JV-1010. It took so much work to get it sounding decent. It’s so much easier to get up and running with Superior Drummer 2. Both Chris and I write all of our songs inside Pro Tools. We program the drums as we write the guitars. My go-to kit is the Avatar library, using the Metal Foundry Andy Sneap kick and snare on X-drums with a snare from The Progressive Foundry SDX also on an X-drum. I recently just got the EZmix Pack and I’m going to be firing it up later today to use on some guitar sounds for some new songs. I scored the trailer music for Brothers Grimsby with the legendary Chris Field using Superior Drummer 2 to write the drums, and then they ended up sounding so good we ended up keeping them for the final mix. Superior Drummer 2 lets me get a feel of how the drums will add to the song and they sound great which is inspiring to play to. I have also been using the room sounds printed into Pro Tools when I’ve been mixing records for other bands who tracked in a less than stellar drum room. That has been an absolute life-saver.

If you weren’t making music, what do you think you would do?
– I’ll be dead when I stop making music. Actually, I think I would have loved to be a lawyer. I love arguing and debating.

Best music-related memory?
– I am the world’s biggest In Flames fan. I remember seeing them at the Long Beach arena and Anders told me he loved our records and that he warmed up his vocals to one of our songs. I felt like the coolest person on earth. It was the ultimate validation. They are such an inspirational band for me.

What’s the worst thing that ever happened to you in stage or the studio?
– We were playing the Vans Warped Tour one year and I was late getting to the stage, and our stage manager was a real set time nazi. We have since become friends and we laugh about this story. I showed up late to the stage and had to take a piss, but he said “no”, and to get my ass on stage. So being the cocky shit I was at the time, I went on stage, went into a power stance and pissed my pants on his stage.  The look on his face was priceless. Actually that might be one of the funnier things that has happened to me. But we usually don’t have too many terrible things happen on stage for the most part.

Finally, name a few all-time favorite albums that you did not work on where performance, sound and feel all come together in perfect balance.
– In Flames “Reroute to Remain” and “Clayman”. “Clayman” got me into In Flames. “Reroute to Remain” is a pretty controversial record when it comes to production, but I absolutely love the raw live feel of it. I could die happy if I ever got to work with In Flames.

Third Eye Blind “Out of the Vein”. Another record that sounds absolutely fantastic to me. And there are so many cool hidden time signature treats in there.

The Mercury Program “All the Suits Begin to Fall Off”. I love the sound and feel of this record. I used to fall asleep to this record for a few years straight. It’s so nice.

Julien Baker “Sprained Ankle”. I saw her live and she sounded exactly like the record. She is so talented and emotional.

Nickelback “Dark Horse”. This record is absolutely the worst thing ever on a musical/lyrical level, but the Mutt Lang/Mike Shipley producer/mixer combo would be the ultimate learning experience. It’s the ultimate sound for radio rock.

Jimmy Eat World “Clarity”. This record is just absolutely perfect. One of my all-time favorite bands and favorite records. The sound is so organic, live and polished at the same time.

SOME OF BEAU’S WORK.

Aeges “Another Wasteland”, mixed by Beau.

The Bronx “Youth Wasted”. Produced, engineered and mixed by Beau.

Saosin “The Silver String”. Produced, engineered and mixed by Beau.