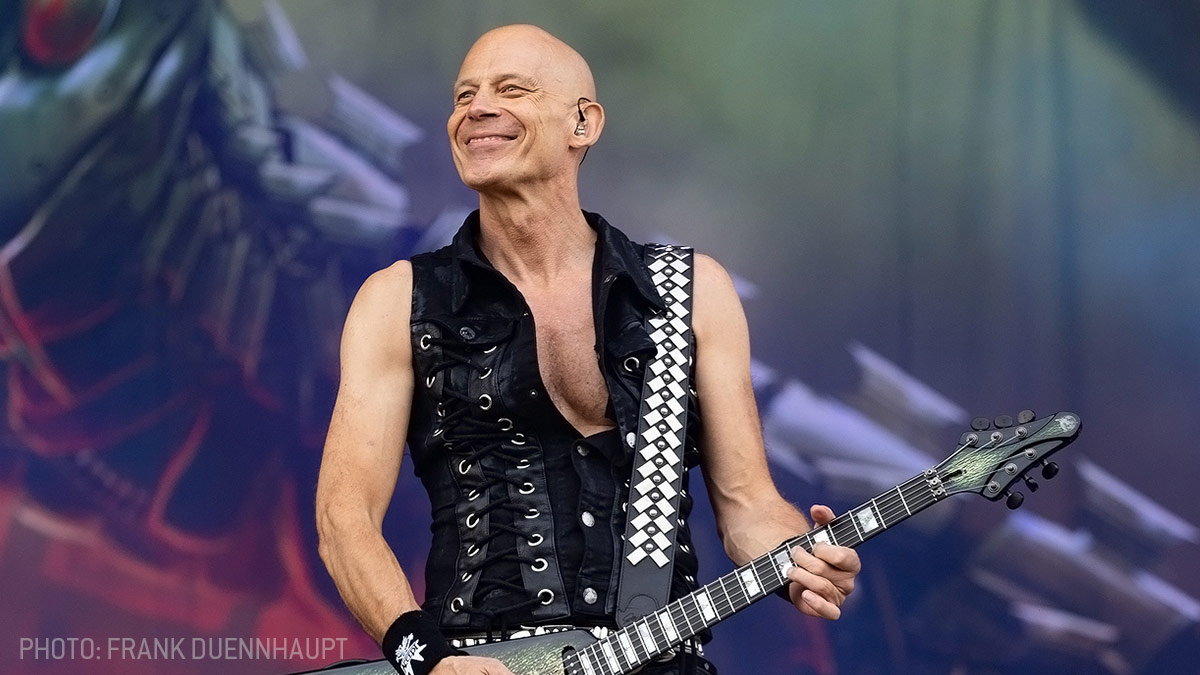 If we rewind to the very start, what got you interested in music in the first place and how come you ended up playing the guitar?
Back when I was teenager, a friend of mine had an electric guitar. I was so fascinated by it and just wanted to be as cool as he was, basically. I pestered my parents to get me one, and I finally got an acoustic guitar with the condition that I learned all the basics – including reading music. Pretty soon I got bored and switched to electric guitar. When I was 16, I joined Accept…and I’m still in the same band!

Growing up, which guitarists would you say helped shape the player you became?
Starting out, all my heroes were bluesy Strat players, like Richie Blackmore, Uli Jon Roth, Rory Gallagher and David Gilmore.

So from that to heavy metal…how come?
I never considered myself a blues player, those are just players I admired. But I don’t know how I ended up playing the music I eventually did. I guess growing up in the area I did here in Germany, it became an outlet and maybe a way of escaping the world a little bit. Playing metal also had sort of a shock value attached to it. You know, we all wanted to have long hair, make loud music and shock the parents, basically – and metal was perfect for that. Had I been born a little later, maybe I’d got into punk? Heavy metal just spoke to me – the power and everything about it.

So, you joined Accept when you were 16, have been active in the metal scene since the late ‘70s and show no signs of slowing down. What keeps you going?
Well, to be honest, we had a little bit of an early retirement around the end of the ‘90s and for a good ten or so years that the band wasn’t active. Coming back to it, I appreciated it so much more. I won’t ever let go again. In that long break, I did other things that were successful, but it’s not the same – there’s something magic about being on stage and making records and all.

Is that feeling even stronger now coming back to touring with full force after a couple of years of unwanted downtime?
Absolutely, it’s like you never know what you got until it’s gone. The pandemic opened our eyes to the fact of how much we love what we do and how fortunate we are to be able to do it. Travel around the world, screaming fans that know your songs…

And looking back on all these years on the road, making records and successes in general…what stands out to you personally?
Just the fact that we were able to break out of Germany and get international recognition during the ‘80s – that was a huge deal for a little German band. You know, touring alongside the bands we admired, like Ozzy Osborne, Kiss, Iron Maiden, Judas Priest and you name it. There we were, on the same stages. And now, just this summer, we played festivals around Europe and are still sharing stages with our childhood heroes. We just played some shows in Finland with Deep Purple and Uriah Heap and I grew up listening to these guys…and that’s awesome!

Out of everything that comes with being in a band and being a musician – writing, recording, jamming, touring, traveling (the list goes on)…what is your favorite part and why?
Being on stage is the highlight. That’s kind of why you make records, so you can go out and play songs to people who know them. That’s an immense satisfaction. You know, starting the opening tiff to “Princess of the Dawn” and everyone goes nuts. That’s pretty awesome. But there’s also the writing and recording process. It can be quite tedious, but there are these magic moments when a song just appears. It’s a an awesome feeling when you’ve created something that wasn’t there five minutes ago. It’s a bit of a magic process when you think about it. People always ask me where I get inspiration, where do ideas come from? Sometimes, you just don’t know.

But all these years, you’ve managed to pull off the feat of maintaining the band’s classic sound while still keeping it fresh and exciting. Is it hard to evolve without losing track of your roots? How do you find that balance?
It’s hard, because at the same time as you want to please your fans, you want to grow as an artist. Being the “sole survivor” in the band, I often find myself in the role of a referee, pointing out what fits the Accept sound and what doesn’t. It’s great to have the help of a producer like Andy Sneap, because sometimes even I am not sure. You know, I have a lot of ideas that don’t fit the Accept mold, so to speak.

What do you do with those ideas ?
They go on the digital waste pile, which keeps growing by the minute, haha…

So, no new solo album in the works?
Yes, there is something I’ve been working on. It’s more of a labor of love-type side project. I’ve done some classical albums in the past and I’m currently working with a violinist. We’re probably going to do a solo thing together at some point, but we’re still in the developing stages.

Having written songs since your teens and having been involved in creating iconic riffs like “Balls to the Wall,” “Princess of the Dawn” and many more, do you ever experience writer’s block and if so, how do you handle it?
Absolutely, but having done it for so many years, you know there are days when you’re drawing blanks. Inspiration usually comes back, often out of nowhere.

On that note, where does Toontrack come in to your creative process and which products do you use?
I use EZdrummer all the time. I know Superior Drummer is great, but I like to keep it as basic as I can. I have some of my favorite drum beats that always work for me. I pop those in and don’t do much until the song is moire developed. Then, I may go in and put the kick drums where they need to be and, towards the very end, I might add accents, a fill here and there, but I keep it quite basic. If the song is good, the rest will fall in place. I’ve seen so many songs that are weak at the core bout polished to death.

But do you keep your demos is a really raw state all the way up until final production?
No that raw, they are lot less raw than they used to be compared with the cassette days – those were very raw. Nowadays, I often keep the orginal demo and build on top of it. I keep what’s already good.Very often, at the moment of creation, it’s very spontaneous and that’s hard to repeat. We all know it, it’s demoitis … A demo has something that is hard to recreate. I especially find that true for solos.

So, what’s next on your agenda?
We have to start working on a new album. Actually, I’m writing as much as I can while on tour. So I have Toontrack with me even now on my laptop! I have a little travel guitar that always goes with me where I go. It fits in my suitcase.