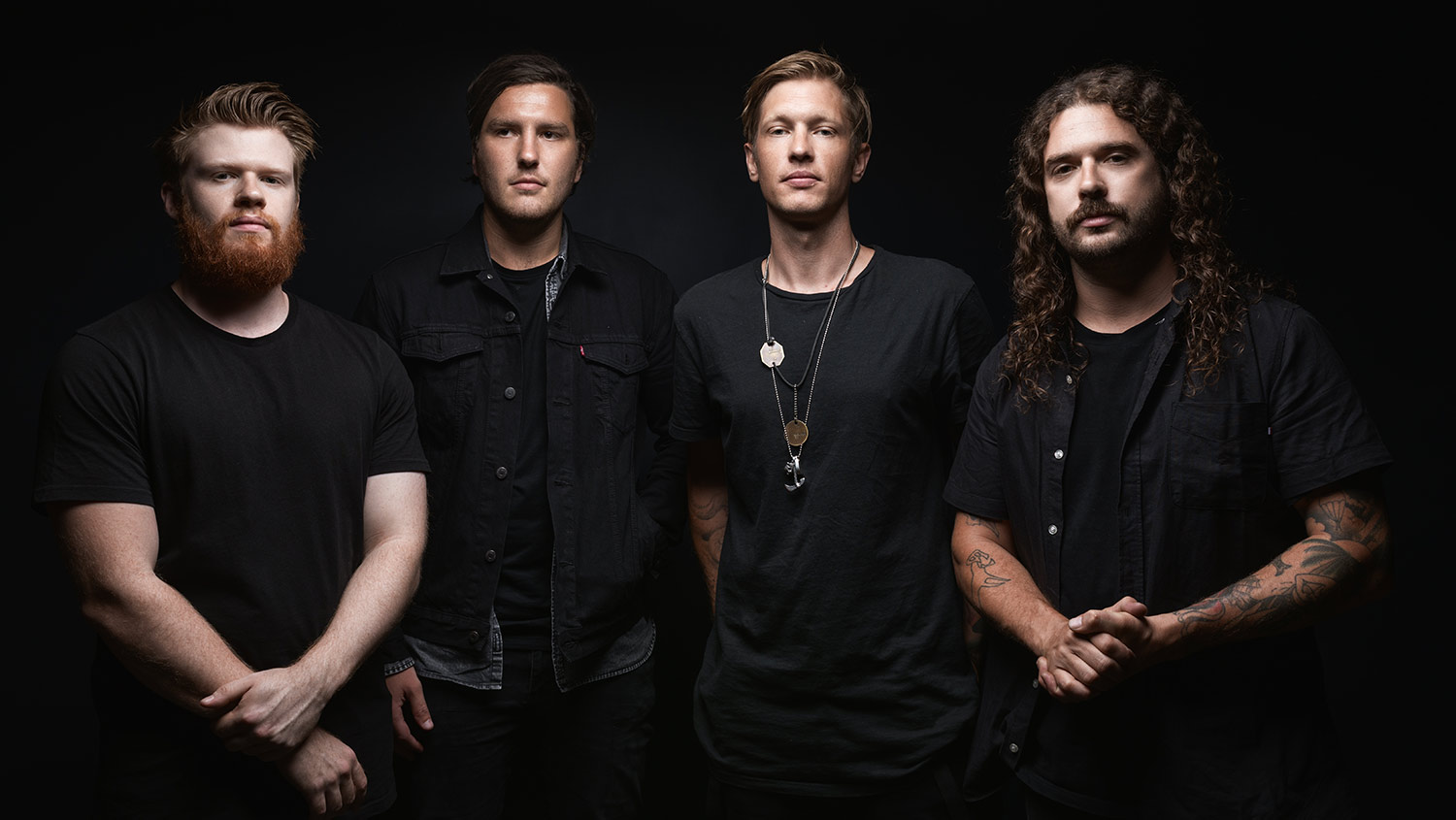 Since some Toontrack customers may be new to Rival Fire, tell us briefly about the band!
Rival Fire is an alternative rock band based in Melbourne, consisting of Rob Farnham (vocals), Kieran Rafferty (drums), Tim Smyth (guitar/vocals) and Zac Connelly (bass/vocals). Our debut album ‘WAR’ was released in August 2017 and included smash singles ‘Riot’, ‘Slave’ and title track ‘War’. Over the past few years, we have honed, refined, and embellished our sound through performing live, and pushing ourselves in both heavier and softer directions. The band has just also finished a SOLD OUT Australian East Coast tour supporting The Butterfly Effect, playing to huge crowds in Melbourne, Sydney, Brisbane and Adelaide. In addition, we have also been on tour supporting the likes of Dead Letter Circus, Birds of Tokyo and Superheist.

You just released your debut album “War” through Sony Music. What lead up to you guys signing with them? Must be awesome with a major label already for the debut album?
Yes! It was such a dream to sign with them. I’ve been in bands since I was 16 and I’m 36 now, haha. Been in a heaps of different bands (mostly heavy stuff), but I was always playing guitar! But vocals are my passion, I love playing shows and writing so much it’s almost compulsive, haha. It’s the only thing I really enjoy doing. And I’d like to think I’ve worked hard to get to this point. But back to the question… We sent the album to a few labels in Australia, and Sony came back! They really took a risk with us, and we thank them for it. We basically made the album and hadn’t done many shows at the point, so we were completely unknown. They helped us a lot! For them it was about looking forward and they, I guess, could see something! We were super proud of our first album, and it was so much fun to make. We were just a bunch of mates who had a few ideas! I had a hook-up with a US producer and we all flew over to do an EP with him! But there came a point where it was necessary to do a whole album before we could move any further than what we had done. The answer from labels, publishing and agents was basically: “do you have more?” So we got together a bunch of more songs. We spent a lot of time together working on parts, vocals and everything in between. Our former Drummer Matt D’arcy had a hook-up with Mark Needham (The Killers, Imagine Dragons, Chris Isaac, Fleetwood Mac just to name a few) and we sent him our VERY ruff demos. He agreed to work with us! So I sold my car and some other bits and pieces and we flew to L.A. to work with him. We came back with “Rio”, “Take the Fall”, “Badman”, “Clipped Wings”, “Doctor” and “All by Yourself”. And we were stoked! He was rad to work with! We definitely could have worked with an Australian producer, but I wanted to do something different. And we did. We got signed off the back of those songs.

You worked with Forrester Savell for the production of the album. Forrester, who’s also responsible for The Progressive Foundry SDX for Superior Drummer, is arguably one of the most prominent mixers/engineers/producers in Australia (and elsewhere, for that matter). Was he the first and natural choice for you and how was it working together?
Forrester Savell is somewhat of a legend in the Aussie ‘rock’ scene! I knew about him maybe 2003-ish.. He was known for making GREAT sounding albums and definitely the go-to guy if you were in a heavy band. The guy knows his s**t and continues to create amazing sounding records! He is a producer that evolves with the times and equipment and doesn’t get stale, well respected and is assertive with his opinions but open to debate. I think that’s the sign of a great producer. We actually didn’t work with him as a producer on our album, but he mixed “Slave”, “Wae”, “Addiction” and “Dreams”.He did an amazing job. He was definitely someone I wanted to work with over the years, and I got to see his skills in action. The guy is crazy knowledgeable musically and technical. We will definitely get him to mix our next album, without a doubt!

Australia has really had an upswing in delivering great progressive rock and metal bands the past few years (Twelve Foot Ninja, The Butterfly Effect, Karnivool, Dead Letter Circus to name a few). Is there a community among these bands and in the overall scene?
Oh, absolutely! Most of those bands all came up together back in the day. Maybe 10-15 years ago there was quite the movement of amazing bands pushing boundaries. And they continue to do so by ceating new and interesting music, and I really believe those bands have an original Australian sound and style. I mean, there were even more bands that have broken up that really set the tone for some of the bigger bands like mentioned above. The live scene was fantastic for breading great artists. Australia has some amazingly talented songwriters, players and singers and there was kind of an explosion of awesome bands. The Butterfly Effect, in my option, really opened the door for a lot of these guys. Combining massive vocals with amazing hooks, big guitars and solid beats and making it palatable. Guys like Karnivool, Dead Letter Circus, Cog and Twelve Foot Ninja really created their own sounds. I’m not a huge progressive rock fan, but I love those guys. These guys make prog fun! You don’t have to have a masters in music to get what they do.

We read an interview where you said that you tried to write five songs a week to keep learning and honing your craft. Is this something you still do?
Absolutely! I’m all about high turnover of songs. I’m not precious about them either, if they suck they suck and if they’re usable, then awesome! I love writing and trying new things. Rival Fire isn’t trying to reinvent the wheel, but I just enjoy creating. Even if one song out of ten is usable, it doesn’t matter. For me, it’s about working with people you trust and can see your vision or change your direction completely. Music is awesome like that. You grow each time you are in front of Pro Tools or any other DAW – or when you’re working with different producers and engineers. I’m not a very good guitarist! I get so frustrated with my playing. I know what I want to hear, but I can’t do it, haha! So, for demos I program everything. The same with drums, bass, synths! Really enjoy using MIDI, but I’m still learning. Always learning.

You recently started working with Superior Drummer 3. How do you think (or already know) that the program will help in your creative process?
I started using Superior Drummer 2 about 6-8 months ago when a friend put me onto it. And wow I thought it was absolutely amazing made my workflow so much faster! And now using Superior Drummer 3 I don’t think I could ever use anything else. It sounds awesome straight away! Even just to get a vibe dragging in pre-made beat, it just makes life so much easier when writing. I’m not great with pulling EQs, and with other programs I’ve used in the past it always sounds “like MIDI”, but with this product it sounds so big and real! It definitely invigorated my writing in a huge way. Rival Fire is in the process of writing our second album and to be able to use a program this powerful sending full song demos to the crew feels solid. I can send our drummer a song with the Superior Drummer 3 MIDI, and he can shuffle things around and send it back. It makes it heaps easier for all of us. There is no need for me to use any other drum program. When we do pre-production we use an e-kit run through Superior Drummer 3 to capture the MIDI. It just makes life easy.

What’s next on the agenda for Rival Fire?
So we like to do a lot of shows. We finished an 18-run show tour as main support for The Butterfly Effect. 16 of those shows were sold out, playing to solid crowds in 1000-1500 seaters. Then we did a small run on our own up the east coast of Australia. We need to do a lot of shows at the level we are at. As a group we love playing live! But at this point in time we are in “demo” mode for our next album. Over the last year or so I have written about 30-40 demos and we have shaved it back to about 12. A few of the other lads have put in songs as well, bringing our ruff demos to about 16-17 solid ideas. The great thing about the guys I work with is everyone is a writer and we are constantly sending each other things to work on. It’s great! We also have a friendship with Dead Letter Circus. We were lucky enough to do a national tour with them in 2016. They treated us with respect and love. Luke Palmer and Clint Vincent produced four of the songs on our album “War”. Those guys are super easy to work with, and both very talented each in their own right. Being able to bounce ideas for our second album off them is fantastic. It’s nice to get constructive criticisms from them. They get the direction we want to go. We are very much looking forward to working with them on the next album. Another bonus is Foz (Forrester Savell) produces Dead Letter Circus’ stuff, and they are very close with him outside of music and professionally. So it’s a nice easy step to work with him on mixing as both Luke and Clint know what he is looking for and the communication is 100%.