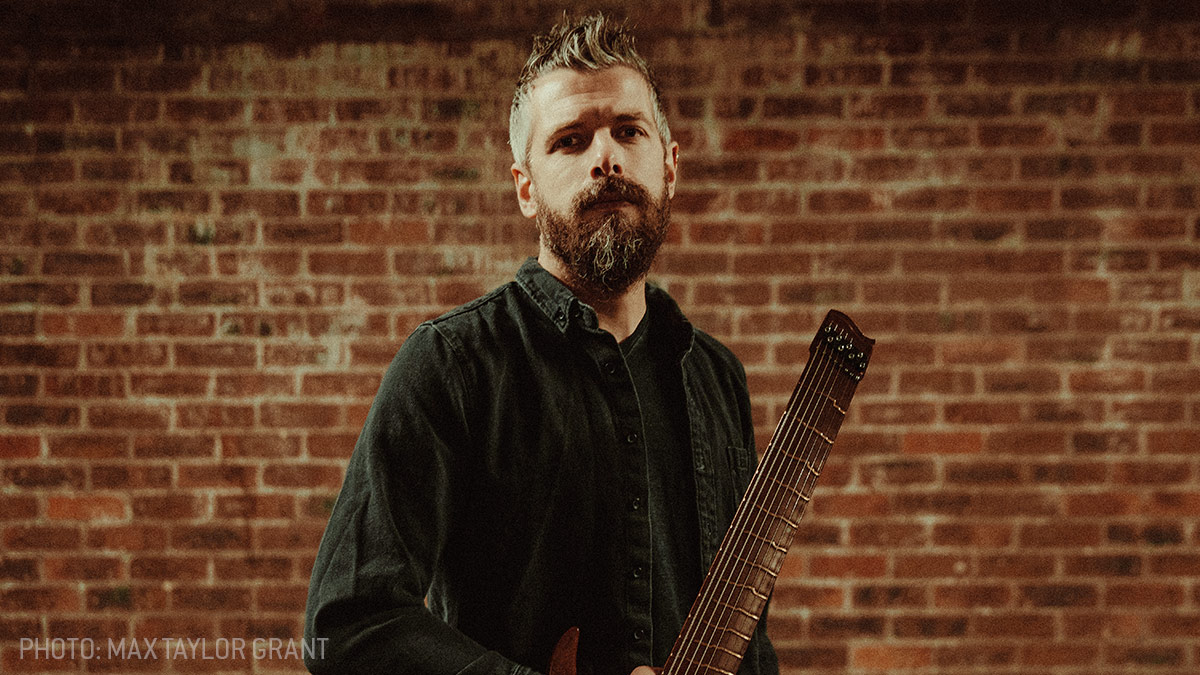 To start off, let’s rewind to the very beginning and talk about how you first discovered your interest in music.
My mum was a piano teacher and my dad was a music enthusiast, so I was introduced to music at a young age. Being in this environment definitely inspired me to pursue a career in music. My Dad used to bombard me with the likes of Pink Floyd, Queen and Dire Straits, which formed the foundations for my music tastes. He used to have a beaten up acoustic guitar lying around the house, which I used butcher my way through songs like “Wish You Were Here” on. My mum used to teach piano at the weekends, so a lot of my earliest musical memories are of waking up to sound of Hanon exercises and scales being blasted out from the piano downstairs. From time to time there would be an amazing student ripping out some Bach or Chopin, which got the musical cogs turning in my head. I guess it was around this time that I formed my love for music.

Was guitar always your one and only option? What got you hooked on the instrument and which are some of the players that you think helped shape your sound?
I started my musical journey on the piano at the age of six or so. I still play it regularly and depend on it when composing. The ideas I come up with on guitar tend to be riff-driven and more focused around rhythm, whereas the piano helps me provide color and texture to the arrangements. I also experimented with clarinet and drums for a while until I discovered my love for guitar at around the age of 11 and have been playing ever since. One of my first musical obsessions was Radiohead. My love affair with them started in high school when my Haken compadre, Ross Jennings, and I attempted to play a bunch of their music in a cover band. I think we were around 14 at the time, so I’m sure our renditions left a lot to be desired, but even so, learning those songs taught me a great deal about crafting music. As an aspiring guitarist, I was particularly drawn to Jonny Greenwoods atypical approach to guitar. He has a knack for coming up with guitar parts that no one else seems to be able to think up. To this day, I still reference his playing and tones when I’m looking for something a little outside of the box. John Petrucci has also been a huge influence on me as as guitarist. When I was around fifteen I was at a metal club and I got talking to the flyer guy outside about guitar-based music. The topic quickly turned to guitars players and I remember claiming that Kirk Hammett was the world’s greatest guitarist. He said “no disrespect to Hammett, but you need to check out John Petrucci from Dream Theater.” At that point I had no idea about Dream Theater, so the next day I followed Mr Flyer Guy’s advice and went out and bought “Awake.” I distinctly remember listening to “Erotomania” with Matt Marshall (ex-Haken guitarist) and Ross Jennings and instantly feeling sick! I’d never heard anything like it before and was completely floored by the musicianship and songwriting. It was pretty hard to believe that five guys could create such a huge sound! This album was my first introduction to prog metal and served as a gateway to all the other amazing stuff out there so it’ll always hold a special place album for me.

Today, which guitarists do you think stand out (in any genre)?
There’s a crazy amount of guitar talent on Instagram. It’s pretty overwhelming at times! One guy that sticks out for me Joshua De La Victoria. His grasp on rhythm is incredible and his ability fluently rip a solo over his polyrhythms is very impressive. Another guy that constantly blows my mind is Jakub Zytecki. He’s one of the most creative guitarists out there and has his own thing going on. His chops are pretty scary too, but they’re always delivered in a tasteful way.

What is your creative process like? Walk us through how typically a Haken song go from its first initial idea to a fully fledged song.
The way we write music has evolved a fair amount over the years. Back in the early days I used to handle the bulk of the writing when it came to the music, but nowadays it’s a fully collaborative process. For the last two albums, we’ve had an online file sharing space, in which we bounce ideas back and forth. Sharing ideas and communicating with each other on the Internet has never been easier. Someone will pick an idea to work on, and then present it back to the rest of the guys. In some cases it means that we can be working on four or five ideas simultaneously, which has proved to be a really efficient way of working for us. We also try to meet up in person as much as possible to build songs from scratch. These sessions always provide different results, which helps add range and balance to the whole album. For my solo stuff I just bounce ideas off myself, which can sometimes be tricky. I often end up going round in circles for months so I’ve learnt to try and capture the ideas as quickly as possible in their rawest form and move onto the next section without too much deliberation. I’ve found that focusing on the broader strokes of a composition rather than the finer details is the best way for me to work. Once the bigger picture is realized I can then go back and fill in the gaps.

In this process, which Toontrack products do you use and how do they help?
I’ve been using Superior Drummer 2 for years now, since the days when you had to upload the whole library by disc! It’s undoubtedly helped the creative workflow in the studio and allowed me to get ideas down as quickly as possible. In Haken, we try to make the demos as close the finished version of the track as possible, so having super authentic-sounding drums really helps with this process. I recently switched to Superior Drummer 3 and tried out EZbass and couldn’t be happier with how they sound. Superior Drummer 3 has a huge range of presets which will give me a lot of creative freedom. I can’t wait to road test them on some new music.

You’ve been with Haken now since the very start and you’re coming up on almost 12 years since your first album “Aquarius” was released. What would you say some of your personal highlights along the way are? Any standout moments or events that you will remember or cherish forever?
Time has flown by! It doesn’t feel too long ago that we were shredding away in our bedrooms dreaming of forming a band. One standout moment for me was our first trip to the US. We played at Prog Power USA in 2011 around the time of the release of our album “Visions.” It was one of those moments that cemented the idea that we could maybe grow Haken into something special. We received a very warm welcome and have been back a few times since, so Centre Stage in Atlanta will always have a special place place our hearts. Another big career highlight was playing the Shattered Fortress tours with Mike Portnoy. Dream Theater’s music has been a huge part of my growth as a musician, and has been a constant source of inspiration over the years. I’ve grown up watching Mike on the stage for years with Dream Theater, and was always awestruck by his ability to engage with the crowd whilst playing such demanding music! To have had the opportunity be able to share the stage with him and play this amazing music was an incredible honor. I’m eternally grateful to Mike for the experience.

You’re also involved in some other bands and collaborations. Walk us through the entirety of the Henshall “empire!”
Around about six years ago, Dan Briggs and I formed a band called Nova Collective and released an album called “The further Side.” It’s essentially an experimental jazz instrumental record that was that was real labour of love. The music really feels like an amalgamation of all of our tastes. We’ve been talking about a follow-up, so hopefully that will come into fruition soon. A couple of years back I released my debut solo album entitled “The Cocoon.” During the lockdown, I’ve been working on a few other solo projects that will hopefully surface at some point in the near future. And there is course Haken which will always be my primary focus!

Out of everything that comes with being a professional musician – writing, recording, jamming, touring, traveling (the list goes on)…what is your favorite part and why?
Writing has always been my biggest passion. I love the fully immersive nature of locking myself in my studio and getting lost in an idea. There’s something magical about creating something from nothing that’s often tricky to articulate with words. Apart from being away from my family, touring is a lot of fun too. It’s a great opportunity to meet some of the fans that make our job possible, and eating the same hummus and cheese sandwich every day is a real treat too! I also feel lucky to have the chance to stand next to my band mates and play the music we’ve created together each night.

Do you still practice your instrument regularly? If so, what does your routine look like?
I don’t practice half as much as I should do! When I was younger, I was fairly militant with my practice routines and used to structure my sessions so that I covered a range of things. Nowadays I don’t have as much time as I used to, so I try to explore new musical concepts and techniques whilst writing music. It’s all about multitasking when you’re a parent! A typical day for me would be to drop my kids off to school, make a tea, pick up a guitar and stare at a screen for nine hours! Also, practicing for Haken tours keeps my fingers busy and definitely keeps chops in check. I recently put out a tapping course with JTC Guitar, which was a good excuse to get back into the more technical side of my playing. 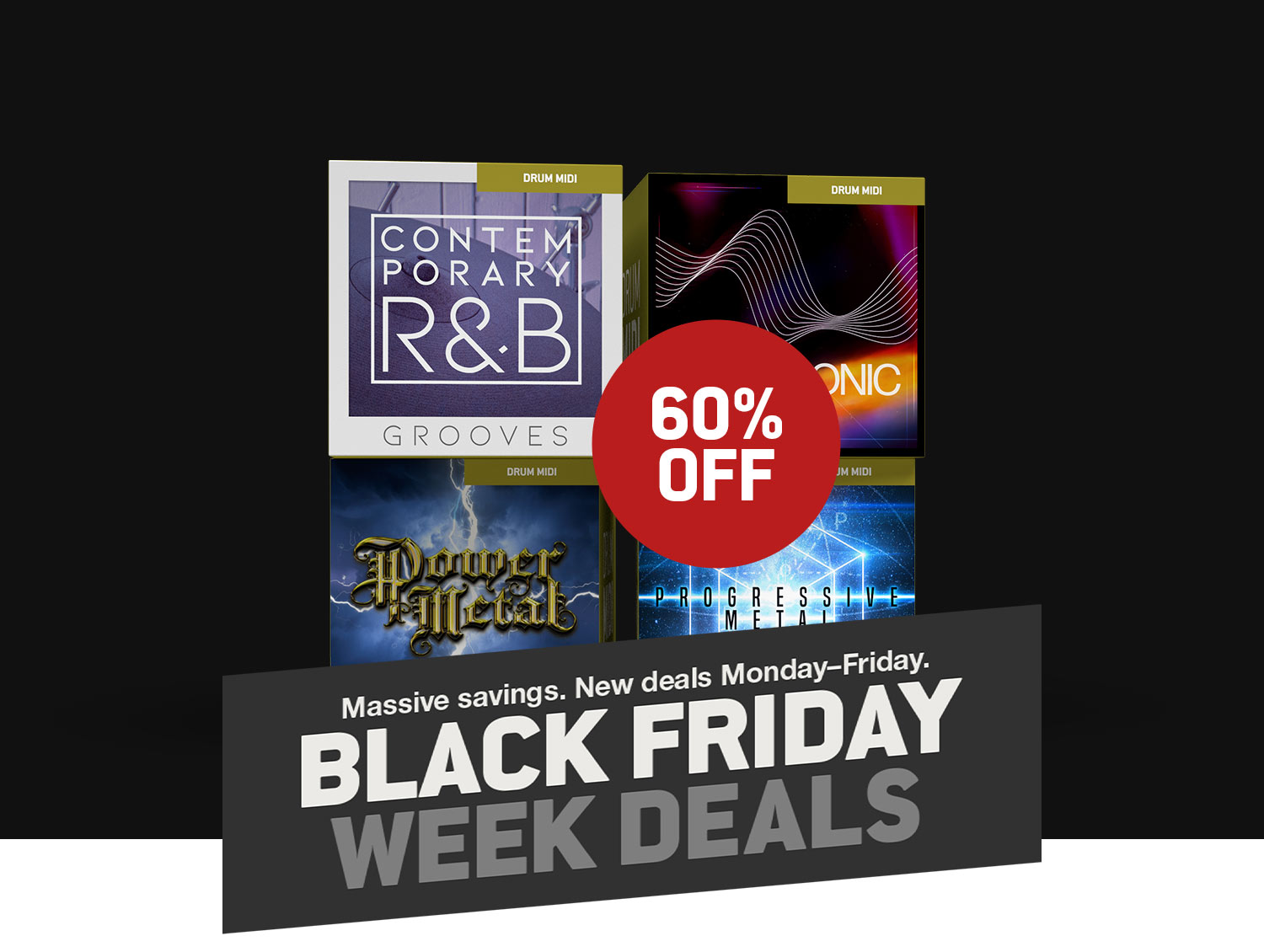 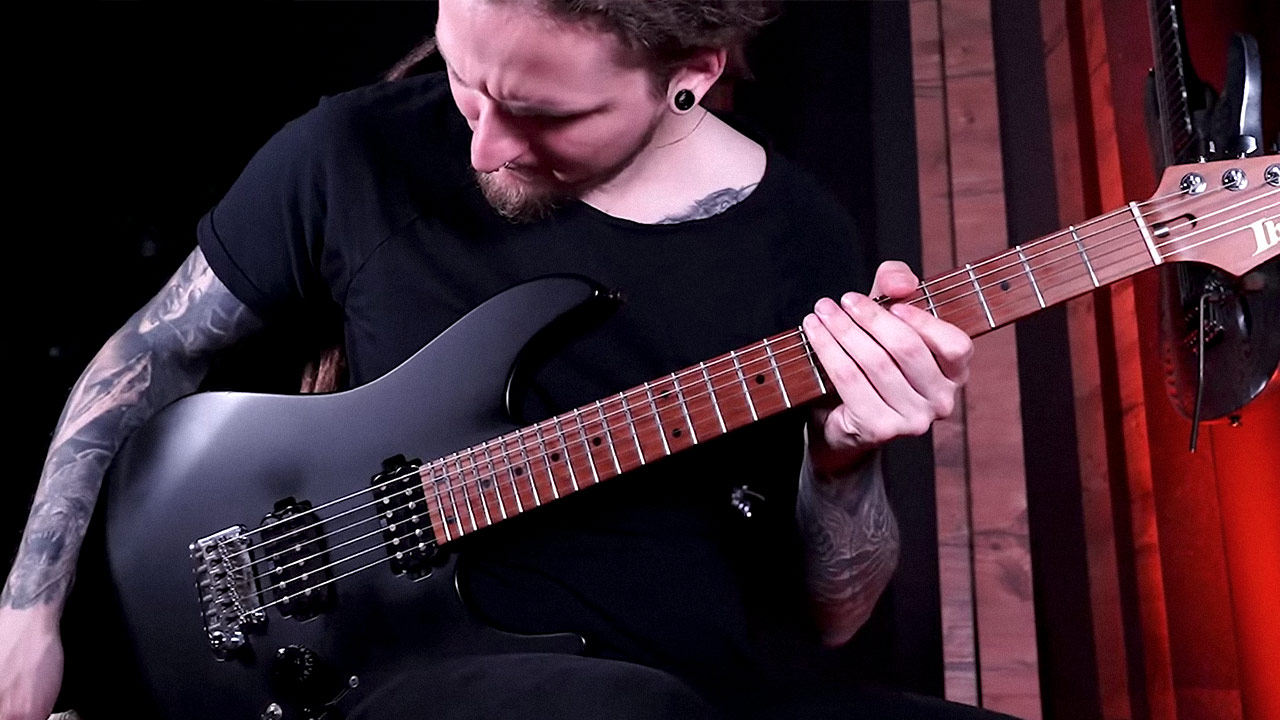 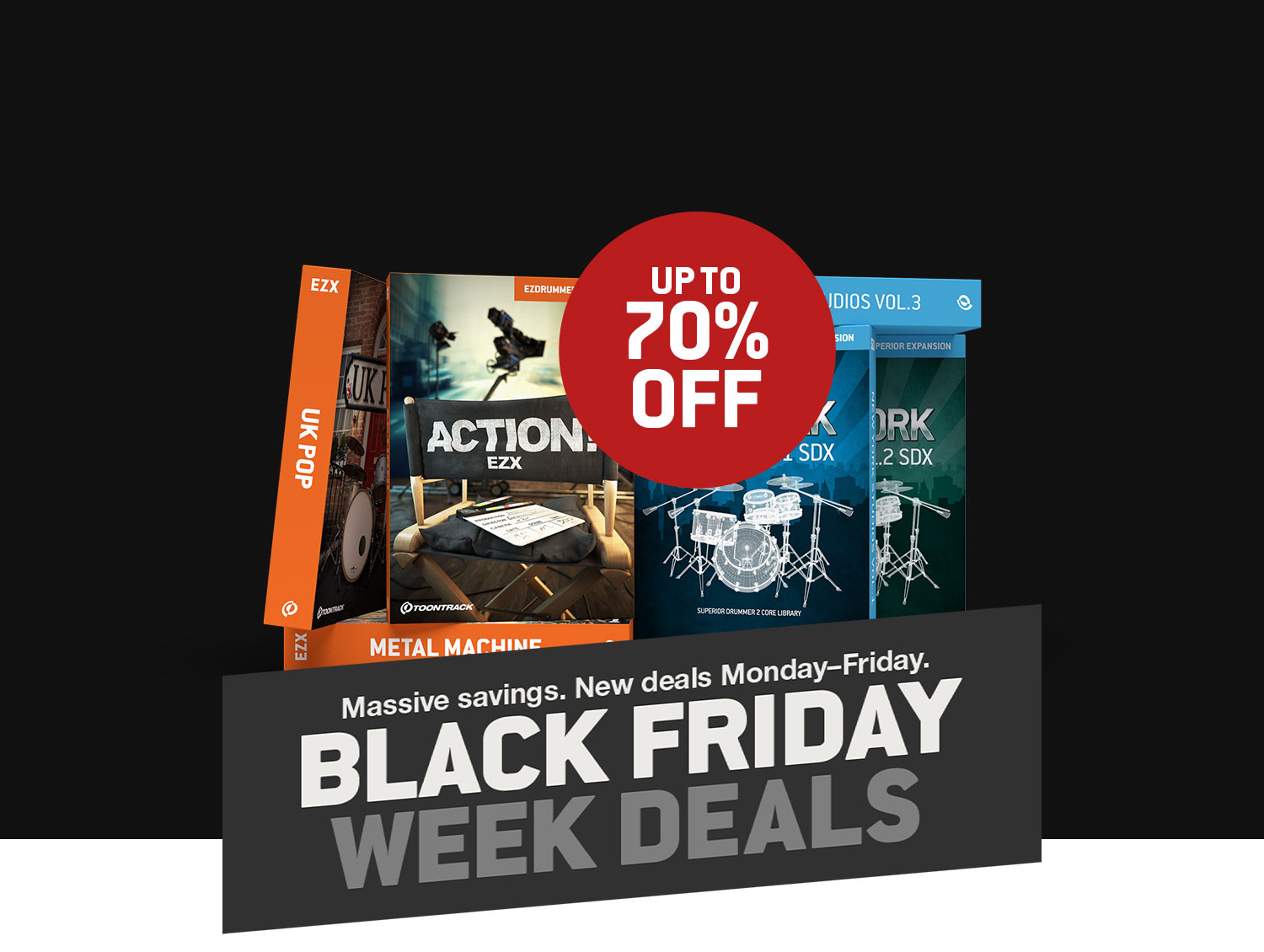 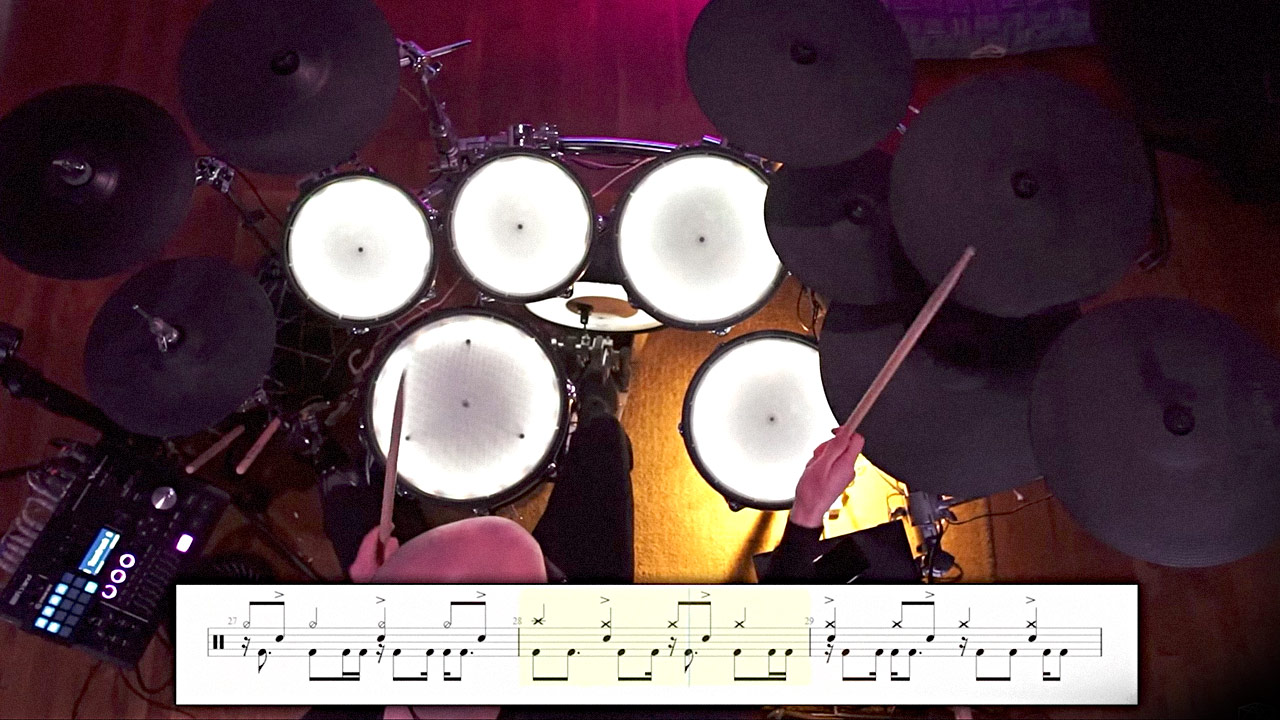 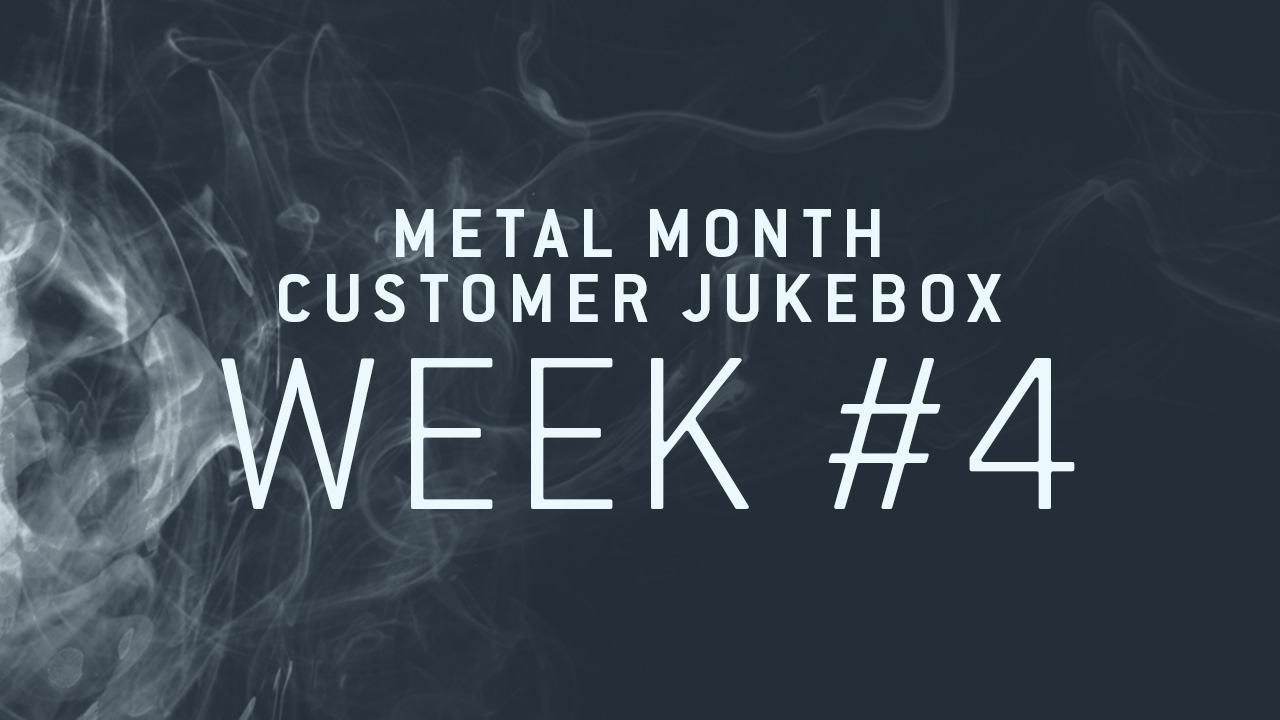 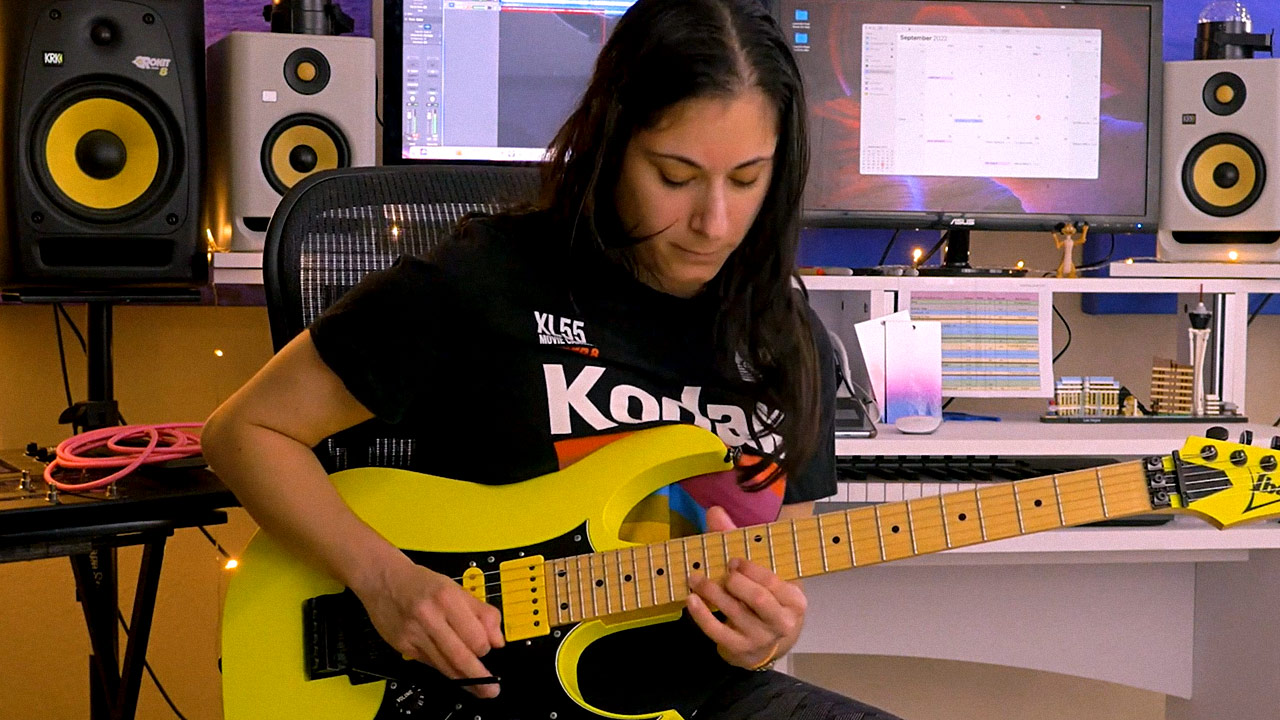 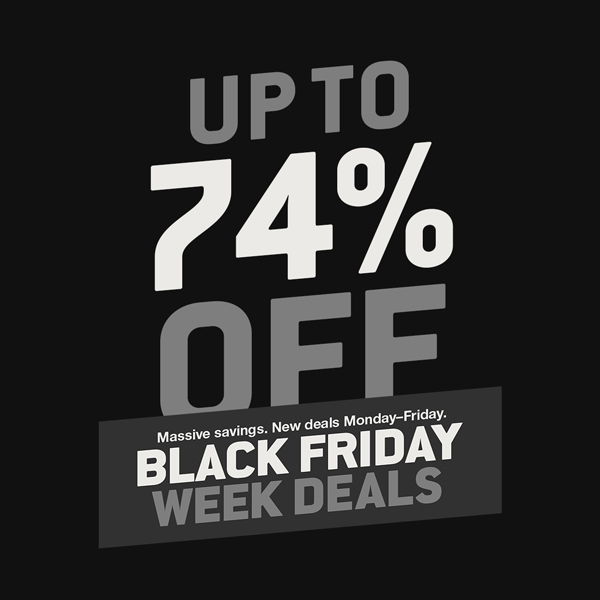 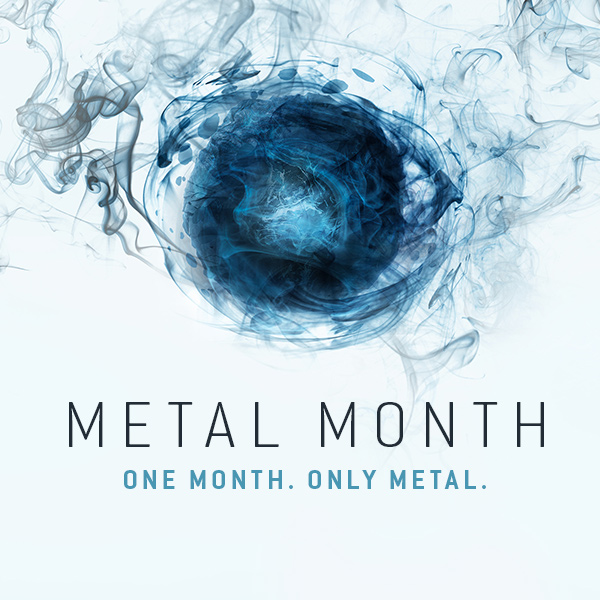 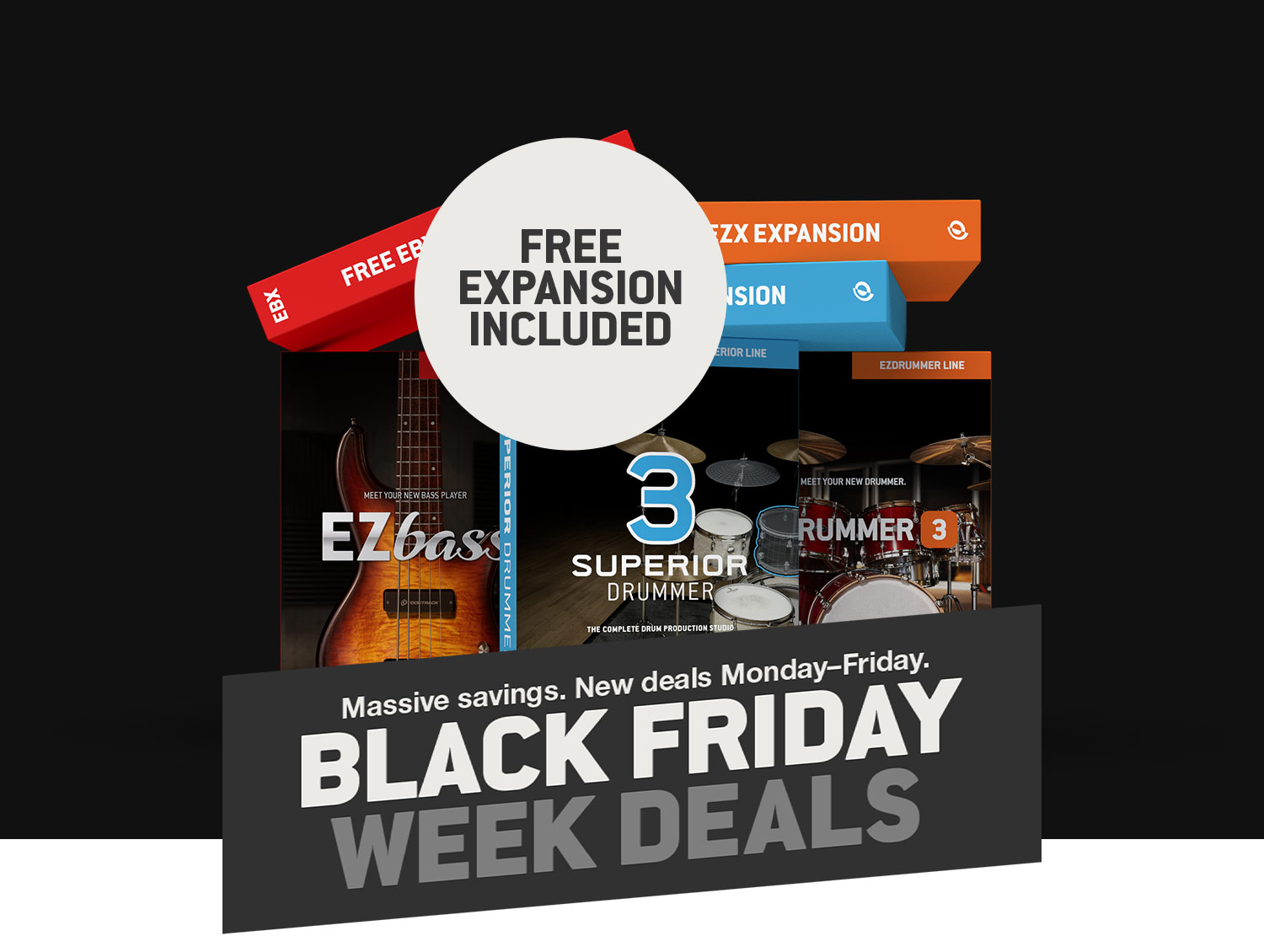 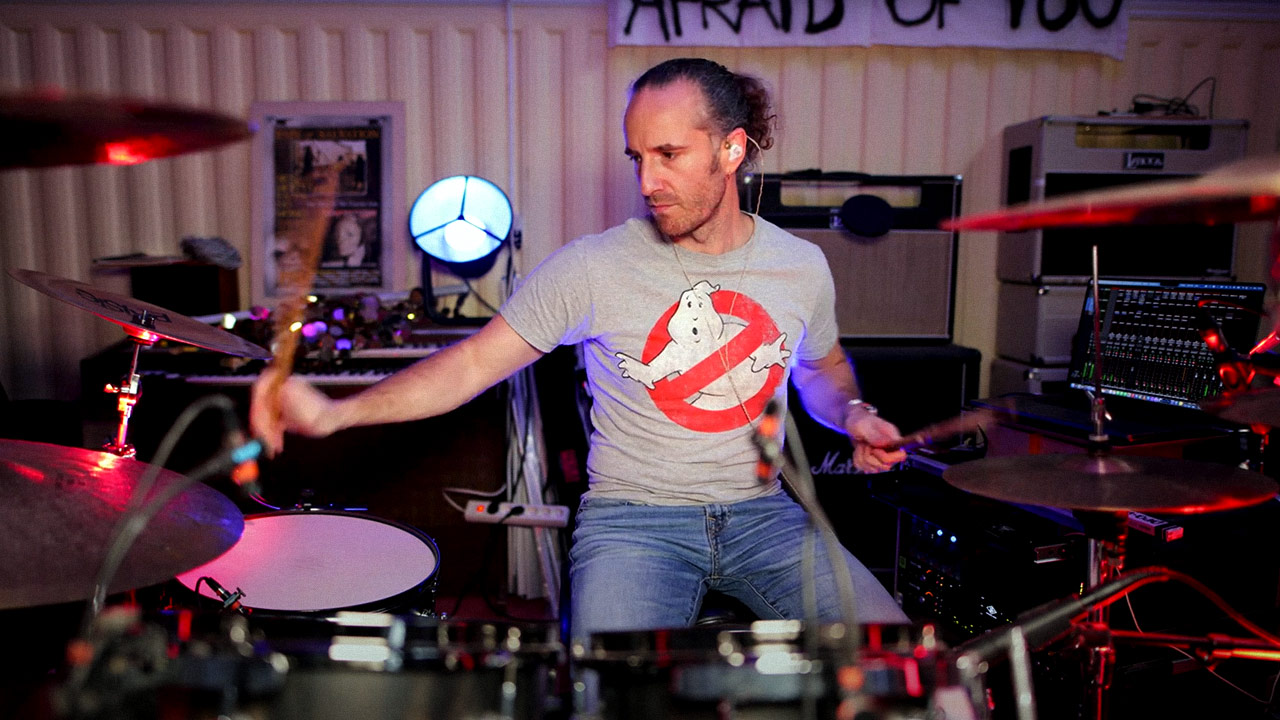 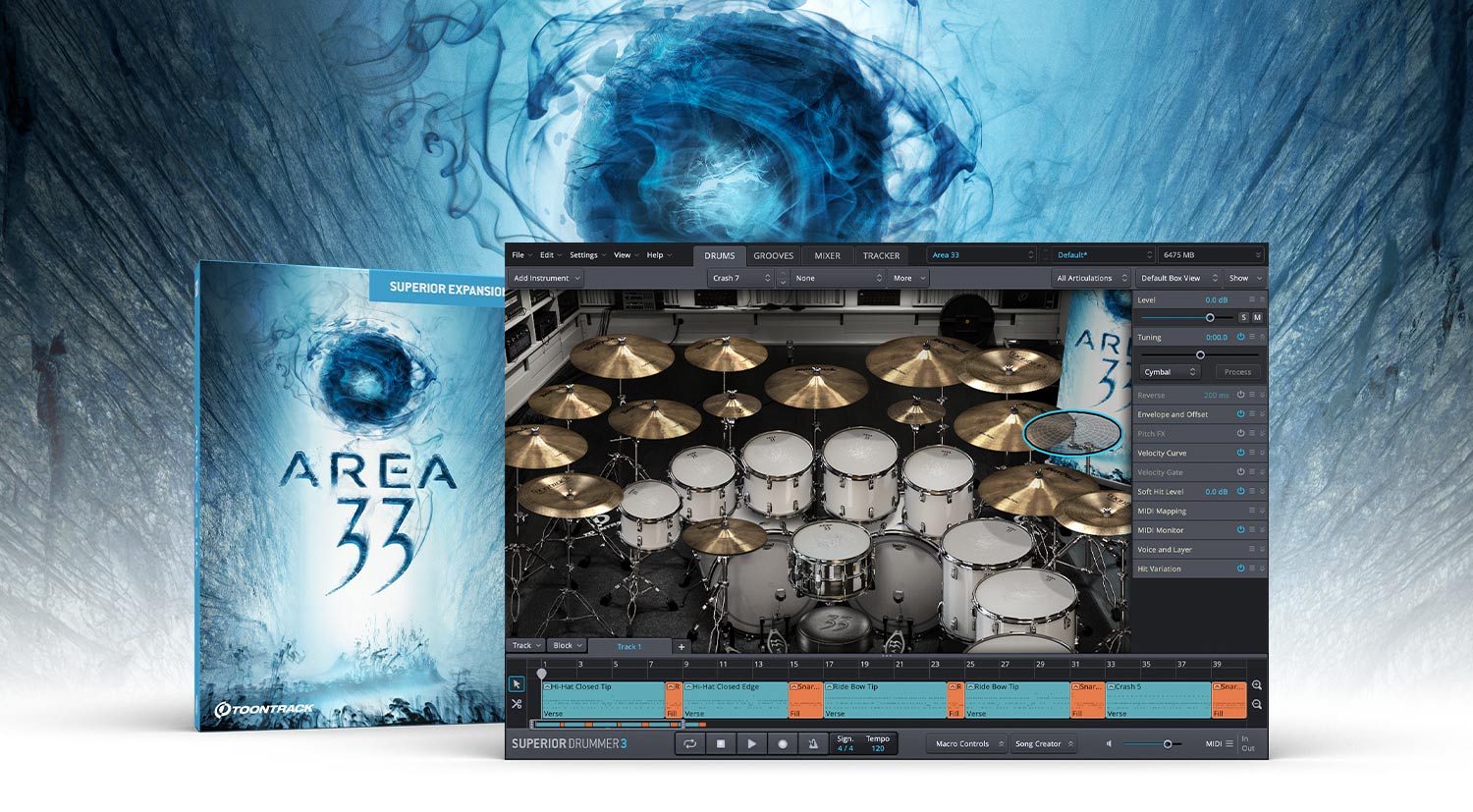 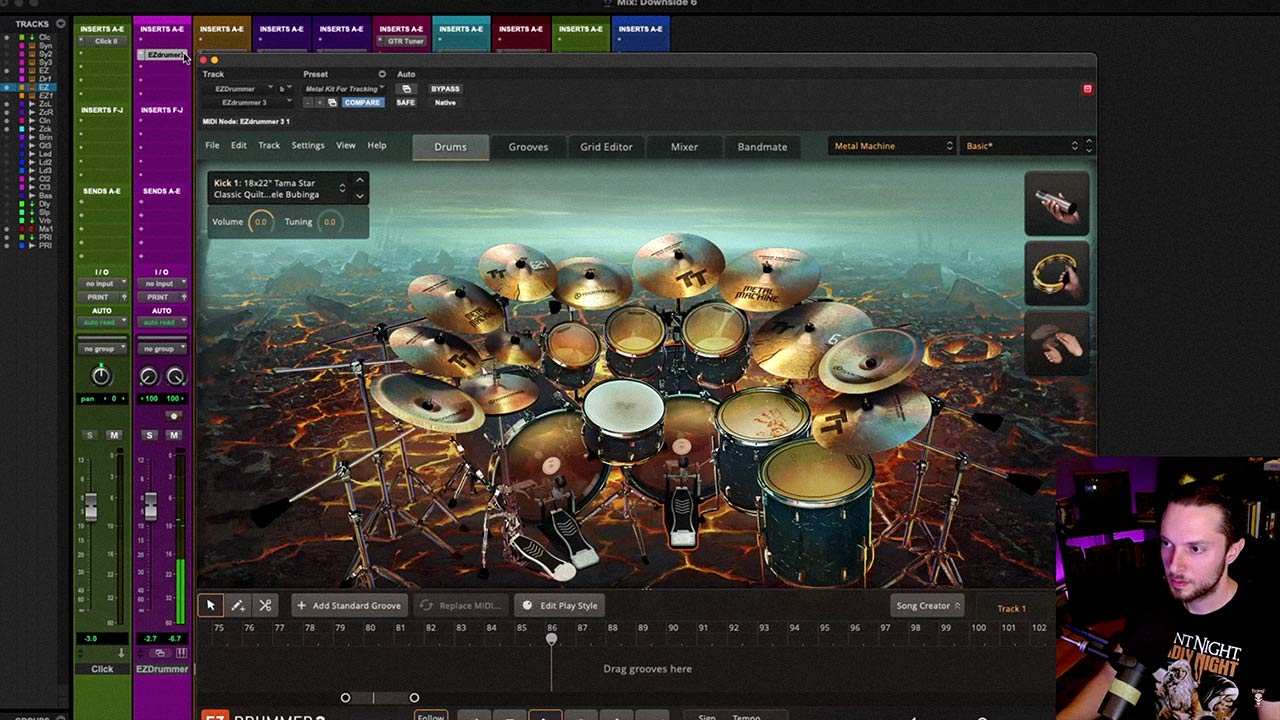 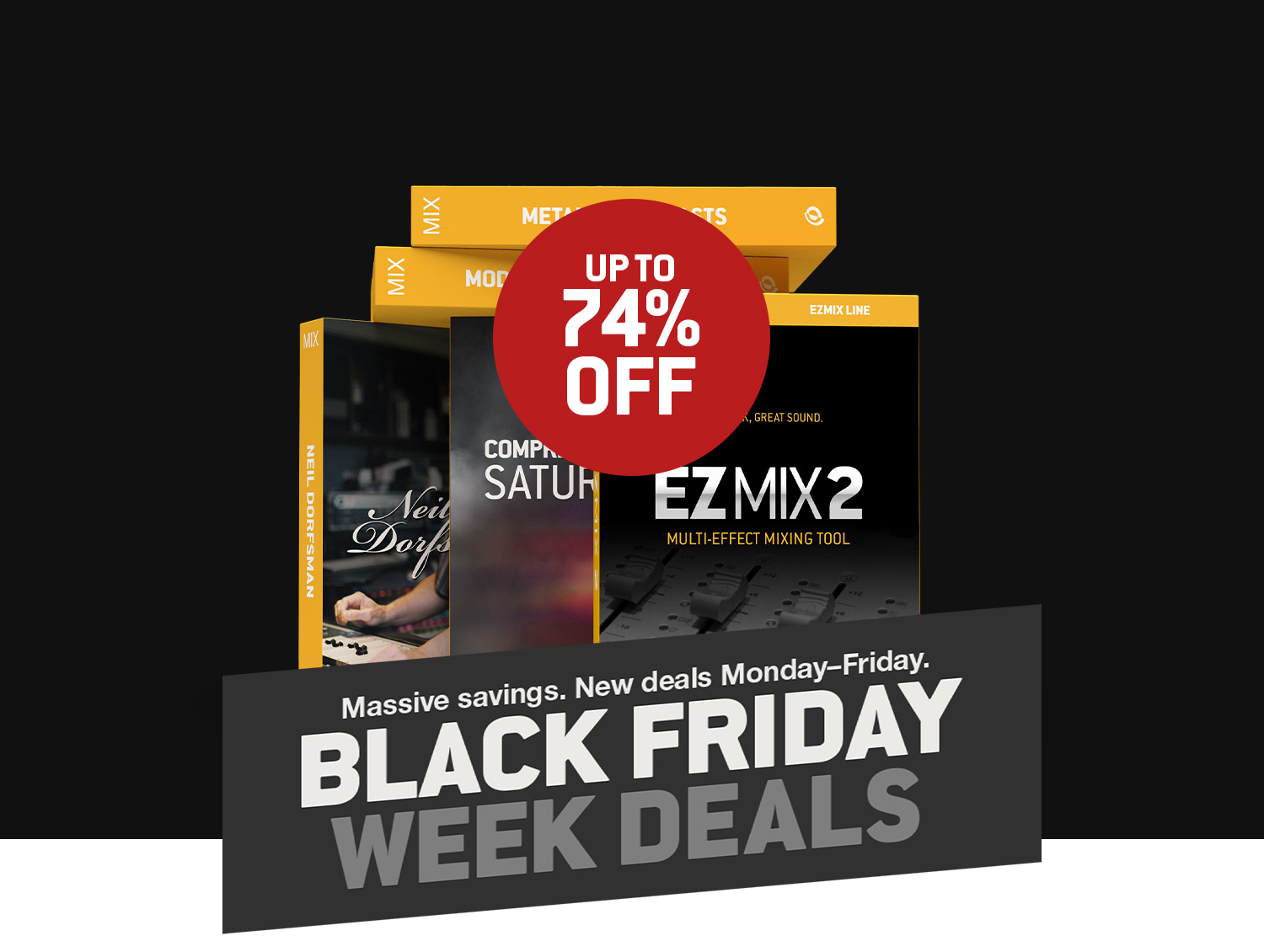