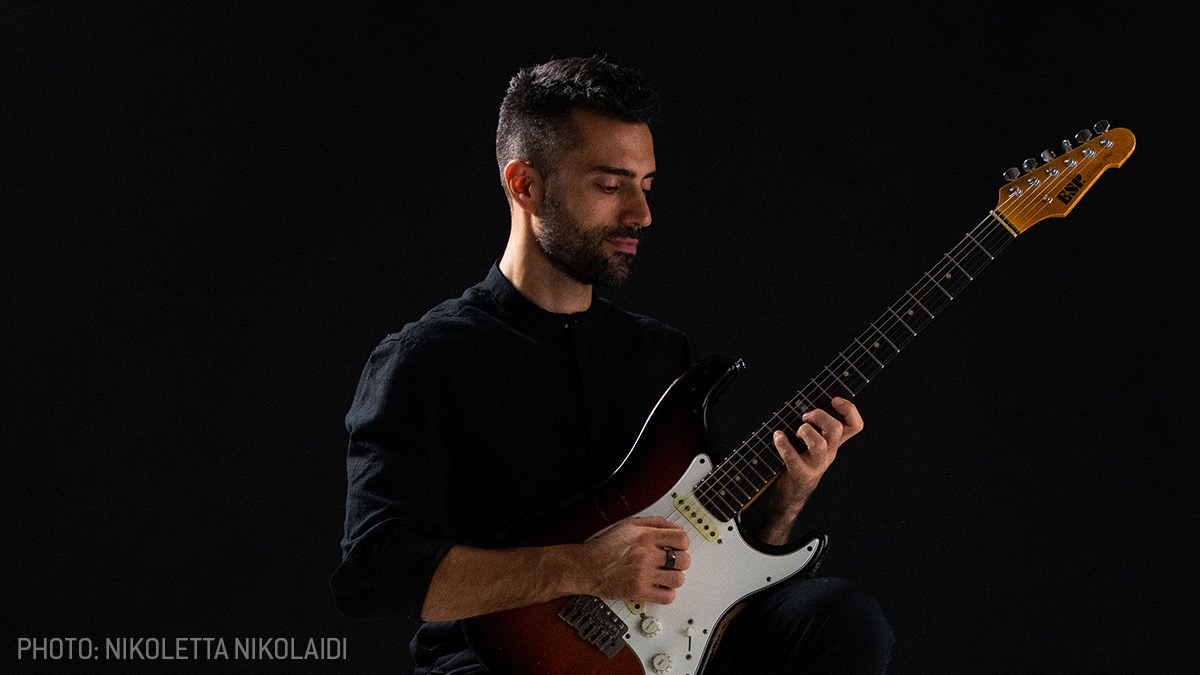 If we go back to the very beginning, how did you discover your interest in music?
Listening to music was always an activity for me as a child and not as something secondary. I was always sitting with the lyrics in front of me, reading while listening and visualizing the pictures described, trying to understand the meaning of the words or fantasizing I played the…drums! Part from that, before I even got my hands on a musical instrument at around when I was 12 years old, I had a need to convey my emotions and thoughts into little lyrics, ideas or poems. It’s wasn’t music, but I was already on the creative side of things when I started playing, something that really helped me along the way.

Was guitar always your one and only option? What got you hooked on the instrument and which are some of the players that you think helped shape your sound?
Well, it’s a funny story because guitar was my last option. When I was about 14, I was really struggling to convince my parents to get me a drum set, something I never managed to do, so I ended up with a used guitar a friend of mine gave me at the time. It had five out of six tuners, but this didn’t really bother me. I spent the whole night acting as if I knew how to play over some Bon Jovi, Santana or Scorpions songs. I literally slept with the guitar on me and from the next day, nothing felt more right than practicing guitar and exploring the world of music. Now regarding the players that shaped my sound early on – or rather the players I was admiring the most – were, undoubtedly: Joe Satriani, Jimmy Page and Jimi Hendrix. We even had a habitual Saturday night ritual with some friends where we would just re-rent and re-watch the “G3 – Live in Denver” or Led Zeppelin’s “The Song Remains the Same” DVDs – yeah, we had to do that back then, kids – over and over again.

Today, which guitarists do you think stand out (in any genre)?
This is a really tough one. I don’t think there ever was a time in history with so many unbelievably great guitar players alive on earth pushing the boundaries of guitar in so many genres at the same time. If I had to name a few for completely different reasons I would go with Mateus Asato, Julian Lage, Matteo Mancuso, Chris Buck,  BAXTY, Tim Henson – just to name a few. I didn’t forget the Guitar God (a.k.a. Guthrie Govan), he is just out of our human league.

What does your personal writing spot or home studio look like in terms of gear?
It’s all about embracing minimalism when it comes to working spots for me. Finishing an idea is a difficult task in itself and having more options than I need really makes it even worse. I’d rather use whatever I ‘m sure works and keep it simple. That being said, I use a simple audio interface, mic, a lavalier mic, camera, my Kemper, a decent pair of monitors, my Cubase, Guitar Pro,  EZdrummer, some other plugins, many notebooks, a whiteboard and that’s basically it. Regarding my guitars, it comes down to my ESP Horizon NT-II, my ESP Vintage Plus and an Alvarez acoustic electric guitar.

You’re probably best known for your progressive/fusion/rock/metal-related stuff, but you’re also touring and recording with several popular pop and RnB acts. What is that like?
Great one! I really enjoy being a session player too and the main reason is that I pick my jobs. If I don’t see myself in a project, I just don’t get into it. So, I’m always playing with musicians that I admire and for artists that allow me some space for my creativity and sound. Being a part of such big productions and giving shows in large venues, TV/radio appearances puts your accountability skills in practice while at the same time it’s one of the most fun things to do. There’s a totally different skill set needed for this job, like being able to serve the songs in a more favorable way for the ears of the non-musician, experiment with sounds and find creative ways to create guitar parts in tracks that don’t even have a guitar in them. This whole process really advances your musicianship and broadens your perception.

Aside from being one of the tutors on the JTC Guitar roster, you also offer online guitar lessons. What would be your one best tip to someone who wants to become a better player?
I know you’ve asked for one but I’m so glad you gave me the opportunity to talk about these things here, so I’ll share two.

1. You’ve got to learn how to love to practice. I mean, forget about the outcome. Focusing too much on that will only bring unease and dissatisfaction. Set your goals, find a way towards them (alone or with your teacher) and just do the job.

2. You don’t have to reach a certain point to be able to create. Creativity is a skill itself and you get better at it by…creating! Creativity is a great teacher and it teaches you things nothing and nobody else can. This is something I always tell my students and always encourage them to do. So if you find yourself learning new things and then not finding ways to integrate them in your playing, create with them! Use this tool you’re trying to make yours (arpeggio / chord / scale / lick / whatever) to create a riff, etude, groove, lick, song, simple anything! Make this a part of your practice and trust me you’ll start to see the benefits right away.  Out of all the styles you master…is there one you feel more “at home” with? I haven’t mastered any style and I really don’t want to. I like experiencing all kinds of flavors and keeping things interesting. Also, I really love being able to at least “exist” and to express myself in different environments. That being said, I really enjoy playing the blues (mostly major blues) and freely improvising in a chord-solo manner, something I mostly – almost only – do when I play by and for myself…

Do you still practice your instrument on a regular basis? What does your routine look like?
I try to practice when I have the time, but mostly get my practice benefits out of creative stuff like little etudes for my lessons, JTC stuff, content for my social media (although I’m terrible at keeping a consistent flow of material) and session work. The only routine I have is some kind of technique and rhythm exercises to warm up before I get into working.

Your own instrumental project Chasing Dots has one album out so far. What’s next on the agenda?
I’m really focused on my JTC packages and online lessons right now, so all my creative energy regarding the guitar is used towards these two but I’ll tell you this… If I release something in the near future, it will have nothing to do with guitar.

Walk us through a regular day “in the life of” George Karayiannis!
Well, that highly depends on the period we’re talking about. If I’m doing shows regularly or if I’m near a JTC release, my days change a lot. However, typically I start my day doing some meditation, followed by a breakfast, meal prep for the day (if it’s not already made) and then a long walk with Perla (my dog). After that, most of the time I’ll do my morning lessons, hit the gym, return to do any practicing/package preparation or any other usually creative thing that needs to be done. Then my evening lessons begin till the night and after they’re over I usually write down exercises, ideas, or etudes that might come up during the day or from previous ones. Another walk with Perla and chilling reading or journaling before calling it a day. Saturdays and Sundays I turn the engines down as much as possible to dedicate as much time as I can to friends and family! If I don’t have a show or rehearsals, this is mostly what I do every day during the week these days.

Finally, which Toontrack products do you use and how do they help you in your creative process?
I’ve used EZdrummer 2 since forever and recently got my hands on EZdrummer 3, which is simply even more awesome! The ease of use, absolute killer quality, the fact that there are only sounds/settings/MIDI grooves you are actually going to need and no filler ones, makes it a great companion to work with. As I told you, simplicity is key for me since I really want nothing to get in the way during the creative process. Thanks for the amazing job!